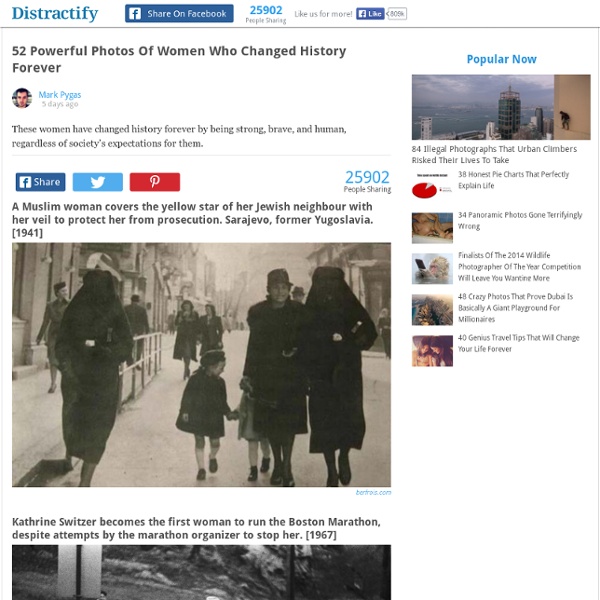 Unlocking the Dark Ages: A Short History of Chastity Belts An intense chastity belt on one of the wives in the new Mad Max film. I got the chance to catch a showing of the new Mad Max and was not disappointed. As I do with most everything in my life, I had my antennae up for any classical allusions or appropriations. 30+ Crazy Photographers Who Will Do ANYTHING For The Perfect Shot Getting the angle and perspective for a photo just right can sometimes be very tricky, but these crazy photographers don't mind – when it comes to taking the perfect shot, they will do whatever it takes. The acts of devotion to their craft that some of the world's best photographers perform can be truly outstanding. Wildlife photographers have spent weeks camped out in the wild, allowing animals to get accustomed to their presence so that they can get the rare or intimate glimpses at their lives that others only dream of. Show 34 more

10 Important Google URLs That Every Google User Should Know Which website has access to my Google account? What does Google know about me? Where can I see ads that I’ve clicked on Google search? Spare Rib Spare Rib was an active part of the emerging Women’s Liberation Movement in the late 20th century. Running from 1972-93, this now iconic magazine challenged the stereotyping and exploitation of women, while supporting collective, realistic solutions to the hurdles women faced. Visitors to this site can explore selected highlights from the magazine; and examine how the magazine was run, why it was started and the issues it dealt with. The full run of Spare Rib magazines can be accessed via Important information for researchers: from 7 June 2016, some material from the Spare Rib magazines on the journals archive site will be redacted until the Library is able to secure further copyright permissions. More information on the redactions can be found here.

Eight Norwegian Photographers You Need to Follow The Norwegian Journal of Photography (NJP) has released the latest issue of its biennial survey of the Scandinavian country’s contemporary documentary photography scene, showcasing the work of eight photographers. The publishers — photographers and photo editors Rune Eraker, Laara Matsen and Espen Rasmussen — combed through close to 100 applications and submissions to arrive at its final list of eight photographers, using funding from the Fritt Ord Foundation, a non-profit devoted to freedom of expression, to produce the high-quality book. “We look for strong voices,” Espen tells TIME, “and we also look for photographers who challenge the term ‘documentary photography’. Do they have a style, something to tell us, do they surprise us or challenge us? Do they create any feelings for us as a viewer?

A Google a Day Find out what you can do with Google Search. It offers more functions than you may know. Advanced Calculator Information site: search only within a specific site site:www.stanford.edu filetype: find a type of file: PDF, DOC, TXT filetype:PDF define: find definitions for a word define:audactiy intitle: find words in the title of the webpage intitle:inspirational .. get ranges of numbers, dates, or prices presidents 1800..1900 word * word find other combinations of words between words creative * writing - word search for homer, but NOT simpsons homer - simpsons + word find exact words - no synonyms or plurals +peace + freedom "set of words" search for exact set of words, quotes or phrases "I have a dream" +-*/ add, subtract, multiply, divide 12+68 % of percentage of a number 12% of 68 cos() sin() trigonometry: cos, sin, tan, arcsin… cos(68) km to miles convert units: temp (C to F), weight (kg to lbs) 100 km to miles

sans titre Women’s reputation as nurturing homebodies who left warfare to men in long-ago societies is under attack. Skeletal evidence from hunter-gatherers in what’s now California and from herders in Mongolia suggests that women warriors once existed in those populations. Two research teams had planned to present these findings April 17 at the annual meeting of the American Association of Physical Anthropologists. That meeting was canceled due to the coronavirus pandemic. The Chinese Art of the Crowd After viewing news photographs from China for years, one of my favorite visual themes is "large crowd formations." Whether the subject is military parades or world-record attempts, mass exercises or enormous performances, the images are frequently remarkable. The masses of people can look beautiful or intimidating, projecting a sense of strength and abundance. Individuals can become pixels in a huge painting, or points on a grid, or echoes of each other in identical uniforms or costumes. I've gathered some of these images below, taken around China over the past several years. (Note: a few of these images can create a dizzying effect when viewed while scrolling, which is fun, but could be surprising.)