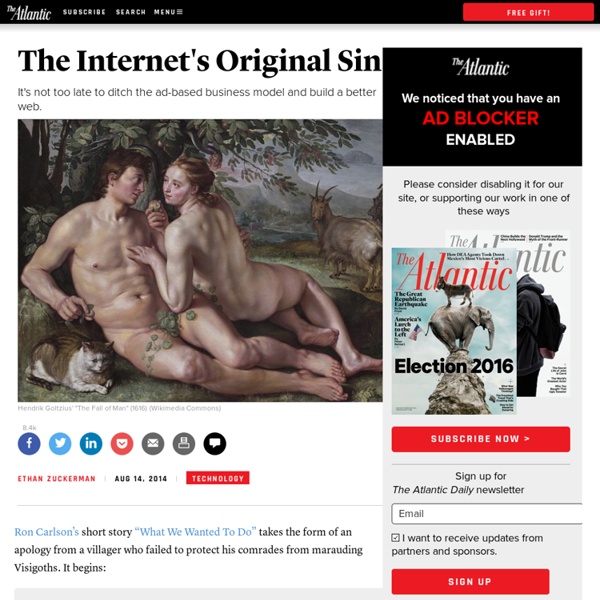 Ron Carlson’s short story “What We Wanted To Do” takes the form of an apology from a villager who failed to protect his comrades from marauding Visigoths. It begins: What we wanted to do was spill boiling oil onto the heads of our enemies as they attempted to bang down the gates of our village. But as everyone now knows, we had some problems, primarily technical problems, that prevented us from doing what we wanted to do the way we had hoped to do it. What we’re asking for today is another chance. There’s little suspense in the story—the disastrous outcome is obvious from the first paragraph—but it works because of the poignancy of the apology. The fiasco I want to talk about is the World Wide Web, specifically, the advertising-supported, “free as in beer” constellation of social networks, services, and content that represents so much of the present day web industry. The talk is hilarious and insightful, and poignant precisely for the reasons Carlson’s story is. Related:  Internet

The internet is fucked In a perfect storm of corporate greed and broken government, the internet has gone from vibrant center of the new economy to burgeoning tool of economic control. Where America once had Rockefeller and Carnegie, it now has Comcast’s Brian Roberts, AT&T’s Randall Stephenson, and Verizon’s Lowell McAdam, robber barons for a new age of infrastructure monopoly built on fiber optics and kitty GIFs. And the power of the new network-industrial complex is immense and unchecked, even by other giants: AT&T blocked Apple’s FaceTime and Google’s Hangouts video chat services for the preposterously silly reason that the apps were "preloaded" on each company’s phones instead of downloaded from an app store. Verizon and AT&T have each blocked the Google Wallet mobile payment system because they’re partners in the competing (and not very good) ISIS service. We’re really, really fucking this up. But we can fix it, I swear. We can do it. Go ahead, say it out loud. None. This is nonsense, of course.

The population of the internet, in one map How big is the internet? This map from the Oxford Internet Institute shows where the world's internet users live: This is a cartogram, a map in which the area of each country is proportional to its online population, based on 2011 data. So countries with large land areas but small populations — like Canada and Russia — appear shrunken, while dense, well-connected areas like South Korea and Belgium appear larger than life. The most striking region is Africa. The continent has 1.1 billion people, more than three times the population of the United States. That's likely to change in the coming decades. While the United States is more wired than much of the world, the US is not a world leader when it comes to internet penetration. Further reading Who created the internet? In 1973, software engineers Vint Cerf and Bob Kahn began work on the next generation of networking standards for the ARPANET.

The Internet as we know it is dying It was a week of rage, nostalgia and despair on the Internet. Sure, you could say that about any week on the Internet. But last week delivered some prime material. Check out this gamer exploding in fury at the rumor that Google — “The King Midas of Shit!” All is not well on the Web. At Twitch TV, the gamers are worried that Google’s “copyright monster” will tame their freewheeling Wild West and obliterate years of work. It’s a big mess. That’s easier said than done. If you’re not an avid gamer, the kind of person who enjoys watching other gamers narrate their own adventures through the latest first-person shooter, you’ve probably never heard of Twitch TV. But for the gamers who produce much of the content, the idea that Google’s copyright cop, ContentID, might suddenly be patrolling their world is a nightmare. From a copyright holder’s point of view, bringing a new sheriff into town probably seems entirely just and proper. But that’s not entirely fair. But the indisputable fact remains.

The 10 best words the internet has given English My book Netymology: A Linguistic Celebration of the Digital World is about the stories behind new words. I've been an etymology addict since I was a teenager, and especially love unpicking technological words. It's a great reminder of how messily human the stories behind even our sleekest creations are – not to mention delightful curiosities in their own right. 1. This word for our digital incarnations has a marvellously mystical origin, beginning with the Sanskrit term avatara, describing the descent of a god from the heavens into earthly form. Fusing notions of virtual world-building and incarnation, it's the perfect emblem of computers as a portal to a new species of experience. 2. In 1920s America, the # sign served as a shorthand for weight in pounds (and they still call it the pound sign). 3. Computing can be as much combat as collaboration between people and machines, and the Scunthorpe problem is a perfect example. 4. 5. 6. 7. 8. 9. 10.

Rebuilding the Web We Lost We have the obligation to never speak of our concerns without suggesting our solutions. I've been truly gratified to watch the response to The Web We Lost over the last few days; It's become one of the most popular things I've ever written and has inspired great responses. But the most important question we can ask is: How do we rebuild the positive aspects of the web we lost? There are a few starting points, building on conversations we've been having for years. Let's look at the responsibilities we must accept if we're going to return the web to the values that a generation of creators cared about. Take responsibility and accept blame. Overall, there are lots of ways that the current generation of social sites are vulnerable. As is obvious from the responses I've gotten, many, many people care about a social web that honors certain human and creative values.

How We Lost the Web When I wrote about the web we lost a few months ago, I thought the idea that we'd strayed from some of the philosophical and cultural underpinnings of the social web's early days would be of note to a few old-timers like me, and that most folks would sort of shrug their shoulders at this obscure concern. Instead, that piece and the conversation that have followed have gotten more of a response than almost anything else I've written. As a result, I found myself, astonishingly, asked to speak at Harvard's Berkman Center earlier this week about the topic. If you have an hour to spend on the topic and don't mind the sound of my voice for that long, you can actually watch the entire talk, complete with my slides shown inline, here: The Berkman page for the talk also offers downloadable formats for the talk, including a 41MB MP3 if you're the type who listens to podcasts. Some key links if you'd like to further explore the themes in the talk:

How the web lost its way – and its founding principles | Technology In 2009, an American civil rights lawyer created a mashup mapping a neighbourhood called Coal Run, Ohio. It showed which houses were connected to the town's water supply and which houses were occupied by black or white families. A mashup uses data from more than one source, usually publicly available information, and almost always presents it on a map. The results were extraordinary: the map showed that almost all the white households in Coal Run had water piped to their homes, while all but a few black households did not. Those without piped water had to carry water home from the water plant by whatever transport they could muster, pump it from wells contaminated with sulphur and oil from old mining operations or, in extremis, collect rainwater. For more than 50 years, Coal Run's African American residents had called on local authorities to remedy this inequity. "We could articulate the case in words," said civil rights lawyer Reed Colfax who represented the residents.

Everything Is Broken — The Message Then there’s the Intelligence Community, who call themselves the IC. We might like it if they stopped spying on everyone all the time, while they would like us to stop whining about it. After spending some time with them, I am pretty sure I understand why they don’t care about the complaining. The IC are some of the most surveilled humans in history. In all the calls for increased oversight, the basics of human nature gets neglected. There will always be loopholes and as long as loopholes exist or can be constructed or construed, surveillance will be as prevalent as it possibly can be. Yet that’s the lesser problem. When the IC or the DOD or the Executive branch are the only true Americans, and the rest of us are subordinate Americans, or worse the non-people that aren’t associated with America, then we can only become lesser people as time goes on. As our desires conflict with the IC, we become less and less worthy of rights and considerations in the eyes of the IC.