13 Most Beautiful and Famous Trees on Earth 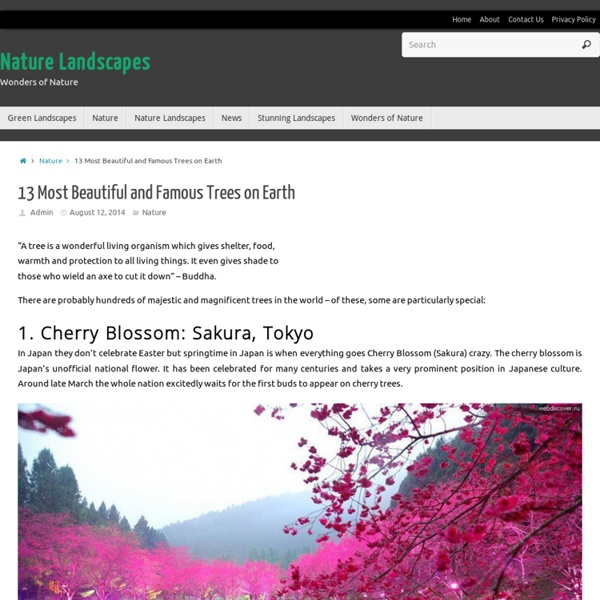 “A tree is a wonderful living organism which gives shelter, food,warmth and protection to all living things. It even gives shade tothose who wield an axe to cut it down” – Buddha. There are probably hundreds of majestic and magnificent trees in the world – of these, some are particularly special: 1. Cherry Blossom: Sakura, Tokyo In Japan they don’t celebrate Easter but springtime in Japan is when everything goes Cherry Blossom (Sakura) crazy. 2. The Angel Oak Tree is a Southern live oak (Quercus virginiana) located in Angel Oak Park on Johns Island near Charleston, South Carolina. 3. Árbol del Tule, a Montezuma Cypress, is located in the town center of Santa María del Tule in the Mexican state of Oaxaca . 4. The Lone Cypress Tree near Monterey is probably the most famous point along the 17-Mile Drive, a scenic road through Pacific Grove and Pebble Beach. 5. General Sherman is a Giant Sequoia located in the Giant Forest of Sequoia National Park in California. 6. 7. 8. 9. 10. 11. 12. 13.

Related:  Amazing Places You Have To See • monde • jaimeernestoromanpiraquive3

United States Captured In 8 Beautiful Photos - Explore King What many people living in the United States of America (U.S.A.) don’t know is that this country is actually a great place to travel around, because it offers tons of stunning scenery. The United States is one of the most visited countries in the world for good reasons. Enjoy these 8 Beautifully captured photos. 9 ULTIMATE BUCKET LIST ROAD TRIPS 9. Grand Canyon, Arizona to Moab, Utah Distance: 1387km (862 miles) Starting at the iconic Grand Canyon, hit six classic national parks on a ten day epic road trip through the best canyons in the Southwest.

The 24 Amazing Pools You Need To Jump In Once In Your Life When is time for travel, we need to think what we will do on that trip and that can be our guide to travel destinations. This is an amazing idea for your travel plans. All of those magnificent pools are something that you need to feel and to see while you are on this planet. Like you can see on photos, all of them have something beautiful that you want to feel on you skin. Most Beautiful Forests in The World Bluebells in Halle`s forest, Belgium. From late April to early May a few acres of woodlands are covered by a splendid carpet of wild bluebell hyacinths. Photo by: Raimund Linke

U.S. National Parks in Photos: From Yosemite to the Grand Canyon The United States has beautiful National Parks. There are 59 protected areas around the country, and some of the most dramatic parks can be found in the Southwest corner of the country. A road trip around Los Angeles from Yosemite to the The Grand Canyon will take you through some of the most remarkable landscapes you’ll ever see. What is so captivating about this area is how varied it is.

The Most Wonderful Castles From Around The World Since childhood castles are explaind as grand places, full of your favorite fairytale characters and their dreaded evil step mothers. No matter where it is or who lives there, castles contain such a majestic air about them. Castles can be romantic, spooky, historical, or downright beautiful, and usually they are all of the above. Amazing Places Preachers Rock, Preikestolen, Norway Blue Caves - Zakynthos Island, Greece Skaftafeli - Iceland Plitvice Lakes – Croatia Crystalline Turquoise Lake, Jiuzhaigou National Park, China 37 Photographic Proofs That Iceland Is A Miracle Of Nature Iceland might be a small and remote nation, but it also happens to be one of the most picturesque as well. Iceland attracts millions of photographers and travellers, all eager to embrace the breathtaking Nordic landscapes with their bodies, souls, and, of course, cameras. The geologically young island is situated at the junction of the North Atlantic and Arctic oceans and the North American and Eurasian continental plates. Its complex geographical history and position has created a unique and contrast-filled Icelandic landscape full of volcanoes, geysers, glaciers and fjords. If you’re not yet convinced that Iceland must be your next destination, here are 37 photographs with astonishing Icelandic scenes to prove that it should be! (via: Bored Panda)

32 Surreal Places On Earth That Belong In A Dream. I’ve Never Wanted To Travel So Badly… During the rainy season, the world’s largest salt flat becomes the world’s largest mirror. The Salar was born when several prehistoric lakes joined into one. The salt flat is so reflective, it’s used to calibrate satellites.