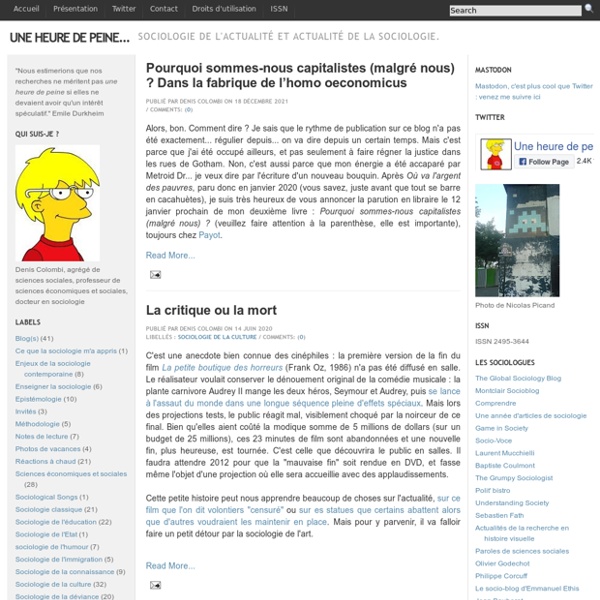 Twitter: It's just a tidal wave of drivel By Janet Street PorterUPDATED: 08:39 GMT, 30 March 2011 A giant step forward for democracy and a victory for common sense? Or further proof that our society rejoices in the trivial? MPs have just decided to allow tweeting — instant internet messaging of up to 140 characters — during Parliamentary debates.

Evidenced-Based Advocacy: (Mis)-Understanding Abortion Regret Evidenced-Based Advocacy is a new bi-monthly column that aims to bridge the gap between the research and activist communities. It will profile provocative new abortion research that activists may not otherwise be able to access. “I Regret My Abortion:” we’ve all seen this infamous anti-choice sign, whether at a rally or outside a clinic. As pro-choice activists, our knee-jerk reaction may be to respond, whether aloud or in our own minds, with a reference to the plethora of research that suggests that relief, not regret, is the most commonly reported feeling after abortion. Yet our knee-jerk reaction may be as stigmatizing as the anti-choice sign itself. When we rely on a relief/regret dichotomy, we leave little room for the complexity inherent in women’s reproductive lives.

ASA Wikipedia Initiative ASA Wikipedia Initiative ASA is calling on its members to support the Association’s mission to deploy the power of Wikipedia to represent the discipline of sociology as fully and as accurately as possible. In addition, we seek to promote the free teaching of sociology worldwide. The broad goals of the ASA Wikipedia Initiative (ASAWI) are: Ensure that articles about sociological research, terminology, and theory are accurate, up-to-date, complete, and written in a style appropriate for the general public, Ensure that articles are based on independent reliable secondary sources To represent scientific controversies from a social science perspective, writing articles in a neutral style Improve and review articles to Good Article and Featured Article quality Assess sociology-related articles and tag them appropriately when there are problems Such work can teach students:

VICE Watch the NYC festival LIVE from June 3-5 on VICELAND and Live Nation TV. Daytime feed streaming daily right here from 4P-9P ET, featuring CHVRCHES, Joey Bada$$, Matt and Kim, and more. Detailed schedule to be announced soon. THE COMPOSITES James Bond, Casino Royal & Moonraker, Ian Fleming “Bond reminds me rather of Hoagy Carmichael, but there is something cold and ruthless” …As he tied his thin, double-ended, black satin tie, he paused for a moment and examined himself levelly in the mirror. His grey-blue eyes looked calmly back with a hint of ironical inquiry and the short lock of black hair which would never stay in place slowly subsided to form a thick comma above his right eyebrow. With the thin vertical scar down his right cheek the general effect was faintly piratical.

rabble.ca rabble.ca is a progressive, left-wing Canadian online magazine. The website's stated intent is to publish "original news stories, in-depth features, provocative interviews, commentaries and more … from some of the few progressive voices in mainstream media".[1] Launched on April 18, 2001, rabble.ca is a not-for-profit organization working under the slogan of "News for the Rest of Us". First started as a news magazine in partnership with the Canadian Centre for Policy Alternatives and the Centre for Social Justice, rabble has expanded beyond the realm of the written word and now includes podcasts as well as branching out to video in 2008 with the creation of rabbletv. rabble.ca also features a discussion board called babble. rabble seeks to create and maintain a community of like-minded people who want to effect change,[2] and who believe their progressive leftist views are excluded from mainstream news sources. History[edit] Contents of the website[edit]

Brian Leiter Most Cited Law Professors by Specialty, 2000-2007 November 12, 2007 Corrected December 18, 2007 These listings are drawn from the same data we collected in July 2007 about citations to faculty since the year 2000 that were incorporated into the Ranking of Law Schools by Scholarly Impact released on September 1, 2007. In several cases (Bartlett, Bibas, and Horwitz) we attempted to correct for the fact that these scholars are frequently cited with different spellings of their names (that had not been corrected for in the Scholarly Impact study, but also would not have affected the overall results). Matthew Herbert's One Pig Reviewed: Experimental Album Made from a Pig Photograph by Digital Vision. When Matthew Herbert set out to make his new album, he did as few electronic-music auteurs do and made off for a farm. It was a remote place he had come to know in the southeast of England, in the county of Kent, and it was home to a subject deemed worthy of a project he had in mind. Or at least it would be.

Sometimes we should be spoil sports: The need for public protest. Earlier this week, Trenton Oldfield was convicted of ‘Causing a Public Nuisance’ by a jury at the Isleworth Crown Court. Previous instances of this rarely prosecuted offence include impregnating the air with “noisome and offensive stinks and smells” causing “a nuisance to all the King’s liege subjects living in Twickenham” But Oldfield was the man who had the temerity to disrupt the Oxford and Cambridge Boat Race last April, by choosing to take a swim, just as both boats were getting into their stride. The prosecutor explained to the court that his actions had “spoiled the race for hundreds of thousands of spectators” and for this, the judge has adjourned sentence,commenting that she is not ruling out a prison sentence. Similarly the thrill of horseracing was spoiled for many spectators when a suffragette threw herself under the King’s Horse and was trampled to death, but surely the spoiling of their fun was nothing compared to the denegration of women in that pre-vote era. Like this:

Shut up and Write! A couple of months ago a friend told me about the ‘Shut up and Write’ movement in San Francisco. The idea is quite simple; a group of writers converge on a location, presumably one with good coffee. After 15 minutes of chit chat they, well – just shut up and write. The Edelweiss Pirates: A Story of Freedom, Love and Life « The International Raoul Wallenberg Foundation In the years before World War II, the members of the Nazi regime became intent on cultivating a sense of loyalty and entitlement in the German youth. It would be too late, they thought, to wait for adulthood; the Nazi mentality must be inscribed on children if it was to take hold and grow to support the cause. With such an intention, the Hitler Youth was born. Though available to girls and boys (girls could join the Bund Deutsche Madel), the Hitler Youth was primarily interested in procuring control of Germany’s young males. Boys between the ages of 10 and 14 joined the Deutsches Jungvolk (German Young People) and those between 14 and 18 joined the Hitler Jugend, or Hitler Youth. At its peak, membership in the group totaled about 90 percent of the country’s eligible youth and was the world’s largest youth organization.

Constitution Picture: National Archives and Records Administration (PD) It’s now painfully clear that the president has put out a contract on the Fourth Amendment. And at the Capitol, the hierarchies of both parties are stuffing it into the trunks of their limousines, so each provision can be neatly fitted with cement shoes and delivered to the bottom of the Potomac. Some other Americans are on a rescue mission. One of them, Congressman Justin Amash, began a debate on the House floor Wednesday with a vow to “defend the Fourth Amendment.” That’s really what his amendment — requiring that surveillance be warranted — was all about.

Anthropology, Teaching, Empathy Professor Michael Wesch’s reflections on Why Good Classes Fail received follow-ups and well-deserved attention. Unfortunately in some of the wider follow-ups–such as the piece in the Chronicle of Higher Education, the idea of empathy as a key component seemed to drop out. Empathy is crucial, not just for teaching, but for anthropological inquiry.