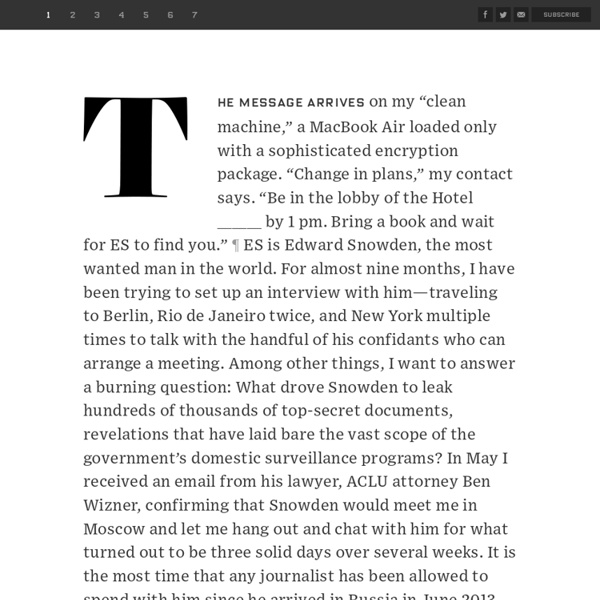 The afternoon of our third meeting, about two weeks after our first, Snowden comes to my hotel room. I have changed locations and am now staying at the Hotel National, across the street from the Kremlin and Red Square. An icon like the Metropol, much of Russia’s history passed through its front doors at one time or another. Lenin once lived in Room 107, and the ghost of Felix Dzerzhinsky, the feared chief of the old Soviet secret police who also lived here, still haunts the hallways. But rather than the Russian secret police, it’s his old employers, the CIA and the NSA, that Snowden most fears. More than anything, Snowden fears a blunder that will destroy all the progress toward reforms for which he has sacrificed so much. Indeed, some of his fellow travelers have already committed some egregious mistakes. Nor is he optimistic that the next election will bring any meaningful reform. Until then, Snowden says, the revelations will keep coming. Related:  MULTIMEDIAS _ INTERACTIF ET LONGFORMAT HYBRIDE • Whistleblowers and Democracy

Ed Snowden Taught Me To Smuggle Secrets Past Incredible Danger. Now I Teach You. Late on the evening of January 11, 2013, someone sent me an interesting email. It was encrypted, and sent from the sort of anonymous email service that smart people use when they want to hide their identity. Sitting at the kitchen table in the small cottage where I lived in Berkeley with my wife and two cats, I decrypted it. The anonymous emailer wanted to know if I could help him communicate securely with Laura Poitras, the documentary filmmaker who had repeatedly cast a critical eye on American foreign policy. From: anon108@■■■■■■■■■ To: Micah Lee Date: Fri, 11 Jan 2013Micah,I’m a friend. I need to get information securely to Laura Poitras and her alone, but I can’t find an email/gpg key for her.Can you help? I didn’t know it at the time, but I had just been contacted by Edward Snowden, the National Security Agency contractor who was then preparing a momentous leak of government data. That was me. From: Laura Poitras To: Micah Lee Date: Sat, 12 Jan 2013Hey Micah,Thanks for asking.

Does this photo tell us what Edward Snowden stands for? No matter your political stance, the image is eye-grabbing: famed whistleblower Edward Snowden stares into the distance as he clutches an American flag to his chest, as though protecting the thing he holds most sacred. That's the picture gracing the current cover of Wired magazine and it's causing quite a stir among supporters and opponents alike of the man who pulled back the curtain on rampant NSA spying programs by fleeing the country and leaking classified documents to journalists just over a year ago. The photo was taken by world-famous photographer Platon Antoniou, whose portraits include such notable figures as Vladamir Putin and Barack Obama, and accompanies a lengthy profile of Mr. Snowden by James Bamford. In a story detailing the context of the photo shoot, Wired editor in chief Scott Dadich writes that while he and the photo staff waited nervously in their hotel room before meeting Mr. During the photo shoot in Moscow, where Snowden currently resides in exile, Mr.

The shirt on your back: the human cost of the Bangladeshi garment industry | World Sponsored by: How did the clothes you're wearing get to you? We trace the human cost of the Bangladeshi garment industry in video, words and pictures WARNING: contains images some viewers may find distressing I, spy: Edward Snowden in exile Fiction and films, the nearest most of us knowingly get to the world of espionage, give us a series of reliable stereotypes. British spies are hard-bitten, libidinous he-men. Russian agents are thickset, low-browed and facially scarred. But the Edward Snowden who materialises in our hotel room shortly after noon on the appointed day seems none of those things. Oliver Stone, who is working on a film about the man now standing in room 615 of the Golden Apple hotel on Moscow’s Malaya Dmitrovka, might struggle to make his subject live up to the canon of great movie spies. Since arriving in Moscow, Snowden has been keeping late and solitary hours – effectively living on US time, tapping away on one of his three computers (three to be safe; he uses encrypted chat, too). When the Guardian first spoke to Snowden a year ago in Hong Kong, he had been dishevelled, his hair uncombed, wearing jeans and a T-shirt. Loaded: 0% Progress: 0% He is guarded on the subject of his life in exile.

12 Companies That Will Conquer The Drone Market In 2014 and 2015 1. The Boeing Company (NYSE:BA) Boeing has had a hand in the drone market for a number of years, mostly developing for the U.S. military. The company, led by W. 2. The San-Diego based company is credited with building the Predator drone, the much-feared aircraft that saw action way back during the Balkans war, where the Americans lost two. 3. Like Boeing, Lockheed is testing a drone -- the Stalker -- that can stay in the air for days at a time. 4. Founded only in 1994, Northrop has quickly risen to become one of the top suppliers of military hardware in the world. 5. AeroVironment is the company responsible for the “Hummingbird drone” ordered by the Pentagon. 6. The Norway-based company is really only famous for one product, but what a product it has become. 7. The company brought in $2.87 billion in revenue in 2012, up 3 percent from last year. 9. 10. Appetite for military drones has pushed the company’s revenues toward nearly $13 billion. 11.

After the Storm Text of the letter to Edward Snowden Here is the text of the open letter Lon Snowden, along with his attorney, Bruce Fein, wrote to NSA leaker Edward Snowden. The letter was provided to The Associated Press. July 2, 2013 Edward Joseph Snowden Moscow Dear Edward: I, Bruce Fein, am writing this letter in collaboration with your father in response to the Statement you issued yesterday in Moscow. Thomas Paine, the voice of the American Revolution, trumpeted that a patriot saves his country from his government. What you have done and are doing has awakened congressional oversight of the intelligence community from deep slumber; and, has already provoked the introduction of remedial legislation in Congress to curtail spying abuses under section 215 of the Patriot Act and section 702 of the Foreign Intelligence Surveillance Act. In contrast to your actions, Director of National Intelligence James Clapper responded last March as follows to an unambiguous question raised by Senator Ron Wyden: Very truly yours, Bruce Fein Lon Snowden

How AlJazeera plans its interactive storytelling projects AlJazeera has built several long-form storytelling projects that have infused investigative journalism with digital technology and allowed users to experience stories in engaging ways. See The War Across the River about refugees from the Central African Republic, or Freedom Denied, an interactive exploration of what happens to some Palestinians after they’re arrested by the Israeli military. Palestine Remix, one of the largest interactives produced by AlJazeera, allows users to create their own narrative by re-editing footage from 17 different films about Palestine. Credit: AlJazeera. How does AlJazeera plan and design these interactive storytelling projects? The story is the foundation. The story is the foundation to interactive storytelling. Setting up your story is just as important as its movement and climax Antonopoulos makes sure every story has a universal idea from which everything sprouts. The climax is the moment the universal idea makes sense to the reader says Antonopoulos.

U.S. charges Snowden with espionage U.S. defense contractor Edward Snowden discusses his motivation behind the NSA leak and why he revealed himself as the whistleblower behind the major story. Courtesy of Laura Poitras and Glenn Greenwald. (Courtesy of Laura Poitras and Glenn Greenwald) Federal prosecutors have filed a criminal complaint against Edward Snowden, the former National Security Agency contractor who leaked a trove of documents about top-secret surveillance programs, and the United States has asked Hong Kong to detain him on a provisional arrest warrant, according to U.S. officials. Snowden was charged with theft, “unauthorized communication of national defense information” and “willful communication of classified communications intelligence information to an unauthorized person,” according to the complaint. A Justice Department spokeswoman declined to comment. Snowden subsequently disappeared from public view; it is thought that he is still in the Chinese territory.

Now is the time Our nation has suffered too much at the hands of dangerous people who use guns to commit horrific acts of violence. As President Obama said following the Sandy Hook Elementary School tragedy, “We won’t be able to stop every violent act, but if there is even one thing that we can do to prevent any of these events, we have a deep obligation, all of us, to try.” Most gun owners are responsible and law-abiding, and they use their guns safely. The President strongly believes that the Second Amendment guarantees an individual right to bear arms. While no law or set of laws will end gun violence, it is clear that the American people want action. Why Now Gunfire was probably the last thing U.S. play President Obama speaks at a memorial service for in Tucson, Arizona. Four days later, President Obama spoke at a memorial service for the Tucson shooting victims, urging Americans to engage in a national conversation about the causes of this type of tragedy. Working Together Share on Twitter

New leaker disclosing US secrets, government concludes Your video will begin momentarily. FIRST ON CNN: New documents formed the basis of story on news site, InterceptThe site is run by Glenn Greenwald, who published leaks by Edward Snowden Article focuses on the growth of names on terror databases during the Obama administration (CNN) -- The federal government has concluded there's a new leaker exposing national security documents in the aftermath of surveillance disclosures by former NSA contractor Edward Snowden, U.S. officials tell CNN. Proof of the newest leak comes from national security documents that formed the basis of a news story published Tuesday by the Intercept, the news site launched by Glenn Greenwald, who also published Snowden's leaks. NSA leaker Edward Snowden asks to extend Russia asylum One year of Edward Snowden's revelations Snowden: 'I was trained as a spy' Jonathan Pollard is a divisive figure in U.S. Military analyst Daniel Ellsberg leaked the 7,000-page Pentagon Papers in 1971. Army Pvt. Big databases A year after Snowden

Firestorm: The story of the bushfire at Dunalley | World news Turn autoplay off Turn autoplay on Please activate cookies in order to turn autoplay off Edition: About us Today's paper Subscribe Firestorm: The story of the bushfire at Dunalley The Guardian, Send to a friend Your IP address will be logged Share Short link for this page: Contact us Report errors or inaccuracies: reader@theguardian.com Letters for publication should be sent to: guardian.letters@theguardian.com Firestorm The photograph of the Holmes family hiding from a violent bushfire in Tasmania was shared around the world. Enter © 2016 Guardian News and Media Limited or its affiliated companies.