America Is Not For Black People 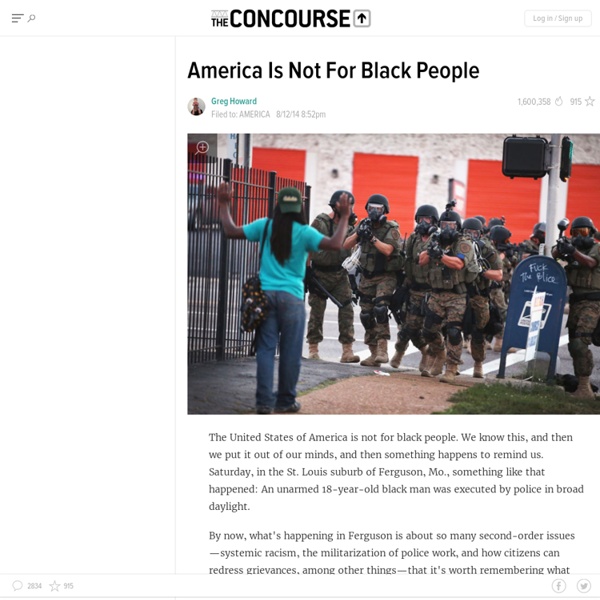 Trending on Related Blogs Robin Williams' Daughter Pens Heartbreaking Goodbye to Her Father 7k people reading on Gawker America Is Not For Black People 1.7k people reading on The Concourse Robin Williams Once Bought Conan O'Brien a Bicycle to Cheer Him Up 1.2k people reading on Gawker Recommended by Greg Howard America Is Not For Black People Asshole Gorilla Humps Robin Williams' Corpse for Publicity In The O'Bannon Decision, Truth Wins Out Over Rhetoric We Have a Rape Gif Problem and Gawker Media Won't Do Anything About It Hot Mic Catches Jon Jones And Daniel Cormier Talking Incredible Shit Don't Buy All The Pies At Burger King To Spite A Child, You Asshole It's Over Before It Started: What You Need To Know About France Ligue… ESPN Suspends Dan Le Batard Two Days For Trolling LeBron With… NCAA Gives More Power To Power Five Conferences Here's a really cool graphic that links to GIFs of 135 (of now 137)... Landon Donovan Was Our Savior All Along How Dan Snyder Bought Off The D.C. Related:  Stuff

Which Picture Would They Use? #IfTheyGunnedMeDown I wrote on twitter yesterday about how, after I looked through this tag, it occurred to me that of the hundreds of photos of me doing a keg stand or giving the finger or showing off my tongue ring or wearing something decidedly unconservative or generally goofing off, the media would still choose my graduation photo or me holding my baby cousins or acting in a play or giving a speech or wearing the cute pink dress in my head shot I use for commercial gigs. It made me so mad. I am a party girl and I do get up to shit and I am a college grad and I do love my family. I am all of that and much more, like everyone is, but in the eyes of the media, I would just be a poor little white girl with a bright smile and a big future.

With Highway Patrol, hugs and kisses replace tear gas in Ferguson Thousands of demonstrators peacefully march with members of the St. Louis County Police and Missouri Highway Patrol on Thursday, Aug. 14, in Ferguson, Mo. (Jeff Roberson/AP) FERGUSON, Mo. — Suddenly, everything has changed. The heavy riot armor, the SWAT trucks with sniper posts, the hostile glares: tonight in Ferguson they were gone. A stunning change in tone radiated through the suburban streets where protests had turned violent each of the last four evenings following the police shooting of 18-year-old Michael Brown. But Thursday night, when more than a thousand protesters descended on the remains of QuickTrip – which was burned during riots on Sunday – they had a new leader. The man at the front of the march, was Missouri Highway Patrol Capt. “I’m not afraid to be in this crowd,” Johnson declared to reporters. Missouri Gov. [ RELATED: Federal, state officials take sweeping steps in response to Ferguson, Mo., unrest ] One man stopped, telling Capt. They met head on. “OK!

m.colorlines.com/archives/2014/08/artists_on_ferguson.html 8 Facts That Show Us Elephants Are People, Too Okay, fine -- elephants aren't people. But they're like people in a lot of ways, and on World Elephant Day, that counts for something. And yet around 35,000 of these pachyderms were killed in 2013 alone, and there's a continuing demand for their valuable ivory tusks. If we aren't careful, most of these creatures could be extinct by 2020, according to some conservationists. It's a tragedy for any animal to face extinction, but it would seem like a special tragedy to lose this one. Our very history is entwined, with elephants and humans evolving in parallel hundreds of thousands of years ago. 1. In a 2006 study of three Asian elephants, Emory University researchers placed a mirror in the enclosure of three female Asian elephants. The fact that Happy passed that test, the researchers said, indicates the capacity of elephants to recognize themselves as individuals rather than just part of a pack. Another test showed that elephants understand pointing, using, of course, their trunks. 2. 3.

50 Books Every Black Teen Should Read At NewsOne, we believe that the child who reads is the child who leads. In keeping with that idea, we decided this summer to take a look at the state of reading for black youth. Research has found that the proportion of young people who are daily readers drops has dropped dramatically in recent years. According to some studies, since 1984, the percentage of 13-year-olds who are weekly readers dropped from 70% to 53%. Even worse, the percentage of 17-year-olds who are weekly readers fell from 64% to a startling 40%. We tapped our brother and sister sites: Hello Beautiful and The Urban Daily to get the staff’s summer reading recommendations.

The Last Stand for the Middle Class Is Taking Place in a Parking Lot in Massachusetts Americans have grown to accept that corporations will invariably take advantage of their low wage workers, and executives have done nothing recently to pretend like this isn't the case. When asked if his multinational beast would fight a federal hike in employee compensation, Walmart U.S. President Bill Simon told reporters in May, “We are not opposed to a minimum wage increase, unless it's directed exclusively at us.” Compassionate stuff. It's a dangerously low bar set by the nation's largest retailer — don't expect your bosses to support an acceptable living wage for workers, let alone bonuses or a 401k, or even respect. That's why, for those viewing from afar, the story of Market Basket — a Massachusetts company currently in the throes of a corporate overhaul — must seem completely unbelievable. Here's the most unusual part: Protesting employees are demanding the return of their beloved CEO, ousted by a board focused solely on the bottom line. The Backstory The Characters The Climate

What Do We Teach When Kids Are Dying? #MichaelBrown [After the trial where the man who killed Jordan Davis was not found guilty of his murder, a group of amazing educators and education activists (I was lucky to be one of the folks involved) came together to create a teaching guide for talking about Jordan Davis' killing and the trial that followed. Many of the resources -- and equally as important, the frameworks for thinking about creating curriculum -- are equally applicable for creating conversations and curriculum around talking about Mike Brown. And we need to talk about Mike Brown.] When I heard that Mike Brown was shot – unarmed, multiple times – by a police officer, my thoughts immediately went to the many stories I have heard over the years from my students of color about their experiences with the police. And the reaction of the authorities in Ferguson, MO since Mike Brown was shot by a police officer despite being unarmed has looked more like a police state than anything I can remember in America in my lifetime. Like this:

Is Vermont the solution to the border crisis? In its efforts to figure out what to do with the many Central American unaccompanied minors coming to the United States -- about 60,000 in recent weeks -- the White House has been asking several states if they have the resources to house some of these children. The office of Vermont's Democratic Gov. Pete Shumlin (D) told a local newspaper, "We've let HHS know that we are willing to investigate locations and logistical requirements and work with them to determine if Vermont would be an appropriate host state." An apple orchard of the Vermont Hard Cider Company is seen in Middlebury, Vermont in this undated picture provided by the Vermont Hard Cider Company. REUTERS/Vermont Hard Cider Company/Handout via Reuter It's perhaps unsurprising that the state would be willing to help. The fact that their constituency back in Vermont is a big part of that support is less well known; about 1,500 undocumented immigrants live in Vermont, many working on dairy farms.

These 4 Sisters Were Photographed Every Year For 36 Years The year was 1975 when world-renowned Nicolas Nixon, a professor of photography at the Massachusetts College of Art originally photographed his wife Bebe and her 3 sisters. They were so impressed with the result, they collectively decided to make it a yearly event, the annual family photo. 36 years later, the sisters and Nicolas had all kept their promise, resulting in 36 beautiful and candid photographs. Despite the years changing, the four sisters Heather, Mimi, Bebe and Laurie always remained in their same positions from that original photograph back in 1975. Whilst the fashion, haircuts and indeed their lives & personalities continue to evolve and change over the years, one thing that is incredibly evident is just how much of a loving bond there is between the four of them. You can find them in the archives of New York’s Museum of Modern art and on display at the wonderful Fraenkel Gallery in San Francisco. Via: Fraenkel Gallery

40 Of The Most Powerful Social Issue Ads That’ll Make You Stop And Think Many people complain about glossy advertisements and TV commercials as an obnoxious way for companies to invade our everyday lives and ram their products down our throats, but that’s not all that printed ads are good for. The best commercials on this list are excellent examples of effective advertising strategies for social issues marketing campaigns that let their voices be heard. A well-made advertisement is designed to grab your attention and to remain in your memory long after you’ve left it behind, and that is precisely what many of these social problems need. Getting people to think and worry about various social and environmental issues such as human trafficking, racism, and air pollution is significant for raising public supporting and affecting meaningful changes. A few of these ads are, in fact, commercial ads, but it’s still nice that they champion socially or environmentally aware causes/products.Just like with commercial advertisements, having just the facts is not enough.