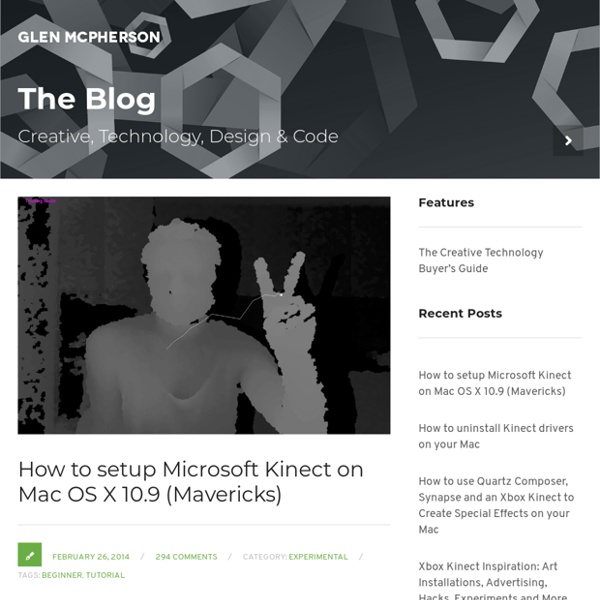 If you want to get the Microsoft Kinect setup and working on your Mac using OS X 10.9 Mavericks, then you’ve come to the right place. Since posting the first tutorial, a number of new software updates have been released, so it’s a good idea to recap from the start. This tutorial will detail all the steps necessary to get the Kinect working in Mavericks, so buckle up and let’s get this party started. As always, if you have any questions, issues, or feedback, please feel free to post them in the comments section at the bottom, and to keep abreast of any new updates and posts you can follow me on Twitter, or subscribe using the new email form in the sidebar. Oh, and if you don’t own a Kinect yet, there’s a few things you’ll need to know, so please check out the buyers guide or If you followed my earlier tutorial and/or had your Kinect running in Mac OS X 10.8 Mountain Lion, then you’ll want to complete this step before moving ahead. When it comes to hacking the Kinect, cleaner is better.

kinect_ProjectorDance This is a lightweightkinect-projector calibration method – which iseasy to usefast to setupfun to play with ;) It’s hacked for processing and works without openCV. I created this tool because i needed an interactive wall for another project. The alignment between a camera and a projector is normally done by a homographic transformationm which is a standard functionality of the OpenCV library. Setting up Kinect on Mac — black label creative Update 27/04/2013: Latest test of the OpenNI 2.1.0 beta and NITE2 was good but it’s not working with the SimpleOpenNI library yet. I’ll keep watching for updates and let you know when it’s all running. Thanks to open source projects like OpenNI and OpenKinect, you can now use Microsoft’s Kinect on more than just Windows. This guide is for those running OSX 10.6.8 or newer but might also be applicable to anyone still running older versions or Linux. Some changes to the command line code might be needed though – if you get it going, let me know in the comments. The main parts involved here are OpenNI, SensorKinect, NITE.

4. Gestural Interfaces for Making Music - Kinect Hacks [Book] Fancy yourself a bit of a music aficionado? Always keeping up to date on the latest sounds and advancements in music creation and engineering? If that’s the case, then this chapter will be right up your alley. The Kinect’s genius shines when integrating a natural user interface into just about every component of our lives. How to use Quartz Composer, Synapse & Xbox Kinect on your Mac If you’re looking to kickstart your Kinect programming and create some magic on the Mac, then this is the place to be. In this tutorial we use Synapse, Quartz Composer and the Kinect sensor to create a cool motion-activated particle effect that lets you move an animation around your screen using only your hands. Please note, this tutorial has been completed using Mac OS X 10.8 (Mountain Lion). It is also important to note that your Xbox Kinect should be model #1414. If you have the newer model #1474, then you may need to complete this extra step to get your Kinect working.

Synapse for Kinect SYNAPSE for Kinect Update: There’s some newer Kinect hardware out there, “Kinect for Windows”. This hardware is slightly different, and doesn’t work with Synapse. Be careful when purchasing, Synapse only supports “Kinect for Xbox”. Visio : le Mobile projector puissant, mobile et analogique Once the lens is mounted, you need to make your projection the most visible. For this, the light of the projection should be more important than ambient light. Only on this condition will your projections be completely visible. Use Kinect with Mac OSX In this article I will show how you can use Microsoft Kinect for xBox 360 on Mac OSX. In this way you can create applications that interact with the body's movements. Introduction

Kinect Kinect (codenamed in development as Project Natal) is a line of motion sensing input devices by Microsoft for Xbox 360 and Xbox One video game consoles and Windows PCs. Based around a webcam-style add-on peripheral, it enables users to control and interact with their console/computer without the need for a game controller, through a natural user interface using gestures and spoken commands.[9] The first-generation Kinect was first introduced in November 2010 in an attempt to broaden Xbox 360's audience beyond its typical gamer base.[10] A version for Windows was released on February 1, 2012.[6] Kinect competes with several motion controllers on other home consoles, such as Wii Remote Plus for Wii, PlayStation Move/PlayStation Eye for PlayStation 3, and PlayStation Camera for PlayStation 4. Technology

Depth Sensor Shootout (Updated Dec 23 2016) Stimulant’s mission is to create “smart spaces” which engage visitors in ways that can’t be duplicated with devices they have in their home or their pocket. We achieve this through a variety of sensors and cameras feeding data into custom software, running on bespoke computing hardware, and outputting to any number of display or projection devices. Because it all begins with the sensing technologies, we spend plenty of time evaluating various products that help us determine how people move through a space. Depth-sensing cameras are a great way to do that, and here we present a comparison of the cameras we’ve been able to get into our lab.