The Anzac landing at Gallipoli 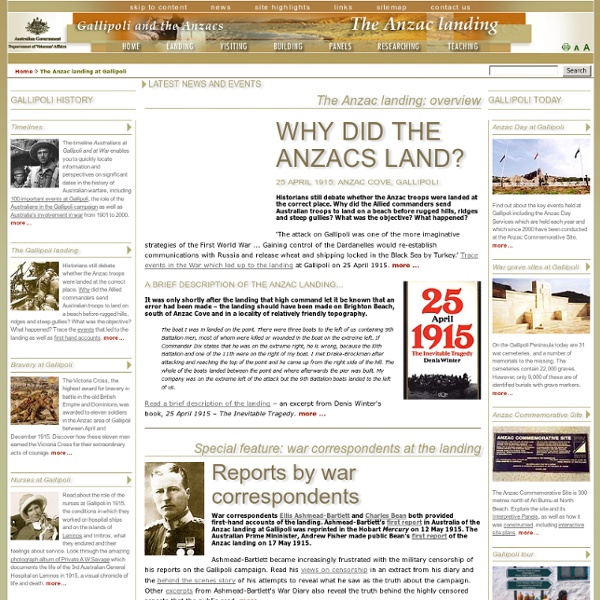 The Anzac landing: overview Why did theAnzacs land? 25 April 1915: Anzac Cove, Gallipoli Historians still debate whether the Anzac troops were landed at the correct place. Why did the Allied commanders send Australian troops to land on a beach before rugged hills, ridges and steep gullies? What was the objective? ‘The attack on Gallipoli was one of the more imaginative strategies of the First World War ... A brief description of the Anzac Landing... It was only shortly after the landing that high command let it be known that an error had been made – the landing should have been made on Brighton Beach, south of Anzac Cove and in a locality of relatively friendly topography. The boat I was in landed on the point. Read a brief description of the landing – an excerpt from Denis Winter's book, 25 April 1915 – The Inevitable Tragedy. more ... Special feature: war correspondents at the landing Reports by war correspondents Landing section highlights ‘First to Fall’ A 'duty clear before us'

In the trenches of 1914-1918 What were the trenches? Although most of us think primarily of the Great War in terms of life and death in the trenches, only a relatively small proportion of the army actually served there. The trenches were the front lines, the most dangerous places. But behind them was a mass of supply lines, training establishments, stores, workshops, headquarters and all the other elements of the 1914-1918 system of war, in which the majority of troops were employed. The trenches were the domain of the infantry, with the supporting arms of the mortars and machine-guns, the engineers and the forward positions of the artillery observers.

First World War Origins The First World War was caused by the destabilisation of the balance of power in Europe due to the rise of Germany. The war began in 1914 when Austria-Hungary invaded Serbia because of the assassination of an archduke. Stretcher Bearers Advancing troops were not allowed to stop and care for wounded soldiers. All men carried an emergency field-dressing and if possible attempted to treat their own wounds. The wounded soldier then had to wait until the stretcher-bearers arrived. There were only four stretcher-bearers per company and so it was often sometime before they received medical help. Some dragged themselves into a shell-hole for protection, but this was dangerous as many sank into the mud and drowned. One man with a broken thigh spent two days dragging himself backwards with his hands, until he reached his own trenches.

The Gallipoli campaign - The Gallipoli campaign Each year on Anzac Day, New Zealanders (and Australians) mark the anniversary of the Gallipoli landings of 25 April 1915. On that day, thousands of young men, far from their homes, stormed the beaches on the Gallipoli Peninsula in what is now Turkey. For eight long months, New Zealand troops, alongside those from Australia, Great Britain and Ireland, France, India, and Newfoundland battled harsh conditions and Ottoman forces desperately fighting to protect their homeland. By the time the campaign ended, more than 130,000 men had died: at least 87,000 Ottoman soldiers and 44,000 Allied soldiers, including more than 8700 Australians. Among the dead were 2779 New Zealanders, about a fifth of all those who had landed on the peninsula. In the wider story of the First World War, the Gallipoli campaign made no large mark.

Pigeon post Pigeons with messages attached. Pigeon post is the use of homing pigeons to carry messages. Pigeons were effective as messengers due to their natural homing abilities. The pigeons were transported to a destination in cages, where they would be attached with messages, then naturally the pigeon would fly back to its home where the owner could read his mail. They have been used in many places around the world. Anzac Day Collection - Collection This documentary gave NZ viewers, for the first time, a Turkish view of the Gallipoli story. Produced for TVNZ and Turkish TV, it focuses on four young people, two Turks and two New Zealanders, descended from Gallipoli veterans, as they explore the grim reality of their ancestors’ experience. Six Māori Battalion soldiers camped in Italian ruins wait for night to fall. In the silence the bros-in-arms distract themselves with jokes before a tohu (sign) brings them back to reality. Directed by Oscar-nominated Taika Waititi it won international acclaim: honourable mention at Sundance and a special jury prize at Berlin. The story of the New Zealand Army's (28th) Māori Battalion, this Tainui Stephens documentary tells the stories of five men who served with the unit.

How many New Zealanders served on Gallipoli? As the centenary of the First World War approaches, people are interested in how many Kiwis served in the various campaigns. For Gallipoli, the answer is not straightforward – and the waters have been muddied by a mistake by a senior British general that went unnoticed for nearly a century. Sir Ian Hamilton was a respected military thinker but not a great success as head of the Mediterranean Expeditionary Force (MEF), the cobbled-together Allied army which began landing on Turkey’s Gallipoli Peninsula on 25 April 1915. I’ve recently realised that Hamilton was also responsible for a significant underestimate of the number of men who served on Gallipoli in New Zealand units of the MEF. Sir Ian Standish Monteith Hamilton. Library of Congress, LC-DIG-ggbain-18025.

World War One: The many battles faced by WW1's nurses Nursing in World War One was exhausting, often dangerous work and the women who volunteered experienced the horror of war firsthand, some paying the ultimate price. But their story is surrounded by myth and their full contribution often goes unrecognised, writes Shirley Williams. In his much-admired book published in 1975, The Great War and Modern Memory, the American literary critic and historian, Paul Fussell, wrote about the pervasive myths and legends of WW1, so powerful they became indistinguishable from fact in many minds. Surprisingly, Fussell hardly mentioned nurses. There is no reference to Edith Cavell, let alone Florence Nightingale.