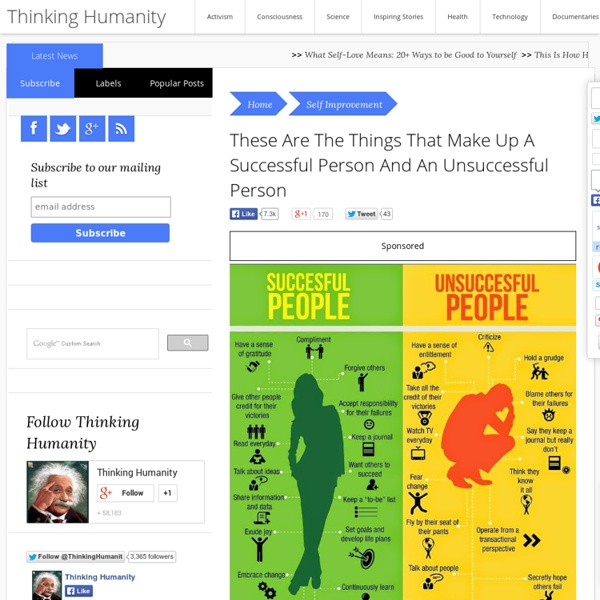 7 Qualities of Uber-Productive People Some people get more done than others--a lot more. Sure, they work hard. And they work smart. But they possess other qualities that make a major impact on their performance. 18 Things Highly Creative People Do Differently This list has been expanded into the new book, “Wired to Create: Unravelling the Mysteries of the Creative Mind,” by Carolyn Gregoire and Scott Barry Kaufman. Creativity works in mysterious and often paradoxical ways. Creative thinking is a stable, defining characteristic in some personalities, but it may also change based on situation and context.

Motivation and the Power of Not Giving Up Listen Have you ever set a goal for yourself, like getting fit, making honor roll, or being picked for a team? Like lots of people, maybe you started out doing great, but then lost some of that drive and had trouble getting motivated again. You're Not Alone! Everyone struggles with staying motivated and reaching their goals. Start Every Day as a Producer, Not a Consumer I have to agree that my most productive days are those where I don't allow myself to read the news, check e-mail, facebook, etc., right after I get up. However, that happens because I've got a ton of stuff to get done, and the outside world takes a back seat until my workload is under control. However, there are certain biological necessities that have to happen before I can be productive. The dog gets let out, I go to the bathroom, I eat/drink something, and *then* I sit down to be productive.

Enjoying the process of Learning Details Created on Monday, 23 January 2012 18:38 Written by Karen Green Karen Green, from Lyons Hall Primary School in Essex, England, shares her experience, tips and classroom activities to teach the growth mindset I’m a primary school teacher at Lyons Hall Primary School, where I teach sixth grade students. We had introduced the growth mindset in school, so students were already familiar with the language of it. How To be so Productive You Can't Stand it You might think that creatives as diverse as Internet entrepreneur Jack Dorsey, industrial design firm Studio 7.5, and bestselling Japanese novelist Haruki Murakami would have little in common. In fact, the tenets that guide how they – and exceptionally productive creatives across the board – make ideas happen are incredibly similar. Here are 10 laws of productivity we’ve consistently observed among serial idea executors:

about Hey there. My name is Maria Popova and I’m a reader, writer, interestingness hunter-gatherer, and curious mind at large. I’ve previously written for Wired UK, The Atlantic, The New York Times, and Harvard’s Nieman Journalism Lab, among others, and am an MIT Futures of Entertainment Fellow. Maria Popova. How to Make Good Decisions ... Faster Take a look at this paragraph: Cna yuo raed tihs? I cdn'uolt blveiee taht I cluod aulaclty uesdnatnrd waht I was rdanieg. The phaonemnel pweor of the hmuan mnid, aoccdrnig to a rsereeachr at Cmabrigde Uinervtisy, it dseno't mtaetr in waht oerdr the ltteres in a wrod are, the olny iproamtnt tihng is taht the frsit and lsat ltteers be in the rghit pclae. Tihs is bcuseae the huamn mnid deos not raed ervey lteter by istlef, but the wrod as a wlohe. Azanmig, huh?

10 Most Common Rookie Mistakes in Public Speaking Don't make these rookie mistakes—learn how to give great presentations and become a better presenter. In this guest post, Terry Gault, Managing Partner and Vice President of The Henderson Group, provides insight into how to become a better presenter by avoiding a few common mistakes. Terry oversees all curriculum and services at The Henderson Group. In addition he is responsible for the selection, training and development of all trainers and facilitators for The Henderson Group, and has been an instructor with the Henderson Group for over 15 years. Having coached clients on presentation skills since 1997, I’ve noticed some clear patterns in the behavior of inexperienced presenters. Take a look at the prezi we've made to illustrate these 10 mistakes, and the easy ways that you can avoid them.

How To Be Motivated: 4 New Insights From Research Sometimes there is not enough coffee in universe to get you going. How to be motivated is something we all struggle with at some time or another. Or, um, daily.