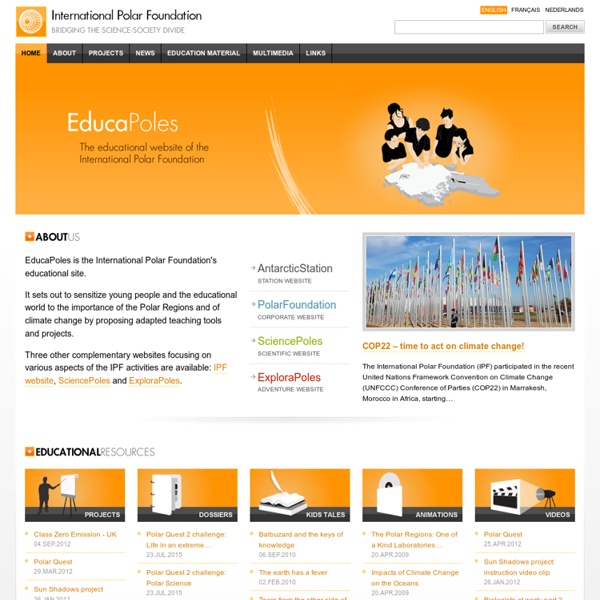 Climate Change Interactive First Mammal Species Goes Extinct Due to Climate Change The humble Bramble Cay melomys has disappeared from its island in the Great Barrier Reef. Climate Change Making Calendars Run Amok People in Central Asia are recalibrating their system of time to adapt to a changing ecosystem. The Great Energy Challenge The National Geographic initiative is a call to action to become actively involved, to learn more and do more—to change how we think about and consume energy so that we can all help tackle the big energy questions. U.S.'s First Official Climate Refugees Race Against Time A Native American tribe struggles to hold on to their culture while their land slips into the Gulf of Mexico. The Arctic Is Melting.

TckTckTck WWF What is climate change? Global warming – doesn’t mean we’ll all just have warmer weather in future. As the planet heats, climate patterns change. It’ll mean more extreme and unpredictable weather across the world – many places will be hotter, some wetter, others drier. We know the planet has warmed by an average of nearly 1°C in the past century. What causes climate change? Burning fossil fuels Over the past 150 years, the world’s industrialised nations have changed the balance of the carbon cycle by burning huge amounts of fossil fuels (concentrated carbon such as coal, oil and gas) Breeding cattle and cutting down forests Industrialised nations have also breeding vast numbers of methane-producing livestock and cutting down the forests that naturally absorb carbon dioxide from the air. Trapped carbon dioxide The extra carbon dioxide in the atmosphere traps more of the sun’s heat, so it’s been raising global temperatures. Find out about the effects of climate change. How hot can it get?

Global Warming Map Global Issues Energy and Global Warming Find out about what causes global warming and how you can help © 2012 This website is produced by the Student Recruitment, Admissions and International Development Division at The University of Manchester