Richard Turere: My invention that made peace with lions 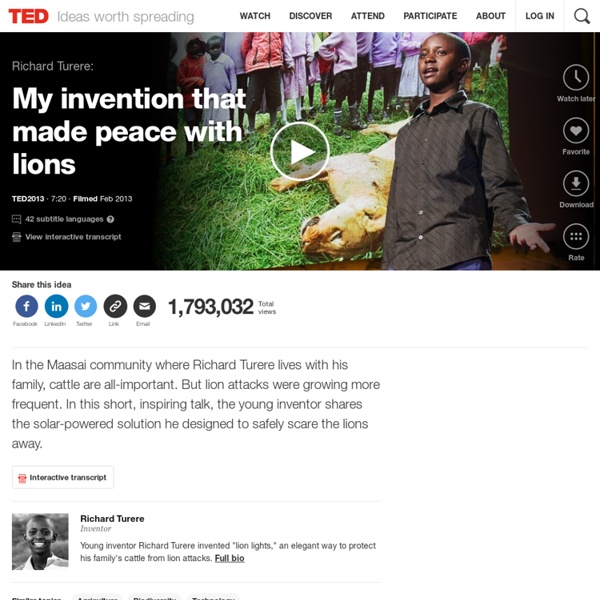 What does inequality do to our bodies? To our minds? What do a disease-fighting epidemiologist (retired) and an up-and-coming social psychologist have in common? They’re both fascinated by the unseen social problems hidden behind the word “inequality.” Beyond the lack of access to money and power — what does inequality do to us as human beings? Epidemiologist Richard Wilkinson (TED Talk: How economic inequality harms societies) spent his career studying chronic health problems — with the growing realization that most health issues are caused, or worsened, by poverty and inequality. This awareness led him to co-found the Equality Trust and co-write the book The Spirit Level: Why Equality Is Better for Everyone).

Selling the Desert's Water-Conservation Lessons to the Rest of the World The Israeli farmers who pioneered the revolutionary technology known as drip irrigation weren’t trying to solve one of the world’s most urgent problems. They were just trying to survive. They lived in the desert, and they didn’t have enough water to grow their crops. One day, they met an engineer named Simcha Blass who told them about his amazing new invention.

uk.businessinsider On Saturday, August 20, 27-year-old Singaporean lawyer Darren Tay became the Toastmasters International world champion of public speaking. He survived several rounds of a competition that lasted six months and included more than 30,000 competitors from Toastmasters public speaking clubs around the world. He and nine other finalists competed at the Toastmasters annual convention, held this year at Marriott Marquis in Washington, D.C. Tay took home first place for his speech "Outsmart; Outlast," in which he tells the story of how he met a childhood bully as an adult, and how this reformed bully surprisingly taught him a valuable insight about dealing with inner struggles. You can watch it below. Something happened while we were trying to play your video!

6 thinkers whose depressing ideas will make you feel better We are absurdly anxious about success, says popular philosopher Alain de Botton (TED Talk: Alain de Botton: A kinder, gentler philosophy of success). In his talk from 2009, he suggests that many of our modern values — like our sense of limitless possibility and upward growth — can actually lead us to stress harder about how well we’re doing. But the reverse can also be true, says de Botton.

Fight Continues to Wrest Control of Sacred Site Back From Copper Mining Co. This one appears headed for a 12-round title bout as the San Carlos Apache tribe continues its battle with Resolution Copper Co. over the issue of sacred land at Oak Flats. The mining company wants to get started on its $61.4 billion operation. Tribal opposition to prevent that from happening is gathering strength. While snowballs are not likely in either Hell or Arizona, the latter may be disproving that theory as organized opposition continues to grow larger aimed at keeping sacred tribal lands just that, sacred and tribal.

Moving From Lecture to Learning Think of something you’re really good at. Something that is important in your career and something you are proud of. It could be your ability to manage a classroom well. Remembering Robin Williams Robin Williams hijacks the TED2008 stage before the BBC World Debate. Photo: Andrew Heavens It’s 2008, moments before a BBC broadcast live from the stage at TED.

Superwheat Kernza Could Save Our Soil and Feed Us Well Kernza’s arrival has been a long time coming. The new grain variety from the Land Institute is derived from an ancient form of intermediate wheatgrass, a perennial that is actually a distant relative of wheat. And there’s a widespread team of researchers hoping their work will pave the way for an entirely new form of food. Harvard Business Professor Amy Cuddy on Success Through Incremental Challenges Amy Cuddy: People make the mistake of making these big goals, these big sort of New Year’s resolutions. And we also know that they often backfire. That, you know, by January 15 a lot of people have given up on their New Year’s resolutions. Why is it that we keep making them and keep failing? Because they’re so big, they’re so distant and they require a million little steps in between. And each of those steps is an opportunity to fail.

Video: Can we end pandemics in our lifetime? By tracking social media, it turns out, we can get much better at recognizing pandemics early. Solving epidemics has been the goal of physician Larry Brilliant’s career — and the basis for his 2006 TED Prize wish, which he updated this year in a talk at TED2013, above. His wish called for an “International System for Total Early Disease Detection,” or InSTEDD, a project with the mantra “Early detection, early response” — which included, among other features, tracking stories on the web to watch for patterns that indicate an epidemic is about to break out. After winning the TED Prize, Brilliant founded InSTEDD, a nongovernmental, multilingual, worldwide digital surveillance system that monitors the web, global news and social media for phrases and patterns that may signal a brand-new pandemic. In this update, Brilliant shares new data that shows … it’s working. In the 1990s, it took hundreds of days to identify a new potential pandemic.

Scientists Find Alarming Deterioration In DNA Of The Urban Poor The urban poor in the United States are experiencing accelerated aging at the cellular level, and chronic stress linked both to income level and racial-ethnic identity is driving this physiological deterioration. These are among the findings published this week by a group of prominent biologists and social researchers, including a Nobel laureate. Dr. This plane could cross the Atlantic in 3.5 hours. Why did it fail? by Phil Edwards on July 19, 2016 We had supersonic transport — until almost 15 years ago, when it stopped. You might remember the Concorde, the supersonic plane that came to symbolize technological optimism and extreme luxury. Though it always had critics and a high ticket price, it delivered on the promise of supersonic transport, giving riders trans-Atlantic flights in under four hours. And then in 2003, the Concorde landed for good. What went wrong?