Exposing the power of corporate lobbying in the EU 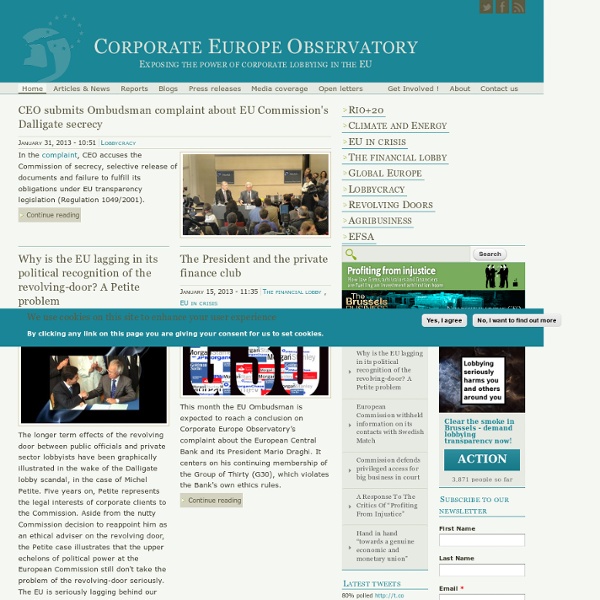 About WarIsACrime.org In October 2012 we added the names HumansForPeace.org and HumanBeingsForPeace.org because we think such a group is needed. Veterans For Peace and Code Pink Women For Peace and various nationalities for peace are all terrific efforts. Humans For Peace is a way to include everyone. Advanced Media Workflow Association AMWA and EBU have formed a Joint Task Force on a Framework for Interoperability of Media Services (FIMS) in TV Production. While the market is moving away from traditional videocentric technologies in favour of IT based ones, the design and management of enterprise level production systems is still a challenge for most broadcasters. A main obstacle has been identified in the lack of standard interfaces between components and systems that forces system integrators to devote consistent resources in the development of custom adapters to integrate components from different vendors. This in turn generates scalability and maintenance problems as the substitution or upgrade of one component can require further adaptation expenses. AMWA has set up a Media Services Architecture Group (MSAG) with a similar mandate. FIMS Request for Advice (doc, 200k)

Professor Patomäki: ‘There are good reasons to expect that the neoliberal era is coming to an end’ Continuing our interview series of public intellectuals across Europe on the causes and effects of the crisis, Euro Crisis in the Press talks to Heikki Patomäki, Professor of World Politics at University of Helsinki and author of a recent monograph on the anatomy of the Euro crisis (published in English by Zed Books in March 2013). Professor Patomäki argues that neoliberal European integration has become counterproductive; the legitimacy of the EU has hinged upon economic growth and welfare-state model which have been undermined by the real world consequences of neoclassical economic framings and policies. Radical austerity measures especially in the crisis-hit countries have worsened the situation and translated into deteriorating support for the Union. He notes that resolving the crisis through treaty-change would in reality mean more than just amending details of the initial agreements; this would necessitate changes to the philosophy and theories that underwrite the EU project.

European Energy Institute Université Paris Dauphine, France Jean-Marie CHEVALIER is currently professor of economics at the University of Paris-Dauphine, Director of the Centre de Géopolitique de l'Energie et des Matières Premières. He is also a Director at Cambridge Energy Research Associates (CERA, Paris office) and member of the Board of Directors of Nexans. ZNet Top Welcome to ZCommunications. The site has ZNet and ZMag content, topic and place pages under the Focuses link in the top menu - reading lists and whole books, debates, interviews, multimedia, Blogs, Forums, comments, a Store, Sustainer program, WISC, and more. Relating to Z

Digital Caliper Serial Interface I could use this unit that Kevin Timmerman designed! I have the same digital caliper that he designed the serial interface for. Project Page. "The caliper sends a burst of data approximately three times each second. Each burst contains 48 bits of data as shown in timing.pdf. The first 24 bits are the position relative to the zero point set on the caliper.

At your service - Who can help you?»European Ombudsman What does he do? The European Ombudsman is an independent and impartial body that holds the EU administration to account. The Ombudsman investigates complaints about maladministration in EU institutions, bodies, offices, and agencies. Only the Court of Justice of the European Union, acting in its judicial capacity, falls outside the Ombudsman's mandate. Transport & Environment If global aviation's CO2 emissions were a country, they would be ranked 7th in the world - between Germany and South Korea. We want global aviation market-based measures to begin to lower these soaring emissions. Aviation enjoys a tax-free ride - no VAT on plane tickets and no taxes on aviation fuel.

Digital Caliper Pinouts Digital calipers are one of the most important tools for accurate machining of existing pieces, such as project boxes, switches, and custom parts. This is particularly true when you don’t have the manufacturer’s datasheet to provide the dimensions of an object. Inexpensive imported digital caliper Besides the LCD display, many calipers have a digital output port for their data. Name-brand calipers charge significantly more money for the inclusion of a data port, even though they often build it into all of their models, only to be hidden by the plastic case. Europeans have been blackmailed and betrayed. No wonder they're angry The European Union was often unpopular even before the financial crisis. But the long slump and eurozone policymakers' blunders have created a political firestorm. Support for the EU has plunged to all-time lows.

VOX, CEPR’s Policy Portal VoxEU.org – CEPR’s policy portal – was set up in June 2007 to promote the dissemination of research-based policy analysis and commentary by leading economists. The intended audience is economists in governments, international organisations, academia and the private sector as well as journalists specialising in economics, finance and business as economics students. The site receives about 250,000 users per month. Assistance for the Centre's work on Vox has been provided by the European Union, through its programme of support for bodies active at the European level in the field of active European citizenship.