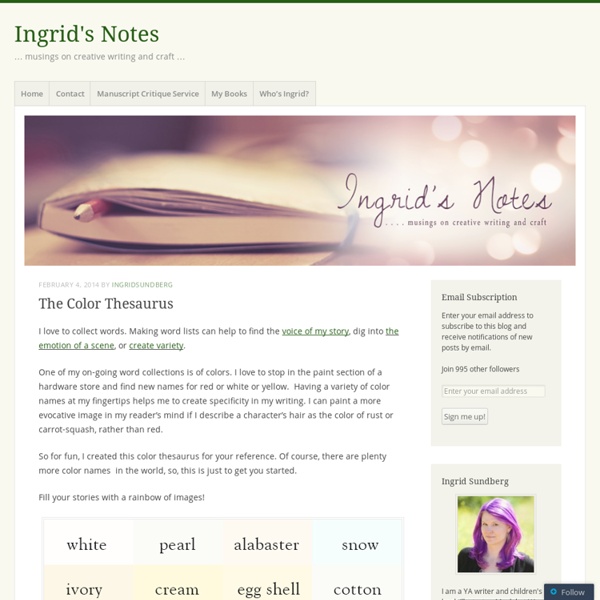 I love to collect words. Making word lists can help to find the voice of my story, dig into the emotion of a scene, or create variety. One of my on-going word collections is of colors. I love to stop in the paint section of a hardware store and find new names for red or white or yellow. Having a variety of color names at my fingertips helps me to create specificity in my writing. I can paint a more evocative image in my reader’s mind if I describe a character’s hair as the color of rust or carrot-squash, rather than red. So for fun, I created this color thesaurus for your reference. Fill your stories with a rainbow of images! Like this: Like Loading... Related:  Word Fun • douggood

12 Letters That Didn't Make the Alphabet You know the alphabet. It’s one of the first things you’re taught in school. But did you know that they’re not teaching you all of the alphabet? There are quite a few letters we tossed aside as our language grew, and you probably never even knew they existed. 1. Have you ever seen a place that calls itself “ye olde whatever”? Thorn, which was pronounced exactly like the "th" in its name, is actually still around today in Icelandic. 2. Another holdover from the Futhark runic alphabet, wynn was adapted to the Latin alphabet because it didn’t have a letter that quite fit the “w” sound that was common in English. Over time, though, the idea of sticking two u’s together actually became quite popular, enough so that they literally became stuck together and became the letter W (which, you’ll notice, is actually two V’s). 3. Yogh stood for a sort of throaty noise that was common in Middle English words that sounded like the "ch" in "Bach" or Scottish "loch." 4. 5. 6. 7. 8. 9. 10. 11. 12.

33 ways to speak better English – without taking classes | British English Coach If you’re reading this, I imagine you want to speak better English and communicate in a more confident and competent way. When we communicate effectively we are able to express our ideas and opinions, share experiences, and build relationships with others. When we struggle to express ourselves, we feel unvalued and insecure. In the modern world, we communicate across borders. By speaking better English, people all over the world can hear our voice. Well, English teachers and English classes definitely help. What you need is to become a self-directed learner, somebody who takes responsibility for their own learning and creates their own learning programme to develop their English. Now, it’s certainly true that speaking is a social activity and is best done with other people. You can do the same with your English. 1. 2. 3. 4. 5. 6. 7. I want to go for a drink tonight. How do native speakers pronounce to / for / a in the sentence? I wanna go ferra drink tenigh. 8. 9. 10. to be honest 11. 12.

Historical Thesaurus :: Home :: Welcome 7 Beautiful Words With No Direct English Translation You know that feeling you get when surrounded by close friends or family -- perhaps gathered around a fireplace after a meal, or chatting on the couch in your pajamas on a Sunday morning? There truly is no word to describe it. Or at least not in English. In Dutch, there's gezellig, which means cozy, but encompasses more than a physical feeling. This and other words without direct English translations have been compiled in the collection, Lost in Translation: An Illustrated Compendium of Untranslatable Words from Around the World. Below are 7 beautiful words with no direct English translation. Tretår -- Swedish Trepverter -- Yiddish Karelu -- Tulu Indian Kabelsalat -- German Gazelleig -- Dutch Pålegg -- Norwegian Razliubit -- Russian

19 amazing English words we've totally forgotten about 1. Twirlblast A tornado, according to people in the 1700s. Why we switched to tornado, I’ll never understand. 2. Chork The act of making the sound your shoes make when you’re walking in them and they’re full of water. 3. This actually does not refer to the activities of a successful third date, but rather refers to a specific punctuation mark that is a mixture of a question mark and an exclamation mark (‽). 4. This amazing word refers to the Medieval belief that a woman in labor could be made to feel better by giving her some cheese. 5. Poor handwriting. 6. One who gives their opinions on things they don’t know about. 7. To put a live eel up a horse’s butt. 8. Things that look nice, but are actually pretty worthless. 9. A dishonest public official. See 10 more amazing forgotten English words on page 2 >>

TESOL International Association The Phrontistery: Obscure Words and Vocabulary Resources Color Words Colour Terms This list contains 168 definitions of obscure colour terms using combinations of 'normal' colours of the rainbow and descriptive adjectives; e.g. cardinal = deep scarlet red; russet = reddish brown. Note that most English speakers outside the U.S. spell colour with the added British 'u' rather than the American version color. Don't worry if the colours (or colors) in your universe don't match up with the definitions I've given for these words, though - I've been known to have skewed perceptions of reality ... I hope you have found this site to be useful.

List of Greek words with English derivatives This is an incomplete list of Greek words with derivatives in English. There are many English words of Greek origin, with a variety of histories: vernacular borrowing, typically passing through Latin and French; learned borrowing directly from Greek; coinage in post-classical Latin or modern European languages; and direct borrowings from Modern Greek. The words (or suffixes) are in Greek alphabetic order, with tables for the 24 Greek letters, listing thousands of related English words. Transliteration[edit] There are considerable differences between the various transliterations used to represent the Greek alphabet in English. In ancient Greek, gamma was used to represent nu before a khi, ksi, kappa and another gamma. Greek words with modern derivatives[edit] The citation form shown is the form most commonly shown in dictionaries, but this form is often unrepresentative of the word as used to form a compound word, hence the root form is also shown. Α[edit] a Β[edit] b Γ[edit] g Δ[edit] d Ε[edit] z th

Top Facebook Pages for English Language Teachers Facebook can be an excellent resource for teachers of the English language! Did you know there are Facebook pages solely dedicated to English teachers? Click Here for Step-by-Step Rules, Stories and Exercises to Practice All English Tenses In this article, we list and review some of our favorite Facebook pages for English Teachers. Please note that you must be logged in to your own Facebook account to view these pages. One tip before we start: Don't just "like" these pages! Okay! Click on each page name for a link and review about the page. 1. Teaching English - British Council is just one of the fabulous pages offered by the British Council to accompany their website Teaching English. Teaching English - British Council regularly posts about resources and classroom skills, ELT events, and the British culture. Here are a few other Facebook pages for English teachers operated by the British Council: (Return to top) 2. Grammarly is a great tool for any educator! (Return to top) 3. 4. 5. 6. 7.

50 Most Challenging Words Back in 2010 The New York Times published a list of 50 fancy words that most frequently stump their readership. The New York Times 50 Fancy Words (defined and used) 1. I am glad your inchoate proposals for integrating the company were not accepted this time, thus saving us face. 2. Anderson’s profligacy cost him his job and its better you tighten up your belt before you go the same way. 3. Mr. 4. Every major war on this planet were followed by many years of austerity. 5. The firm’s profligate spending only hastened its downfall. 6. Humpty Dumpty’s antics remain a constant source of baldenfreude for children and adults alike. 7. His ludicrous attempts at mimicry in the office only earned him the opprobrium of his colleagues. 8. The millionaire technocrat and his cronies were publicly derided for being apostates, after they were exposed of polluting the environment while purporting to have spent large sums for water conservation. 9. 10. 11. 12. 13. 14. 15. 16. 17. 18. 19. 20. 21. 22. 23. 24. 25.