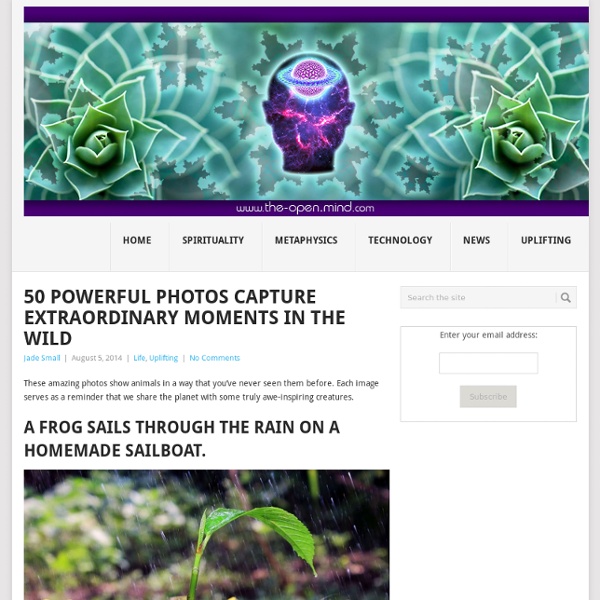 The hole in the fence Question time! If you could take a photograph of the 5 happiest moments of your life so far, what would they show? What 5 events of your future would you like to take a photograph of? 15 ice cave photos that will blow your mind Ice cave tours have become increasingly popular with photographers highlighting their natural beauty. On this page you can see some of the pictures that I have been taking during my photography workshops in Iceland. Here you can book a photography workshop in Iceland for next winter, but if you´re just looking for normal ice cave tours you can find them on Guide to Iceland.

The Profound Impact Sound, Vibration, and Frequency Have In our Daily Existence Nikola Tesla once said, “If you want to learn the secrets of the universe, think of energy, frequency, and vibration.” And indeed this is the case. Just lookaround you and realize that what may to our immediate physical senses seem tobe a solid physical reality made of smaller and larger building blocks, isactually a profoundly complex, yet fundamentally simple ocean ofvibration, harmonics, and resonance.

This bastard kills more humans than all the deadliest animals combined Ten thousand people are killed a year by SNAILS? There are evil killer SNAILS? Do they have tiny swords or vampire teeth, I can't imagine how a snail can kill you. Warning, NSFW. Don't click play if it is not appropriate. 30+ Crazy Photographers Who Will Do ANYTHING For The Perfect Shot Getting the angle and perspective for a photo just right can sometimes be very tricky, but these crazy photographers don't mind – when it comes to taking the perfect shot, they will do whatever it takes. The acts of devotion to their craft that some of the world's best photographers perform can be truly outstanding. Wildlife photographers have spent weeks camped out in the wild, allowing animals to get accustomed to their presence so that they can get the rare or intimate glimpses at their lives that others only dream of.

How Physics Gives Structure to Nature How do bees do it? The honeycombs in which they store their amber nectar are marvels of precision engineering, an array of prism-shaped cells with a perfectly hexagonal cross-section. The wax walls are made with a very precise thickness, the cells are gently tilted from the horizontal to prevent the viscous honey from running out, and the entire comb is aligned with the Earth’s magnetic field. Yet this structure is made without any blueprint or foresight, by many bees working simultaneously and somehow coordinating their efforts to avoid mismatched cells. The ancient Greek philosopher Pappus of Alexandria thought that the bees must be endowed with “a certain geometrical forethought.”

Frozen Underground for 1,500 Years, a Moss Comes Back to Life - Wired Science Scientists drilling core samples of ancient moss from Antarctic moss banks. Photo: P. Boelen Eight Norwegian Photographers You Need to Follow The Norwegian Journal of Photography (NJP) has released the latest issue of its biennial survey of the Scandinavian country’s contemporary documentary photography scene, showcasing the work of eight photographers. The publishers — photographers and photo editors Rune Eraker, Laara Matsen and Espen Rasmussen — combed through close to 100 applications and submissions to arrive at its final list of eight photographers, using funding from the Fritt Ord Foundation, a non-profit devoted to freedom of expression, to produce the high-quality book. “We look for strong voices,” Espen tells TIME, “and we also look for photographers who challenge the term ‘documentary photography’. Do they have a style, something to tell us, do they surprise us or challenge us?

40 Beautiful Nature Photography examples for your inspiration Add Comments Tag : Nature Photography, Nature Photos, Nature Pictures, Nature Nefertiti’s hand - 3D Short Film DIY Raspberry Pi WiFi VPN/TOR Router Surf the Internet securely with your very own portable WiFi VPN/TOR router. You can configure a Raspberry Pi with Linux and some extra software to connect to a VPN server of your choice. The VPN connection encrypts your internet traffic so that hackers and spies can’t figure out what web sites you are visiting, and the web sites you are visiting can’t tell which computer you are surfing from.

DamNation Explores History of Dams and Brilliance of Rivers Reborn, Premieres at SXSW DamNation explores the sea change in our national attitude toward big dams from an engineering wonder to the realization that our future is dependent on the life and health of our rivers. After watching a 30-pound salmon hurtling 20 feet into the air in a vain attempt to reach the spawning grounds that lie barricaded upriver confirmed what the creators of this film always thought to be true—too many dams for far too long have been destroying entire watersheds. In making the documentary, filmmakers traveled from Maine to California to interview dam owners, residents and politicians about the contentious issues surrounding large-scale, hydropower dams. After nearly three years in the making, DamNation premiered at the South By Southwest on Monday in Austin, TX. “When obsolete dams come down, rivers bound back to life, giving salmon and other wild fish the right of return to primeval spawning grounds, after decades without access,” reads the film’s press kit.

How to Become a Genius - Bernadinism Portrait of the artist as an inchoate genius at the age of six with a perspicacious glint in his eye. i young man came to see me the other day. He said, “Maestro, how do you become a great artist?” He was a mere youth just starting out in life.