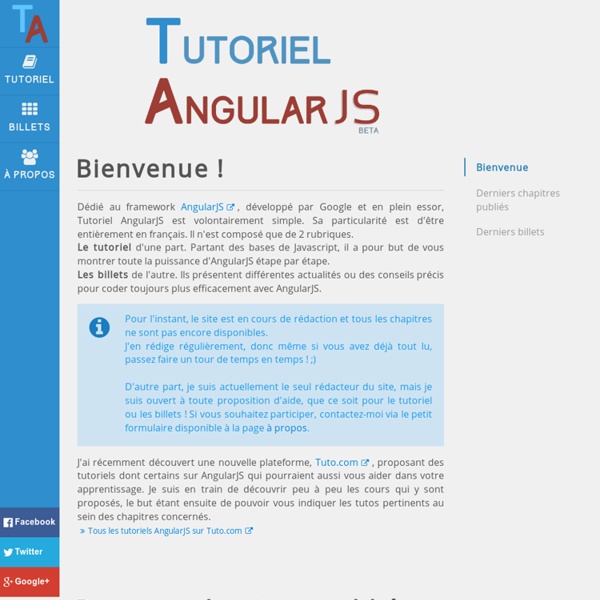 Automate Your Tasks Easily with Gulp.js As developers we often need to look at the tools we use and decide if we are using the right tool for the job. Chris did an awesome write up on Grunt early last year. But maybe Grunt just isn’t right for you. Karma Tutorial - Unit Testing JavaScript A quick start guide to testing client side code using Karma. What's Karma? Karma is a tool that enables the running of source code (i.e.

Google’s Polymer and the future of web UI frameworks Updates: At Google I/O 2013, Google presented a new web user interface (UI) framework called Polymer. The way it works is indicative of the future of all web UI frameworks. Polymer Creating a Slide Show Plugin With AngularJS Gone are the days when you used to write hundreds of lines of jQuery to create a custom image slider! It’s time to go Angular and achieve the same goal with smaller, simpler code. This tutorial will show how to create a slide show plugin with AngularJS. We will use Angular directives and animations to achieve this. If you are not familiar with directives, be sure to read my AngularJS directive series. Another nice thing about this approach is that, we are not going to write a single line of jQuery!

Dan Wahlin - Learning AngularJS by Example – The Customer Manager Application I’m always tinkering around with different ideas and toward the beginning of 2013 decided to build a sample application using AngularJS that I call Customer Manager. It’s not exactly the most creative name or concept, but I wanted to build something that highlighted a lot of the different features offered by AngularJS and how they could be used together to build a full-featured app. One of the goals of the application was to ensure that it was approachable by people new to Angular since I’ve never found overly complex applications great for learning new concepts.

Single Page Apps with AngularJS Routing and Templating Overview Single page apps are becoming increasingly popular. Sites that mimic the single page app behavior are able to provide the feel of a phone/tablet application. Angular helps to create applications like this easily. Our Simple App We’re just going to make a simple site with a home, about, and contact page. Spelling dictionaries — TeXnicCenter 2.0 documentation Additional dictionaries TeXnicCenter is distributed with English, German and French dictionaries. Dictionaries for several other languages are provided by the OpenOffice.org project. Making AJAX Applications Crawlable - Webmasters If you're running an AJAX application with content that you'd like to appear in search results, we have a new process that, when implemented, can help Google (and potentially other search engines) crawl and index your content. Historically, AJAX applications have been difficult for search engines to process because AJAX content is produced dynamically by the browser and thus not visible to crawlers. While there are existing methods for dealing with this problem, they involve regular manual maintenance to keep the content up-to-date. Learn more

AngularJS $timeout and $interval Last updated: 2014-11-19 AngularJS has two timer services, $timeout and $interval, which you can use to call functions in your application. The $timeout and $interval services are similar in their functionality to JavaScript's setTimeout() and setInterval() functions (actually belonging to the window object). The functionality of these services is also similar, so I will cover both in this text. $timeout AngularJS for XAML Devs Not long ago I was selecting a javascript framework for a large client web project. The client’s existing applications made heavy use of Microsoft technologies so one factor in my choice was how would the framework “feel” coming from a background in Microsoft UI technologies. Having built Silverlight, WPF and Windows Phone apps myself, I felt particularly drawn to AngularJS. Below I’m calling out some core XAML concepts and their corresponding concepts in Angular. Along the way I’ll also note some key differences you should understand if you’re coming from the world of XAML development.

Build a RESTful API Using Node and Express 4 # Express Router and Routes We will use an instance of the Express Router to handle all of our routes. Here is an overview of the routes we will require, what they will do, and the HTTP Verb used to access it. This will cover the basic routes needed for an API. This also keeps to a good format where we have kept the actions we need to execute (GET, POST, PUT, and DELETE) as HTTP verbs.