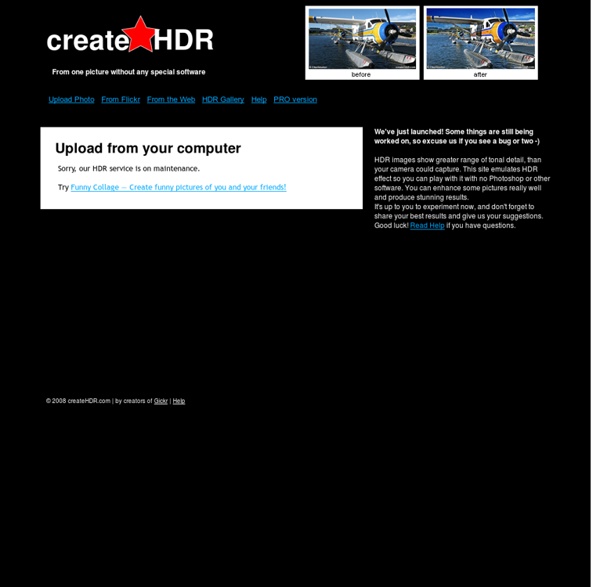 Random Song Title Generator - Creative Titles And Band Names | MODPlug Central Stuck on a title for your song? Need a crazy name for your band? Let the MODPlug Central title generator get your creative juices flowing with some randomly generated titles. Just click the GIVE ME A TITLE button and you will be presented with a random title - do not enter any text into the form: Just click on the button, and a song title (or band name - you be the judge) will appear in the box. The "Give Me A Title" button can be continuously pressed until you get a song title that you like. Custom Web Programming by StudioKraft.

Convert to cartoon - Convert photo to cartoon - Cartoonize Me - Cartoonize File Extension .WRF Details Notes about the WRF file extension: Incorrect file associations could be the result of underlying issues within your PC system. As such it is highly recommended to scan your PC for invalid registry entries, unused processes and other unfavourable system settings to identify slowdown issues. The WRF file type is primarily associated with 'WebEx' by WebEx Communications. Microsoft Office add-in for meetings, etc. Detailed information for file extension WRF: Primary association: WebEx Identifying characters Hex: 57 4F 54 46 , ASCII: WOTF Program ID: WebEx RP Other applications associated with file type WRF: ThinkFree (Write Document) by ThinkFree, Corp.ThinkFree Write is a word processing application that enables you to create documents and Web pages. 'Identifying characters' used on FILExt.com areprovided by Marco Pontello from his TrID database Important: Invalid file associations could be the result of underlying issues within your Windows PC.

FFuunn ggeenneerraattoorr ttiittllee Black and white photography by Nobuyuki Taguchi :: koikoikoi.com - Visual Arts Magazine, graphic design, illustration, photography, interviews, inspiration, tutorials Born in 1968 in Yokohama, Japan, Nobuyuki Taguchi first began his photography back in 1991, when he was studying Fine Art in Sculpture at University in London. After finishing his MA course in 1995, Nobuyuki soon developed a deep interest in Information Technology and he became an IT professional. In 1999 he started “Digital” photography and has been spending more time on his photography since. In 2007 he started publishing his Black and White Photography on the internet. In May 2009 Nobuyuki’s photography article “Eye for a difference” was published in “Amateur Photographer” magazine. I selected 28 subjects that i most like, to see more you can surf nobuyukitaguchi.com