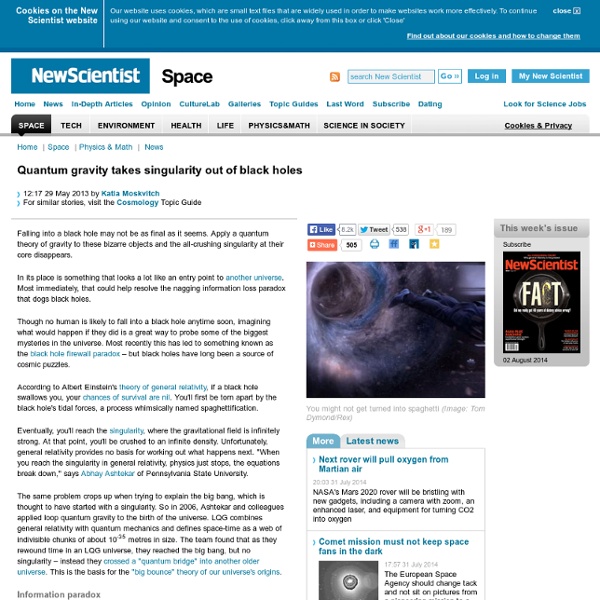 Falling into a black hole may not be as final as it seems. Apply a quantum theory of gravity to these bizarre objects and the all-crushing singularity at their core disappears. In its place is something that looks a lot like an entry point to another universe. Though no human is likely to fall into a black hole anytime soon, imagining what would happen if they did is a great way to probe some of the biggest mysteries in the universe. According to Albert Einstein's theory of general relativity, if a black hole swallows you, your chances of survival are nil. Eventually, you'll reach the singularity, where the gravitational field is infinitely strong. The same problem crops up when trying to explain the big bang, which is thought to have started with a singularity. Information paradox In this new model, the gravitational field still increases as you near the black hole's core. That would mean that black holes can serve as portals to other universes. More From New Scientist Promoted Stories Related:  Space-time

Every Black Hole Contains Another Universe? According to a mind-bending new theory, a black hole is actually a tunnel between universes—a type of wormhole. The matter the black hole attracts doesn't collapse into a single point, as has been predicted, but rather gushes out a "white hole" at the other end of the black one, the theory goes. (Related: "New Proof Unknown 'Structures' Tug at Our Universe." ) In a recent paper published in the journal Indiana University physicist Nikodem Poplawski presents new mathematical models of the spiraling motion of matter falling into a black hole. According to Einstein's equations for general relativity, singularities are created whenever matter in a given region gets too dense, as would happen at the ultradense heart of a black hole. Einstein's theory suggests singularities take up no space, are infinitely dense, and are infinitely hot—a concept supported by numerous lines of indirect evidence but still so outlandish that many scientists find it hard to accept. (Related: "Dark Energy's Demise?

Metamaterial flat lens projects 3D UV images of objects A NIST team has created an ultraviolet (UV) metamaterial formed of alternating nanolayers of silver (green) and titanium dioxide (blue). When illuminated with UV light (purple) a sample object of any shape placed on the flat slab of metamaterial is projected as a three-dimensional image in free space on the other side of the slab. Here a ring-shaped opening in an opaque sheet on the left of the slab is replicated in light on the right. (Credit: Lezec/NIST) Scientists working at the National Institute of Standards and Technology (NIST) have demonstrated a new type of lens that bends and focuses ultraviolet (UV) light in such an unusual way that it can create ghostly, 3D images of objects that float in free space. The easy-to-build lens could lead to improved photolithography, nanoscale manipulation and manufacturing, and even high-resolution three-dimensional imaging, as well as a number of as-yet-unimagined applications in a diverse range of fields. Background

Astronomers Find First Evidence Of Other Universes There’s something exciting afoot in the world of cosmology. Last month, Roger Penrose at the University of Oxford and Vahe Gurzadyan at Yerevan State University in Armenia announced that they had found patterns of concentric circles in the cosmic microwave background, the echo of the Big Bang. This, they say, is exactly what you’d expect if the universe were eternally cyclical. That’s an extraordinary discovery: evidence of something that occurred before the (conventional) Big Bang. Today, another group says they’ve found something else in the echo of the Big Bang. These bubbles probably had a violent past, jostling together and leaving “cosmic bruises” where they touched. Now Stephen Feeney at University College London and a few pals say they’ve found tentative evidence of this bruising in the form of circular patterns in cosmic microwave background. Again, this is an extraordinary result: the first evidence of universes beyond our own. So, what to make of these discoveries. Ref:

Pure Dumb Luck Saved Us from a Calamity in 2012 Sparked by One of the Strongest Solar Storms in Recorded History - ImaGeo On July 23, 2012, billions of tons of plasma exploded from the Sun and raced out into space in what was one of the most powerful solar storms ever recorded. And it’s only by chance that Earth wasn’t in the way of this gargantuan coronal mass ejection, or CME. “If it had hit, we would still be picking up the pieces,” Daniel Baker of the University of Colorado told NASA. And that may be putting it mildly. Everything that plugs into a wall socket would be disabled. For a good overview of the solar storm that almost caused this kind of mayhem in 2012, and how it compared to the notorious Carrington event of September, 1859 (which set telegraph lines on fire and caused auroral displays as far south as Cuba), check out the video above. “I have come away from our recent studies more convinced than ever that Earth and its inhabitants were incredibly fortunate that the 2012 eruption happened when it did,” Baker says. The NASA video above includes some of that imagery.

Astrophysicists on the Verge of Spotting Gravitational Waves Gravitational waves are ripples in the fabric of spacetime caused by cataclysmic events such as neutron stars colliding and black holes merging. The biggest of these events, and the easiest to see, are the collisions between supermassive black holes at the centre of galaxies. So an important question is how often these events occur. Today, Sean McWilliams and a couple of pals at Princeton University say that astrophysicists have severely underestimated the frequency of these upheavals. That has important implications. The evidence that McWilliams and co rely on comes from various measurements of galaxy size and mass. Astrophysicists know that there has been very little star formation in that time, so the only way for galaxies to grow is by merging, an idea borne out by various computer simulations of the way galaxies must evolve. That raises an interesting prospect—that the supermassive black holes at the centre of these galaxies must be colliding more often.

Giant, fluorescent pink slugs found on mountain | The Sideshow (NSW National Parks and Wildlife Service) It would seem to be something you'd see only in a cartoon or at a Phish concert, but according to park rangers in New South Wales, Australia, dozens of giant, fluorescent pink slugs have been popping up on a mountaintop there. "As bright pink as you can imagine, that's how pink they are," Michael Murphy, a ranger with the National Parks and Wildlife Service, told the Australian Broadcasting Corporation . "On a good morning, you can walk around and see hundreds of them." The eight-inch creatures have been spotted only on Mount Kaputar, a 5,000-foot peak in the Nandewar Range in northern New South Wales. Scientists believe the eye-catching organisms are survivors from an era when Australia was home to rainforests. They "probably would have long since vanished, if a volcano had not erupted at Mount Kaputar about 17 million years ago," Ben Cubby wrote in the Sydney Morning Herald . And they're not the only unusual inhabitants on the mountain.

Our earliest primate cousin discovered in Asia - life - 05 June 2013 OUR distant ancestors evolved not in Africa but Asia, in a hothouse world newly free of dinosaurs. Over 55 million years ago, in the lush rainforests of what is now east Asia, a new voice was heard in the animal chorus: the cry of the first primate. A fossil unveiled this week might give us an idea of what this crucial ancestor looked like. "For the first time we can shine a light on this critical part of the [evolutionary] tree and say what did these animals look like?" All You Need to Know about Gravitational Waves Astronomers have announced the detection of the imprint of primordial 'gravitational waves' that originated in the Big Bang that created our Universe 13.8 billion years ago. The discovery has been hailed as a milestone in science, but the concepts involved will be unfamiliar to many people. Help is at hand. Here are some FAQs on gravitational waves and their answers. What is the significance of the BICEP2 announcement? Scientists will be unravelling the consequences of this discovery for years. Albert Einstein predicted 'gravitational waves' nearly 100 years ago, but he also calculated that they would be extremely feeble, so much so that he thought they would never be detected. What are gravitational waves? Gravity, according to Einstein's general theory of relativity, is how mass deforms the shape of space: near any massive body, the fabric of space becomes curved. Is inflation the only thing that can produce gravitational waves? No. Why was the discovery made at the South Pole?

Physicists discover new way to visualize warped space-time When black holes slam into each other, the surrounding space and time surge and undulate like a heaving sea during a storm. This warping of space and time is so complicated that physicists haven’t been able to understand the details of what goes on—until now. Kip Thorne of the California Institute of Technology (Caltech) said: We’ve found ways to visualize warped space-time like never before. By combining theory with computer simulations, Thorne and his colleagues have developed conceptual tools they’ve dubbed tendex lines and vortex lines. Two doughnut-shaped vortexes ejected by a pulsating black hole. Using these tools, they have discovered that black-hole collisions can produce vortex lines that form a doughnut-shaped pattern, flying away from the merged black hole like smoke rings. The researchers explain tendex and vortex lines—and their implications for black holes—in a paper that’s published online on April 11 in the journal Physical Review Letters. Dr. Dr. Dr. Via Caltech

New 3D Printer Brings Full Color Artwork to Life | 3D Printing Most 3D printers let you create colorful objects, provided that you're willing to print out multiple pieces and connect them to each other. Artists and designers craving a little more variety in their palettes may want to take a look at the ProDesk3D printer, which can print in full color like an inkjet. The ProDesk3D comes courtesy of botObjects, a New York- and London-based company that aims to deliver a consumer printer that's both feature-rich and affordable. "Most [3D desktop printers] will extrude one color," Martin Warner, CEO and co-founder of botObjects, told TechNewsDaily. Warner explained that 3D printers employ technology called "extrusion heads," which emit filaments of different materials in the same way that inkjet printers produce ink. "That allows you to have two or three predominant colors. The ProDesk3D's creations possess fine detail in addition to rich color. Changing lightbulbs may not be much fun, but games are.