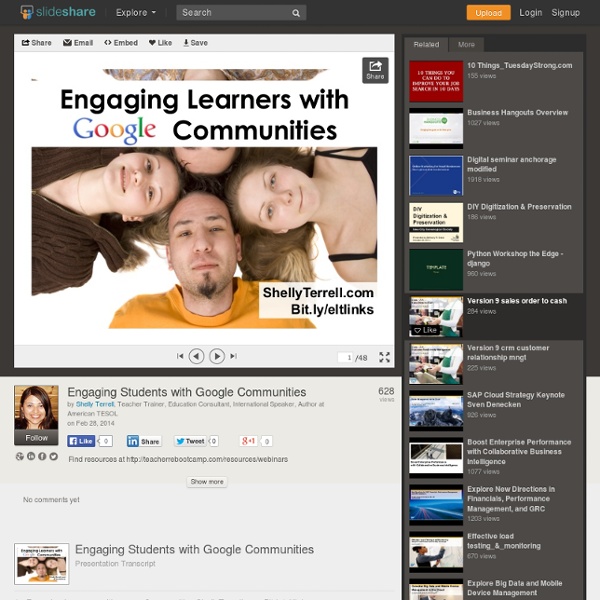 A Tutorial For Google Drive In The Classroom A Tutorial For Google Drive In The Classroom Tutorial by TeachThought Staff The use of cloud-based word processing and storage is among the most underrated examples of education technology. If literacy is the foundation of learning, tools that promote its integration can be considered equally foundational. Through the cloud, students, teachers, parents, and other stakeholders are able to access the same document. Using Google Classroom to Differentiate Assignments Creative Commons License by Eric Rice via Flickr What is nice about a digital environment is the ability to differentiate. Google Classroom allows you to build a set of resources for a single assignment. This makes it possible to offer students choices as to how they access the information or how the student would like to address the assignment. Rather than focusing on the directions for an assignment, instead focus on what the learning outcomes are suppose to be. What learning do you want students to demonstrate.

Scripts - New Visions CloudLab New Visions' Script Gallery Prior to March 2014 Apps Scripts for Google Sheets were installed and via a "locally-attached copy" made available to users through the "Script Gallery." Since then, Google has made big changes to scripts, most visibly by creating a new way of distributing them as Add-ons for Docs -- in which all users run from a single, developer-maintained copy of the codebase. 50 Of The Best Google Chrome Extensions For Teachers 50 Of The Best Google Chrome Extensions For Teachers by TeachThought Staff Google Chrome is, increasingly, where it’s at.

Google+ officially splits into Photos and Streams Google is splitting Google+ apart, breaking the social network's photo element away from what it's now calling "Streams." Bradley Horowitz, a longtime Google VP of product, announced that he had become the new lead for both new products, Google Photos and Streams, in a post on Google+ today. Horowitz steps into the role vacated by David Besbris, who took over the top job at Google+ less than a year ago. Hangouts will continue on Horowitz says that he's now running Google's Photos and Streams products — two new names for existing elements of Google+ that conspicuously don't reference the social network. The name changes could possibly suggest that Google is planning to kill or significantly alter the brand, but the company has yet to make an announcement to confirm or deny this.

Google Tutorials Upload Twitter Richard Byrne 25 Google Drive Tips You’ve Probably Never Heard Before Recently I moved over from Dropbox to Google Drive and found a few unexpected benefits. At first I had a little trouble managing the space since the 1TB on my Google Drive was bigger than my HDD, but after I got that sorted I started to learn some of the deeper features of Google Drive, some of which are pretty cool. Below is a list of the top tips and tricks I have learned from playing with Google Drive over the last few months.

Ten Minutes of Connecting: Day 19 – Collaborating with Google Docs Today’s 10 minutes of connecting is a beginner’s look at collaboration with Google Docs. There are very few places that don’t use Google Drive today to collaborate on notes, projects, presentations, thinking, etc. Google Drive allows you to create different types of shared files, like spreadsheets and presentations. Google Docs is a starting place for getting used to using cloud storage and sharing documents with others. We have embedded two instructional videos that begin at the very beginning – creating your own Google Drive.

Ten Minutes of Connecting: Day 20 – How Leaders Use Google Drive for Collaboration Today we are building on some of the learning you have been doing in this series. We have focused on a number of tools to help you connect. We hope that you are continuing to set aside 10 minutes each day to connect through one of those tools, or to learn something new with us. This series will continue to exist on our website even after November 30. You can work through it at a pace that suits you.

Little-Known Google Sheet Features and Formulas for Teachers Next up in our line of tricks for Google Drive lovers? We’re taking on Google Sheets. Here are some of our favorite features and functions (that you might not know about yet) that can be leveraged for interesting classroom projects. We also threw in some tips for formatting, translating, and validating data that are ideal for the organization-loving teacher. Images Sheets has a faster way to add images. Collaborative Learning with Google Docs The ultimate version of this style of collaboration are the “Coding Journals” the students are producing as they learn to programme robots to deepen and demonstrate their understanding of geometry. Each student is producing their “Coding Journal” using a Google Slides document as an initial template. Various slides have been created by their teachers to frame their initial thinking and provide some structure. Students add to this and make adjustments to suit their needs. Importantly each journal is shared with the teachers and with a set of peers who can all add feedback and also benefit from the shared learning.