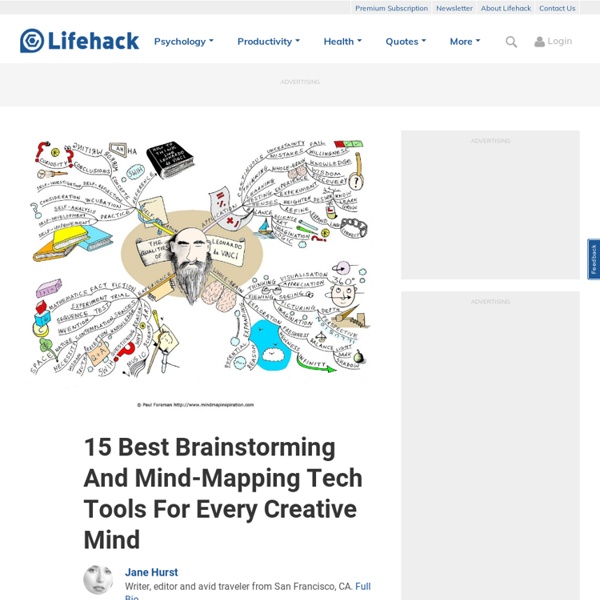 In order to be able to see a relationship between various ideas and information, we use mind mapping. This includes gathering thoughts, coming up with new ideas, project planning, and more to solve problems or have novel ideas. Today I compiled thea list of 15 mind-mapping tech tools that will help every creative mind be even more creative. If you like one particular tool I check out sites like Techradar, PCmag, Techriggs and CNET that have many insightful user reviews to get more information. 1. XMind is an open source tool that helps users to really understand their thinking and manage ideas. Cost: There are free accounts available but if you want to have extra features, you will have to pay as much as $79 per year. 2. Individuals and businesses can take advantage of being able to share ideas with collaborators. Cost: Free 3. This browser-based tool lets you manage everything on one convenient platform, so you can access anything quickly. 4. Cost: Free account for basic users. 5. 6. 7. Related:  Creativity

4 Things We Have Wrong About Creativity “Creativity” may not be the first word that comes to mind when you hear the word “conglomerate.” But Christian Stadil, CEO and co-owner of Denmark-based Thornico, a sprawling enterprise with holdings in food, technology, shipping, and others, will likely change your mind about that. Stadil is so enthusiastic about the concept of creativity that he has co-authored a new book with psychology professor Lenne Tanggaard, who teaches at the University of Aalborg in Denmark. Creativity Myth #1: You should think outside the box. Most creative breakthroughs, including ideas and products, come from well-trod areas within your own expertise, Stadil says. That kind of far-flung disconnect isn’t likely to lead to relevant new ideas. Creativity Myth #2: Big ideas come to you when you are trying to work out the problem While it may seem like breakthroughs come in a rush and tumble of ideas, true inspiration typically comes when our minds aren’t clogged with extraneous thoughts.

#5 The Four Most Powerful Types of Creative Thinking Considering I’m a creative coach, some people are surprised to learn I’m a little sceptical about creative thinking techniques. For one thing, there’s a lot more to creativity than thinking. It’s possible to sit around having lots of creative thoughts, but without actually making anything of them. But if you start making something, creative ideas seem to emerge naturally out of the process. So if I had to choose, I’d say creative doing beats creative thinking. And for another thing, a lot of ‘creative thinking techniques’ leave me cold. Having said that, here are four types of creative thinking that I use myself and which I know for a fact are used extensively by high-level creators. The text below introduces the four types of creative thinking, and the worksheet will show you how to apply the techniques to your own work. 1. Image by stuartpilbrow Reframing opens up creative possibilities by changing our interpretation of an event, situation, behaviour, person or object. 2. 3. 4.

8 tips to make your life more surprising — from a “Surprisologist” A closeup of Tania Luna, with glow stick. Photo: James Duncan Davidson In today’s talk, Tania Luna shares her experience of immigrating to the United States from Ukraine as a little girl. Commit to the mindset and process of surprise. Luna believes we can all be surprisologists. Tania Luna leads a TED audience in a glowstick dance, during a talk given a year prior to the one posted today. Thinking like a genius: overview Thinking and recall series Problem solving: creative solutions "Even if you're not a genius, you can use the same strategies as Aristotle and Einstein to harness the power of your creative mind and better manage your future." The following strategies encourage you to think productively, rather than reproductively, in order to arrive at solutions to problems. Nine approaches to creative problem solving: Rethink! Exercise #2 illustrates how famous thinkers used these approaches. Exercise #1: illustrates applications of the nine approaches. Text of exercise:Nine approaches to creative problem solving: Rethink! Thinking and recall series Concentrating | Radical thinking | Thinking aloud/private speech | Thinking critically | Thinking critically | Thinking creatively | Mapping explanation | Make your own map I | Make your own map II | Thinking like a genius: Creative solutions | Famous thinkers | Selected thoughts

Projects » TD When Does Real Learning Happen? – Tanmay Vora Learning, the real learning, happens… When you are intentional about learning When you are driven by an intrinsic need to advance and not only by external triggers and rewards. When you ask more questions to get to the WHY of things (and then to what and how) When you carry an open frame of mind that is receptive When you look for process and patterns even in discrete situations And when you use your understanding to connect the dots and look at a larger picture When you enjoy the process of learning without getting too anxious about the results and goals. Insights, Resources and Visual Notes on Leadership, Learning and Change! | Learn more about Tanmay

Realistic Lateral Thinking Puzzles Lateral Thinking Puzzles, unlike most puzzles, are inexact. In a sense, they are a hybrid between puzzles and storytelling. In each puzzle, some clues to a scenario are given, but the clues don't tell the full story. Your job is to fill in the details and complete the story. Obviously, there is usually more than one answer to any given puzzle, but, in general, only one solution is truly satisfying. You can try solving these puzzles on your own -- that's certainly a legitimate way to go about this -- but usually you can have more fun if you involve other people. Warning: For some reason, these puzzles have a tendency to be rather morbid. The scenarios given on this page are realistic, if unlikely.

Mycoted Types of creative thinking - The Second Principle Creative thinking is much more than using your imagination to crank out lots of new ideas. Creative thinking is a lifestyle, a personality trait, a way of perceiving the world, a way of interacting with other people, and a way of living and growing. Gary Davis © Leslie Owen Wilson email To create – the most complex type of cognitive thinking: Since the 1950s cognitive psychologists and researchers have been trying to explain the differences in diverse types of types of thinking. To be frank the original progressive array never set quite right with me as I always thought to synthesize something surely one had to evaluate it first. Apparently I was not alone in this criticism because in 2000-2001 a revision of Bloom’s Taxonomy was put forth and reworked. Unfortunately much of what we do in school concentrates, not on creating, but on remembering, understanding and applying. Convergence and divergence – two necessary types of thinking for being creative: