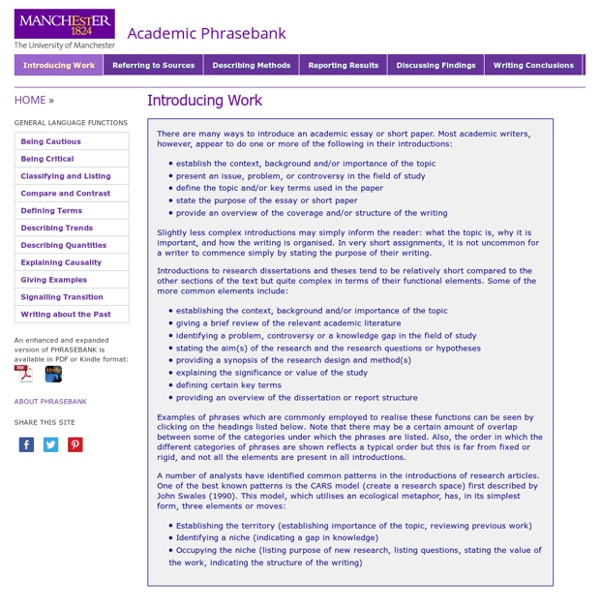 There are many ways to introduce an academic essay or short paper. Most academic writers, however, appear to do one or more of the following in their introductions: establish the context, background and/or importance of the topicindicate an issue, problem, or controversy in the field of studydefine the topic or key termsstate the purpose of the essay/writingprovide an overview of the coverage and/or structure of the writing In very short assignments, it is not uncommon for a writer to commence simply by stating the purpose of their writing. Introductions to research dissertations tend to be relatively short but quite complex in terms of their functional elements. Some of the more common elements include: Examples of phrases which are commonly employed to realise these functions are listed on the following pages. A number of analysts have identified common patterns in the introductions of research articles. Establishing the importance of the topic for the world or society

Transitioning: Beware of Velcro As the writer of an essay, imagine yourself crossing a river, guiding a troop of avid readers. You bring an armful of stones to lay down and step on as you go; each stone is a sentence or paragraph that speaks to and develops the essay's thesis, or central question. If you find yourself in the middle of the river with another mile to shore but only a few more stones, you can't finesse such a situation. You can't ask your readers to follow you and jump too broad a span. In such a case, stop.

Cmap Software Joseph D. Novak & Alberto J. Cañas Institute for Human and Machine Cognition Pensacola Fl, 32502 www.ihmc.us Technical Report IHMC CmapTools 2006-01 Rev 2008-01 Introduction Notes on academic writing I can’t give you a magic recipe for academic writing but I can describe my own practice, and share with you examples of what worked for me and what didn’t. I’ll illustrate this essay with examples from my own papers. So I’m not slagging off anybody’s work but my own. Use the introduction to “sell” the key points of your paper A rule to live by: I won’t use anything I can’t explain in five minutes. (Philip Crosby) Every now and then as editor, I see an author upset at a rejection of a paper because the referee “clearly did not grasp the key point of the paper”. In many cases this is because the key point is not stated prominently enough in the introduction, instead being buried in a footnote, an obscure remark, a lemma, or even not explicitly mentioned at all. This can be as much the fault of the author as it is of the referee; it is incumbent on the author to state as clearly as possible what the merits, novelties, and ramifications of the paper are, and the fact that an expert in the field could read the introduction and not see these is a sign that the introduction is not yet of publication quality. The introduction should also clearly state (or at least paraphrase) the main results of the paper, and ideally should also outline how and where these results are to be proved.

mathematics.library.cornell.edu Digital Projects This is a bibliography of where major collections of the digital library of mathematics and statistics are being created and archived. The sites include new literature that is being born digital and retrospective digitization of older materials. I have not attempted to create a title by title list of all that is available since we all hope that this information can be machine harvested in the future. The list of digital journals alone is dynamic and about 250 titles long. Mathematics & Statistics Generalizations of Multidimensional Continued Fractions: Tetrahedron and k-Dimensional Emmanuel Howard Daring The decimal and continued fraction expansions of a number are periodic if and only if the number is rational or a quadratic irrational, respectively. Multidimensional continued fractions aim to replicate this property with different types of irrational numbers, partitioning a triangle to produce a periodic sequence if the coordinates of the point the sequence describes are at worst cubic irrationals in the same number field. In this paper, we redefine an existing multidimensional continued fraction algorithm which partitions the triangle.

Quintilian — Institutio Oratoria — Book I, Chapters 7‑12 (Vol. I) Quintilian Institutio Oratoria Book I Chapters 7‑12 Resources for writing: handouts & links « MAA Mathematical Communication The sheer volume of advice available “out there” on writing mathematics can be quite intimidating. Here’s a (nonexhaustive) list of interesting pieces. Many of these were found by undergraduate researcher Artur Araujo. Writing mathematics well (audience is mathematicians) Terry Tao’s blog contains several posts dedicated to this topic: A fun video of Serre’s lecture about how to write badly How to Write Mathematics, by Steenrod, Halmos, Schiffer, and Dieudonne This book is a collection of four essays by Norman E.

Math jokes collection by Andrej and Elena Cherkaev The suggested collection of mathematical folklore might be enjoyable for mathematicians and for students because every joke contains a portion of truth or lie about our profession. The selected jokes and sayings contain something essential about mathematics, the mathematical way of thinking, or mathematical pop-culture.We have slightly edited and systematized selected jokes, and added a few new ones. We are concerned that publication of sacral lecture jokes may endanger the respect to math. teachers in freshmen classes. Our excuse for this risky ethnographic research is that the majority of the jokes already exists on the Internet. Sometimes, people tend to attribute the jokes either to their beloved teachers (Peter Lax is so far the champion) or to legendary figures as Norbert Wiener or Paul Erdos; similarly, physical jokes are attributed to Albert Einstein or Niels Bohr and geometrical theorems - to Euclid.

The Rules in Hacker and Sommers’s Rules for Writers (7th Ed.) 8a. Use the active voice unless you have a good reason for choosing the passive. 8b. Replace be verbs that result in dull or wordy sentences. Effective Writing Practices Tutorial - Adjective or Adverb Adverb Placement in Sentences Sometimes, the use of a certain adverb requires the inversion of the subject and the verb. If a sentence begins with a negative adverb or an adverb with restrictive meaning, it must have an inverted word order. Some other adverbs with restrictive meaning that require inversion of the verb and subject are: hardly ever hardly... when in no circumstances neither/nor no sooner... than not only nowhere