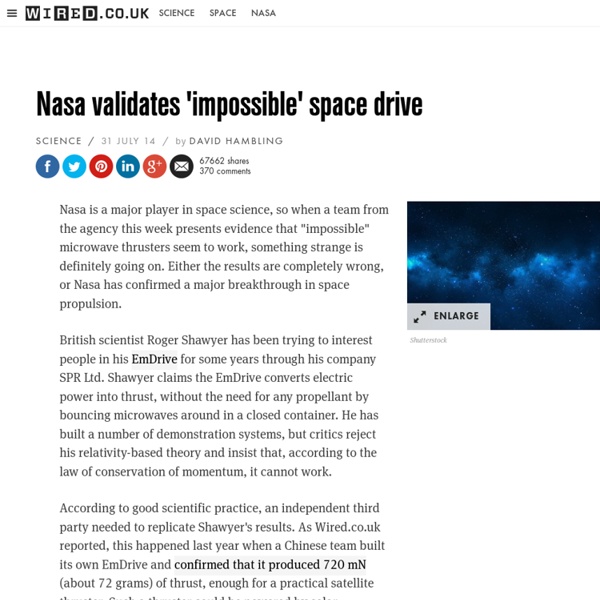 Nasa is a major player in space science, so when a team from the agency this week presents evidence that "impossible" microwave thrusters seem to work, something strange is definitely going on. Either the results are completely wrong, or Nasa has confirmed a major breakthrough in space propulsion. British scientist Roger Shawyer has been trying to interest people in his EmDrive for some years through his company SPR Ltd. Shawyer claims the EmDrive converts electric power into thrust, without the need for any propellant by bouncing microwaves around in a closed container. He has built a number of demonstration systems, but critics reject his relativity-based theory and insist that, according to the law of conservation of momentum, it cannot work. According to good scientific practice, an independent third party needed to replicate Shawyer's results. However, a US scientist, Guido Fetta, has built his own propellant-less microwave thruster, and managed to persuade Nasa to test it out.

Largest ever Ebola outbreak is not a global threat Sylvain Cherkaoui/Cosmos/eyevine Health-care workers at an Ebola treatment centre in Sierra Leone. Deadly Ebola probably touched down in Lagos, Nigeria, the largest city in Africa, on 20 July. A man who was thought to be infected with the virus had arrived there on a flight from Liberia, where, along with Guinea and Sierra Leone, the largest recorded Ebola outbreak is currently raging. Is it worrying that the virus reached the largest city of the most populous African country? The World Health Organization still considers the Lagos case a “probable” infection because it has not yet confirmed that the 40-year-old Liberian man had Ebola. What about the risk of air travellers exporting the virus to other cities? The ECDC also says the probability of an infected person getting on a flight in the first place is low, given the small overall number of Ebola cases. Wait, Ebola is hard to catch? So why is the outbreak continuing in Guinea, Sierra Leone and Liberia? What kind of sociocultural factors?

If The Earth Stopped Spinning, Some Really Bad Things Would Happen Sometimes it's easy to forget that the Earth and everything on it are rotating. But it's a good thing that our planet keeps spinning, because if it suddenly stopped it would unleash a torrent of catastrophes. Just listen to what Michael Stevens has to say in this new installment of his Vsauce YouTube series. "First of all, you would gain weight," Stevens says, a reference to the fact the Earth's rotation slightly offsets the effect of gravity. That's because you'd suddenly be facing winds as fast as those created by atomic bomb blasts and tsunamis kilometers high. Things would be especially bad near the equator, where the surface of the Earth rotates fastest. For the full explanation, check out the video above.

This Computer Knows When "Literally" Isn't Literal There’s been a literal firestorm in recent years on the proper meaning of “literally” — including the uproar over its non-literal opposite meaning being added to respected dictionaries. Language is funny that way. We say things that are utterly false, but we seem to understand what the other person means, regardless. Intrigued by this quirk in communication, researchers built the first computational model that can predict humans’ interpretations of hyperbolic statements. (Literally.) Modeling Exaggeration Separating literal from figurative speech is actually quite complicated. Researchers from Stanford and MIT set out to create a program that could. The results seemed intuitive: A statement claiming the kettle cost $10,000 was viewed as hyperbolic, but a price tag of $50 was interpreted as a literal statement. Complicated Speech When researchers applied the model to the statements evaluated by human participants they found that it closely matched human judgments of hyperbole.

image uploaded by @Acrocephalus (Acrocephalus |*|) How Quantum Mechanics Helps Us Breathe (Inside Science) – Why don't we suffocate whenever we try to take a breath? An international team of scientists has used quantum mechanics – the science that usually deals with events at the level of the ultra-small – to solve this human-sized mystery. Quantum mechanics has long proved its value in understanding such phenomena as the behavior of electrons and in classifying subatomic particles. But in recent years theorists have increasingly shown how it applies to all facets of life, large and small. The new research, led by Cédric Weber of Kings College, London and reported in the journal Proceedings of the National Academy of Sciences, confirms that point. The conundrum elucidated by Weber's team stems from the way in which carbon monoxide reacts with proteins that carry oxygen around our bodies. Those proteins, which contain iron atoms, transport oxygen molecules through the bloodstream to wherever the body needs them. In response, the team employed two fresh approaches to the problem.

Spain needs 'major cultural change' to do better in science, international panel says BARCELONA, SPAIN—More cash and many profound structural changes—that, according to a panel of European experts, is what Spain's national science and innovation system needs to become more competitive. A full report will be issued later, but on Thursday, the group released a six-page document containing its key messages. It says the Spanish government should raise its contribution to science and innovation to 0.7% of the gross domestic product (GDP) and argues for the creation of a national funding agency that gives out merit-based grants, more autonomy for the universities, and a major overhaul of Spain's national research centers. Above all, what is needed is a stronger culture of evaluation and accountability, even if it means increasing inequality between universities, the document says. The report acknowledges “islands of excellence” in Spain, in particular a fleet of recently created research institutes that enjoy greater autonomy.

Study Ties PALB2, A Newly Identified Gene, To Major Breast Cancer Risk It's long been known that faulty BRCA genes greatly raise the risk for breast cancer. Now scientists say a more recently identified, less common gene can do the same. Mutations in the gene can make breast cancer up to nine times more likely to develop, an international team of researchers reports in this week's New England Journal of Medicine. About 5 to 10 percent of breast cancers are thought to be due to bad BRCA1 or BRCA2 genes. The new study on the gene— called PALB2 — shows "this one is serious," and probably is the most dangerous in terms of breast cancer after the BRCA genes, said Weitzel, one of leaders of the study. It involved 362 members of 154 families with PALB2 mutations — the largest study of its kind. That's nearly as high as the risk from a faulty BRCA2 gene, Dr. The PALB2 gene works with BRCA2 as a tumor suppressor, so when it is mutated, cancer can flourish. The study was funded by many government and cancer groups around the world and was led by Dr. Online: