Project-based learning, the USA and Authentic Video in the EFL classroom 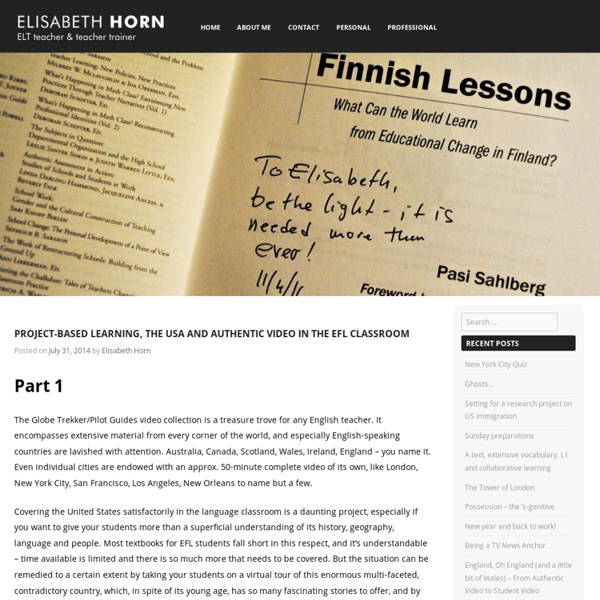 The Globe Trekker/Pilot Guides video collection is a treasure trove for any English teacher. It encompasses extensive material from every corner of the world, and especially English-speaking countries are lavished with attention. Australia, Canada, Scotland, Wales, Ireland, England – you name it. Even individual cities are endowed with an approx. 50-minute complete video of its own, like London, New York City, San Francisco, Los Angeles, New Orleans to name but a few. Covering the United States satisfactorily in the language classroom is a daunting project, especially if you want to give your students more than a superficial understanding of its history, geography, language and people. Most textbooks for EFL students fall short in this respect, and it’s understandable – time available is limited and there is so much more that needs to be covered. In addition to making this initial decision, there are quite a lot of follow-up issues to consider: The next step is more work-intensive.

Using Silent Video in the EFL Classroom This video is the BOMB! It is captivating, absorbing, a story par excellence but also SILENT! Yes, silent films are great for getting students to produce language — and after all is said and done, that most often is the hardest thing to do, getting the students speaking and learning language by just communicating. 5 TED-Ed Lessons to use in your American History classroom Carla Staffa, Burnsville Senior High School American history teacher (and all-around rockstar), uses TED-Ed Lessons in her classroom to supplement her curriculum, start conversation and spark curiosity. We caught up with Carla to find out which lessons she uses the most and what she hopes her students take away from each one. 1.) The fight for the right to vote in the United States - Nicki Beaman Griffin “The fight for the acquisition of voting rights is one that has been fought by numerous groups, yet not all eligible voters take advantage of this right.

I forgot my phone This EFL lesson is designed around a beautiful short film by Miles Crawford titled I lost my phone and the theme of mobile phones. Students listen to a film and speculate about what is happening, watch the film to check their answers and talk about mobile phone use. Language level: Intermediate (B1) – Upper Intermediate (B2) FASTEN SEAT BELTS 2 - Travel by Continent - Europe Fasten Seat Belts, a light hearted guide to avoid misunderstandings while travelling. An innovative way to learn languages and pick up cultural tips. Travel by Continent / Europe

English Lesson Plans on American Presidents “I am certain that after the dust of centuries has passed over our cities, we, too, will be remembered not for victories or defeats in battle or in politics, but for our contribution to the human spirit.” ~ John F. Kennedy 43 Ready-Made Lesson Plans Our American Presidents lesson section is finally complete! Video Lesson Framework – short animations It’s getting close to the end of the year, when it starts getting difficult for our students to maintain their motivation for English and when teachers are busier with testing and reports and the like. My students have been clamouring for a video lesson for weeks now, but I always feel as though I would be short changing them with a feature length film – so my concession to their desperate desire is the cartoon. I have in the past used this lesson framework with Tom & Jerry cartoons – they tend to be around the ten minute mark and as there’s no dialogue they work well for lower level classes and especially well with young learner classes. That said, some of the content is quite dated and is what you might call “a product of it’s time” – in short you might want to review them to make sure they fit your context before using them in class. More recently I prefer using Shaun the Sheep

English-speaking countries Have you ever wondered why you have to learn English at school? Did you know that the world speaks English? Do you know how many countries in the world have English as an official language? First, you need to know the origins and history of the English language. Visit the links on the left in the correct order to find out many interesting facts and figures about English, and try to answer these questions (you may want to copy the questions into your notebook or print them out to make your work easier):

The History of Native American Religion Native American religion is hard to explain. This is because there were very many tribes the religious principles were passed down verbally. Many of these groups had their own beliefs though many of them were similar in the major aspects. Native American religion tends to focus around nature. Maybe This EFL lesson plan is designed around a short film called Maybe by Jgrey and the themes of daydreaming and love. Students describe a photo, speculate, write sentences using “maybe”, and watch a short film. Language level: Intermediate (B1) – Upper Intermediate (B2) Learner type: Teens and adults Time: 60 minutes Activity: Describing a photo, speculating, writing sentences using “maybe”, and watching a short film

U.S: Geography, states, landmarks, maps, cities, population, laws, speeches U.S. States, Cities, History, Maps Year by Year: 1900–2015 Short-Film – Learn English with videos An award-winning short movie from 2014. Brothers Julio and Marvin become restless during the reading of the Passion, and begin playfully slapping one another with palms they received upon their visit to church. Unsurprisingly, their mother is not amused with their behavior.