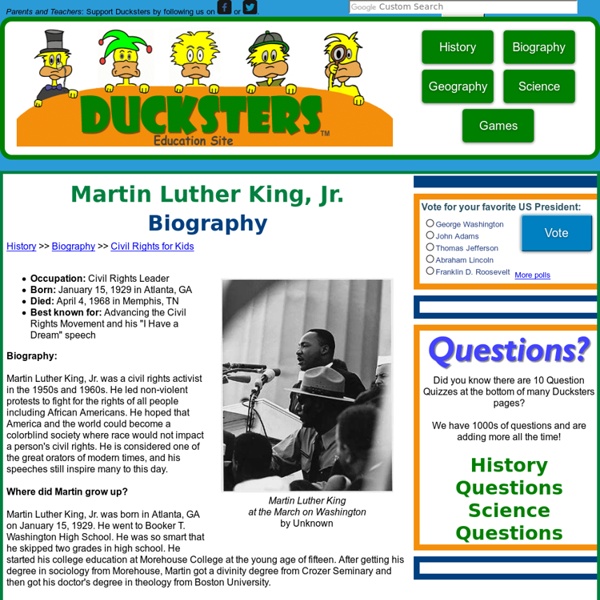 Civil Rights Act of 1964 History >> Civil Rights for Kids The Civil Rights Act of 1964 was one of the most important civil rights laws in the history of the United States. It outlawed discrimination, ended racial segregation, and protected the voting rights of minorities and women. President Lyndon Johnson signing the law March on Washington History >> Civil Rights for Kids Background Despite gaining their freedom from slavery after the end of the civil war, African Americans were still facing legal discrimination in the 1950s and early 1960s. This included segregation of schools, lower wages, and discrimination when applying for jobs. The civil rights movement was an effort to bring these issues to the attention of lawmakers and the nation.

Martin Luther King I Have a Dream Speech - American Rhetoric Martin Luther King, Jr. I Have a Dream delivered 28 August 1963, at the Lincoln Memorial, Washington D.C. Martin Luther King Day In the late 1950s and early 1960s, African Americans, led by Dr. Martin Luther King, Jr., used boycotts, marches, and other forms of nonviolent protest to demand equal treatment under the law and an end to racial prejudice. A high point of this civil rights movement came on August 28, 1963, when more than 200,000 people of all races gathered in front of the Lincoln Memorial in Washington, D.C., to hear King say: "I have a dream that one day on the red hills of Georgia the sons of former slaves and the sons of former slaveholders will be able to sit down together at the table of brotherhood....I have a dream that my four little children will one day live in a nation where they will not be judged by the color of their skin, but by the content of their character."

African-American Civil Rights Movement History >> Civil Rights for Kids March on Washington Aug 28, 1963from the United States Information Agency The African-American Civil Rights Movement was an ongoing fight for racial equality that took place for over 100 years after the Civil War. Biography for Kids: Ruby Bridges History >> Biography >> Civil Rights for Kids Occupation: Civil Rights Activist Born: September 8, 1954 in Tylertown, Mississippi Best known for: First African-American student to attend an all-white elementary school in the South Biography: Where did Ruby Bridges grow up? Ruby Bridges grew up on a small farm in Tylertown, Mississippi. Her parents were sharecroppers, meaning they farmed the land, but didn't own it. When Ruby was four years old, her family moved to New Orleans. In New Orleans, Ruby lived in a small apartment where she shared a bedroom with her sister and two younger brothers.