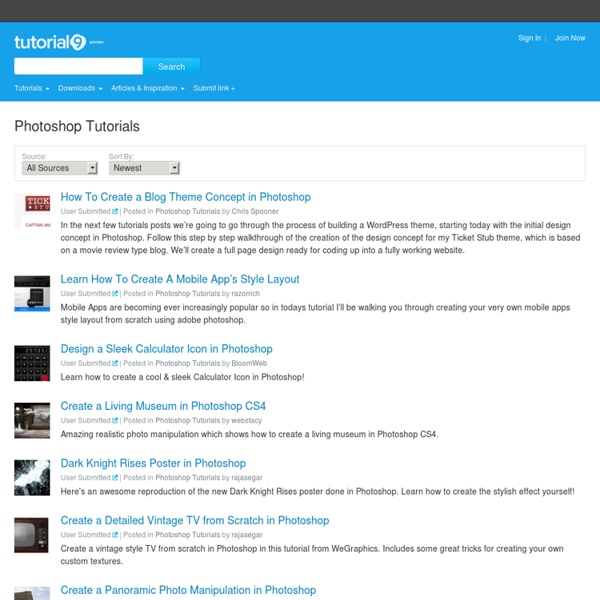 Creating a Typographic Wallpaper After writing my previous tutorial here about Creating a Zune in Photoshop, several viewers asked if I’d share how I created the wallpaper graphic. In this tutorial, you’ll learn how to make something similar, and it’s quite easy! What is Typography? In order to create a typographic wallpaper, it would make sense to know a bit about Typography in the first place. Typography is the art and technique of arranging movable type. Photoshop Tutorial: Master Polygons Part 1 Download some of the tutorial files here Thanks go out to Ryan Barber for this tutorial. See more of his work at Design a Vibrant Blackberry Inspired Ad in Photoshop This post was originally published in 2009 The tips and techniques explained may be outdated. The Blackberry Loves U2 TV promo features some awesome, bright and vibrant lighting effects. Let’s take a look at recreating the style to produce a Blackberry inspired design of our own. Much like the old Apple/Coldplay advertisement, the new Blackberry Loves U2 promo features some stunning visual effects.

Photoshop Tutorials Create A Scrapbook Alphabet In this Photoshop Text Effect you'll learn to create a simple Scrapbook style text effect that can be used as a stand alone word treatment or converted to individual reusable .png files with a transparent background. Create A 3D Push Pin In this Photoshop tutorial I'll show you how to create a 3D Push Pin using Photoshop Extended's 3D drawing and rendering capabilities. Put your 3D glasses on and enjoy the show! Modern 3D Text Effect Create a Spectacular Flaming Meteor Effect on Text Take typography one step further by having text falling from the sky in a burning inferno. Yes, this is the text-on-fire tutorial to end all tutorials. It uses a little Illustrator for the text and a lot of Photoshop to burn up the screen! In previous tutorials you've seen two smoke effects that I've created, but let's face it, you can't have smoke without a fire somewhere.

Adobe Photoshop Tutorials – Best Of - Smashing Magazine Advertisement Meet the new Sketch Handbook, our brand new Smashing book that will help you master all the tricky, advanced facets of Sketch. Filled with practical examples and tutorials in 12 chapters, the book will help you become more proficient in your work. Get the book now → Most people who have designed websites or apps in Photoshop will, at one point or another, have had issues trying to match colors in images to colors generated by HTML, CSS or code. How To Make a Cool Cinemagraph Image in Photoshop No doubt you’ll have heard of the term Cinemagraph since it exploded onto the Internets. Originally coined by Photographers Kevin Burg and Jamie Beck, a cinemagraph is a clever revival of the classic animated GIF. It combines features of video and photography to create a the illusion of a still image but with cool motion effects. Let’s take a look at how to create your own animated GIF cinemagraph by playing around with Photoshop’s animation tools.