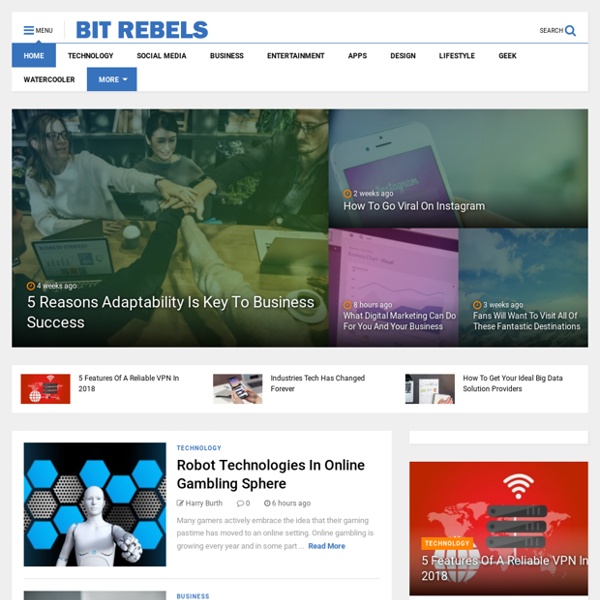 Webware : Cool Web apps for everyone Keedox Bluetooth Sport Earbuds Compact and lightweight, behind-the-head cable design, sweat-proof, stay-put, comfort ear tips, Bluetooth 4.0 w/ NFC 'quick-pairing', built-in mic for hands free and and great sound all at a super affordable, low price. Lesley the Unicef sponsored woman golfer From: Les CopelandDate: Thursday 15 Jan 2009 4.19pmTo: David ThorneSubject: Poor black boy What kind of a complete fucking moron makes fun of starving children? What a pathetic attempt at humour. I have spent time in third world countries and seen children starving with my own eyes and I think you seriously need to grow the fuck up.

Social Media and Authenticity It was only a matter of time. According to numerous articles on the web - you can now buy Google +1′s. For as low as 19.99 – but wait, there’s more! For years we have been inundated with tweets and offers that guarantee you hundreds, nay, thousands of followers and friends. Styling Tips For Long Hair On Men (Beauty & Style: Hair Care For Men) VideoJug give you some great styling tips for long hair on men. Long hair on men can take some effort to maintain, but with these simple styling tips, you will be able to master your flowing locks. Step 1: Care for your hair Long hair needs to be maintained in peak condition as damaged hair will look strangely and unkempt. Healthy hair is much easier to style and manipulate so you'll be making your like easier if you look after it.

How to Combine QR Codes With the Power of Facebook Are you looking to leverage the popularity of QR (Quick Response) codes with the wide-spread adoption of Facebook? Over the past several months, QR codes have inserted themselves squarely into digital media conversation (even appearing on late-night TV). In this article, I’ll unpack how to get your QR codes to go viral on Facebook. I’ll start by walking you through the process and an example campaign, and conclude with an analytical discussion examining five need-to-know success factors. Setting Up a Viral QR Code Campaign Step #1: Generating the QR code Star Wars In The Form Of Mexican Traditional Art « Bit Rebels Once again the brainchild of someone else has completely taken me by surprise. No wonder we have something called a viral social media phenomenon. It’s amazing what people come up with and how inspiring it is every time you manage to cross roads with something new and fresh. Even though this art style isn’t exactly new, it is for the Star Wars brand. It’s so fresh as a matter of fact that I haven’t even thought about the connection until I saw these wonderful drawings.

How to make a DIY home alarm system with a raspberry pi and a webcam Step #1: Make your webcam stealth I wanted to hide the camera in an inconspicuous place outside my door, so I removed the webcam’s casing. The Logitech C270 is a really good choice for this project as (1) it is 100% compatible with pi, (2) it has a really good 720p HD resolution and (3) it is very very small. Here’s how to make the camera ‘stealthy’: You can now connect your webcam to the usb hub. You have to use an external usb hub with an independent power supply as the raspberry pi cannot power the webcam by itself.

The Complete Picture with Julieanne Kost - Top 10 Little-Known Features in Photoshop CS4 Share this Episode Autoplay End of Video Twitter users are more likely to impact your brand than any other social network Now, more than ever, is the time for brands and companies to begin understanding how the chaotic and real-time world of Twitter can massively influence the ways in which consumers perceive them. With so many different channels of communication and new social networks popping up every other day, it’s not difficult to see why brands tend to miss the mark when it comes to efficiently using individual marketing platforms for their intended purpose. For example, although Facebook is obviously a social networking tool, the majority of consumers who use Facebook are not quite the same as Twitter users when it comes to influencing the general public about a brand.

20 Ways to Stimulate Your Own Creativity What distinguishes a creative person from one who isn’t? Aren’t we all creative on some level? I believe the answer to this question is yes; however, there are definitely some people that have an easier time staying in a creative and inspired mindset than others. According to Mark McGuinness, “We can probably all recognize the classic image of the artist or creative person.

HOW TO: Send an Audio Tweet When Twitter’s 140-character limit just isn’t enough to get your message across, or you want to give a tweet the personal touch, why not add some audio? We've already brought you ways to share music on Twitter, but the solutions below will help you share the spoken word. Whether you want to sing happy birthday to someone, rant, or make a heartfelt apology, we’ve found five services that can help you out. Only after disaster can we be resurrected « Life on the road Posted by afterlife under Personal[8] Comments “Only after disaster can we be resurrected. It’s only after you’ve lost everything, that you’re free to do anything.” – Tyler Durden (Fight Club) Back long ago I was interested in this girl and finally got up the nerve to ask her over on a date.