Things You Can Do To Get Smarter 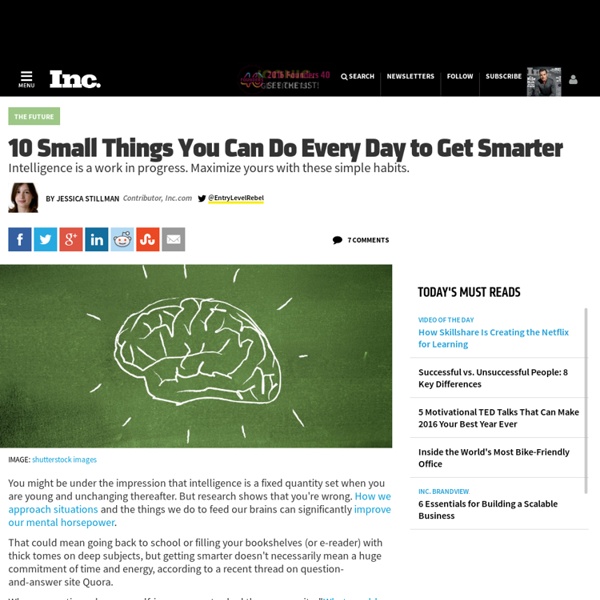 You might be under the impression that intelligence is a fixed quantity set when you are young and unchanging thereafter. But research shows that you're wrong. How we approach situations and the things we do to feed our brains can significantly improve our mental horsepower. That could mean going back to school or filling your bookshelves (or e-reader) with thick tomes on deep subjects, but getting smarter doesn't necessarily mean a huge commitment of time and energy, according to a recent thread on question-and-answer site Quora. When a questioner keen on self-improvement asked the community, "What would you do to be a little smarter every single day?" lots of readers--including dedicated meditators, techies, and entrepreneurs--weighed in with useful suggestions. 1. Every online break doesn't have to be about checking social networks and fulfilling your daily ration of cute animal pics. 2. 3. 4. Board games and puzzles aren't just fun but also a great way to work out your brain. 5. 6.

15 Small Habits That Can Make You Really (Really) Smart In 2015 Getting smarter takes time and genuine commitment. You need to work hard at it. Knowledge builds up, like compound interest says Warren Buffet. And he couldn’t have said that any better. Why We Often Repeat the Same Mistakes If there’s anything that stings more than wasting good money on a subpar outing, it’s going so repeatedly—but still, the depths of TripAdvisor teem with accounts of mistakes that were made not once, but twice. “Came back for lunch even though I didn’t enjoy my last meal here,” writes one unfortunate diner whose salad at a restaurant in Bunbury, Australia, came drenched in dressing. Another guy found the Sistine Chapel a little meh. “Sure I could glance at the magnificence of the final judgment, but not for long as inevitably someone bumped me,” he harrumphed about his initial visit, adding that he later returned (why?) when friends were in town. “Never again!”

Be Productive: How I Became a Morning Person - Motto Five years ago, I decided to become a morning person. It didn’t come naturally to me. When I had to wake up early—for a meeting, an event, or class—it was like the vignette above. I struggled to get out of bed. Often I barely made it to my engagement on time. Managing with the Brain in Mind Naomi Eisenberger, a leading social neuroscience researcher at the University of California at Los Angeles (UCLA), wanted to understand what goes on in the brain when people feel rejected by others. She designed an experiment in which volunteers played a computer game called Cyberball while having their brains scanned by a functional magnetic resonance imaging (fMRI) machine. Cyberball hearkens back to the nastiness of the school playground. “People thought they were playing a ball-tossing game over the Internet with two other people,” Eisenberger explains. “They could see an avatar that represented themselves, and avatars [ostensibly] for two other people. Then, about halfway through this game of catch among the three of them, the subjects stopped receiving the ball and the two other supposed players threw the ball only to each other.”

20 Websites Every College Student Needs In Their Life So maybe last semester didn't go exactly as you had planned. You came back from summer vacation with glowing skin and all the best intentions. This was going to be the year, you said. You were going to focus on classes and get that GPA up to something Mom would be proud of. Unfortunately, good intentions only go so far. How to Change Your Morning Routine - Motto The first few minutes of your morning are the most important of your day and can set the tone for positivity and productivity. Ideally, you have an app or clock that taps into your natural circadian rhythm and wakes you during your "best time" within a certain window. Getting jarred out of a deep REM slumber to the sound of a blaring alarm clock sets you up for a negative day brimming with fatigue and crankiness. But getting the right alarm clock is only part of the battle. Here are six ways to start your morning better while kicking bad habits that destroy good sleep hygiene.

Eight Habits that Improve Cognitive Function Digital games are incapable of giving the entire brain a full workout. These digital programs can't really exercise the cerebellum (Latin: "Little Brain") and, therefore, are literally only training half your brain. These "brain-training workouts" are the equivalent of only ever doing upper body workouts, without ever working out your lower body. Why Understanding These Four Types of Mistakes Can Help Us Learn by Eduardo Briceño This article was first published in the Mindset Works newsletter. We can deepen our own and our students’ understanding of mistakes, which are not all created equal, and are not always desirable. After all, our ability to manage and learn from mistakes is not fixed. We can improve it. Here are two quotes about mistakes that I like and use, but that can also lead to confusion if we don’t further clarify what we mean:

What Are the 3 Steps to Becoming Stress-Proof? - Motto 1) Know What Really Works Most of the things you instinctively do to relieve stress don’t work. Via The Willpower Instinct: How Self-Control Works, Why It Matters, and What You Can Do To Get More of It: 10 Surprising Things That Benefit Our Brains That You Can Do Every Day One of the things that surprises me time and time again is how we think our brains work and how they actually work. On many occasions I find myself convinced that there is a certain way to do things, only to find out that actually that's the complete wrong way to think about it. For example, I always found it fairly understandable that we can multitask. Well, according to the latest research studies, it's literally impossible for our brains to handle two tasks at the same time. Recently I came across more of these fascinating experiments and ideas that helped me adjust my workflow toward how our brains actually work.

32 Legitimate Ways to Make Money at Home - The Penny Hoarder Disclosure: Some of the links in this post may be affiliate links. We’re letting you know because it’s what Honest Abe would do. After all, he is on our favorite coin. Listen – we all know the internet is full of work-from-home scams, so we’ve scoured through thousands of different ideas to find you 32 legitimate ways to make money at home. These are all ideas that we’ve done before, so we know that they’re real and that you’ll get paid.

120 Ways to Boost Your Brain Power Here are 120 things you can do starting today to help you think faster, improve memory, comprehend information better and unleash your brain’s full potential. Solve puzzles and brainteasers.Cultivate ambidexterity. Use your non-dominant hand to brush your teeth, comb your hair or use the mouse. Write with both hands simultaneously. 11 Free Websites to Practice English at Home RTlibrary on FlickrAt the New York Public Library's Adult Learning Centers, where adults work on basic English and literacy skills, we're often asked for recommendations of websites for adults to practice English at home. Below you'll find eleven sites, some with a focus on listening, some on vocabulary, others on grammar, and some with a range of activities. Happy learning!