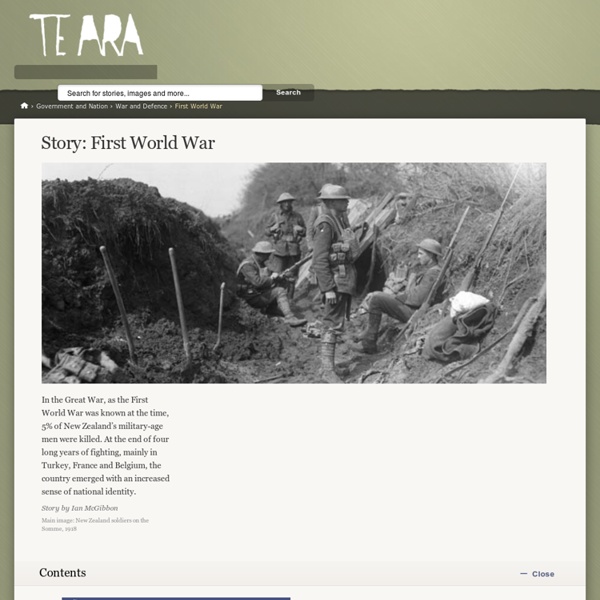 Origins The First World War was caused by the destabilisation of the balance of power in Europe due to the rise of Germany. The war began in 1914 when Austria-Hungary invaded Serbia because of the assassination of an archduke. Countries had made alliances with each other, and soon most of Europe was at war. New Zealand was part of the British Empire, and when Britain declared war on Germany, in August 1914, that meant New Zealand was at war too. The two sides were called the Central Powers (Germany, Austria-Hungary) and the Allies, which included the British Empire, Russia and France. New Zealand enters the war New Zealand decided to send soldiers to fight in the war for a number of reasons, including New Zealand’s strong ties to Britain and its concern with keeping trade routes open so it could continue to export to Britain. Within a month New Zealand troops had occupied Western Samoa, which was a German territory. Gallipoli Turkey had entered the war on the Central Powers side. Related:  World War One

In the trenches of 1914-1918 What were the trenches? Although most of us think primarily of the Great War in terms of life and death in the trenches, only a relatively small proportion of the army actually served there. The trenches were the front lines, the most dangerous places. But behind them was a mass of supply lines, training establishments, stores, workshops, headquarters and all the other elements of the 1914-1918 system of war, in which the majority of troops were employed. The trenches were the domain of the infantry, with the supporting arms of the mortars and machine-guns, the engineers and the forward positions of the artillery observers. Why were the trenches there? The idea of digging into the ground to give some protection from powerful enemy artillery and small arms fire was not a new idea or unique to the Great War. What were the trenches like? The type and nature of the trench positions varied a lot, depending on the local conditions. The enemy had a very similar system of trenches.

WWI Battlefields Gallipoli and the Anzacs | The Anzac landing at Gallipoli The Anzac landing: overview Why did theAnzacs land? 25 April 1915: Anzac Cove, Gallipoli Historians still debate whether the Anzac troops were landed at the correct place. Why did the Allied commanders send Australian troops to land on a beach before rugged hills, ridges and steep gullies? ‘The attack on Gallipoli was one of the more imaginative strategies of the First World War ... A brief description of the Anzac Landing... It was only shortly after the landing that high command let it be known that an error had been made – the landing should have been made on Brighton Beach, south of Anzac Cove and in a locality of relatively friendly topography. The boat I was in landed on the point. Read a brief description of the landing – an excerpt from Denis Winter's book, 25 April 1915 – The Inevitable Tragedy. more ... Special feature: war correspondents at the landing Reports by war correspondents Landing section highlights ‘First to Fall’ A 'duty clear before us' Signaller Silas at Anzac

Digital Collection - NZ You are here: Home > Digital Collection > Wars & conflict Heritage Digital Collection Home The Canterbury Aviation (N.Z.) A brief history by Henry Wigram recounting the beginnings of the Canterbury Aviation Company. The Canterbury (New Zealand) Aviation Co. Details of services and training offered by the company following World War I. Christchurch War Memorial: Bridge of Remembrance The history and symbolic features of the Bridge of Remembrance opened By Viscount Jellicoe of Scapa, on Armistice Day, November 11, 1924. City of Christchurch, N.Z. : peace celebrations Programme of Christchurch peace celebrations, held on 19-21 July 1919 to mark the end of World War I. Cecil Malthus: World War I papers [letters, telegrams, documents] A collection of Malthus letters has been digitised and made available online by Christchurch City Libraries. Diggers’ poems A small collection of poems by returned soldiers published after World War I. Ephemera A selection of public notices. Gallipoli papers H.H. The Kiwi

Anzac Day Collection - Collection This documentary gave NZ viewers, for the first time, a Turkish view of the Gallipoli story. Produced for TVNZ and Turkish TV, it focuses on four young people, two Turks and two New Zealanders, descended from Gallipoli veterans, as they explore the grim reality of their ancestors’ experience. Six Māori Battalion soldiers camped in Italian ruins wait for night to fall. The story of the New Zealand Army's (28th) Māori Battalion, this Tainui Stephens documentary tells the stories of five men who served with the unit. This seminal 1984 documentary tells the stories of the New Zealand soldiers who were part of the identity-defining Gallipoli campaign in World War I. Actor Wi Kuki Kaa plays a Vietnam War veteran who is dislocated by his war experience and homeless. Actor Robyn Malcolm visits the towns of Passchendaele and Ypres in Belgium - near the cemetery where her great uncle, Private George Salmond, is buried, and reflects on his sacrifice on foreign whenua.