10 Most Important Enterprise IT Products of 2010 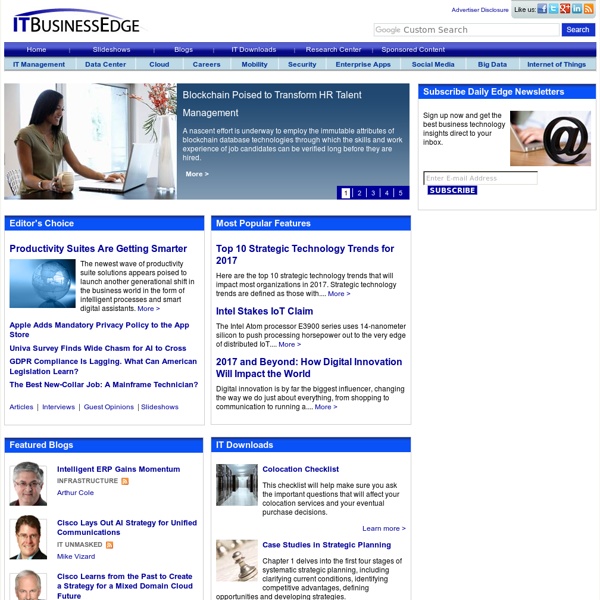 Robert Poe - Will Skype Ever Become a Mainstream Business Tool? Skype Ltd. has been trying to sell itself as a serious business tool since early 2006. It's an ambitious strategy, and it represents a big jump from the company's roots as a pioneer of free Internet calling for individuals. It has also proven to be a much harder sell than expected. At the beginning of its campaign, Skype targeted small and midsized businesses (SMBs). In early 2009 it added Skype for SIP, which made its service accessible through any certified SIP-capable IP PBX. Skype's most recent move came in mid-May, when it introduced an upgraded Web-based administration interface for enterprise IT managers, dubbed Skype Manager. But while all of these developments make Skype increasingly easy for companies large and small to use, the question remains: Will enterprises ever fully accept Skype as a mainstream business tool? There are a number of wholly understandable reasons an enterprise might want to avoid Skype. There are also practical concerns about IT infrastructure.

Saving Money, Space, and Energy With Blade Virtualization - wash In 1986, Attorney Nicholas Barrett founded Nicholas Barrett & Associates with just himself and an assistant running the business. But over the last 24 years, that small two-person office has grown into a bustling 45-person law firm specializing in litigation, real estate law, collections, and loan servicing. Like any busy law office, Nicholas Barrett & Associates is a document-driven business that depends on reliable e-mail and file servers to meet clients' deadlines. Further, the company's infrastructure had become prone to crashes due to single points of failure including switches, hard drives, and RAID controllers. A Simpler Solution Rather than waste the company's time and money overhauling each of the 12 aging servers individually, we opted for a simpler, more streamlined approach. Within the Blade server, we virtualized the 12 existing machines using Citrix XenServer. Disaster Recovery Images of the firm's virtual servers are now kept off-site in secure co-location facilities.

Easy PHP Blackhole Trap with WHOIS Lookup for Bad Bots One of my favorite security measures here at Perishable Press is the site’s virtual Blackhole trap for bad bots. The concept is simple: include a hidden link to a robots.txt-forbidden directory somewhere on your pages. Bots that ignore or disobey your robots rules will crawl the link and fall into the trap, which then performs a WHOIS Lookup and records the event in the blackhole data file. Once added to the blacklist data file, bad bots immediately are denied access to your site. I call it the “one-strike” rule: bots have one chance to follow the robots.txt protocol, check the site’s robots.txt file, and obey its directives. Failure to comply results in immediate banishment. In five easy steps, you can set up your own Blackhole to trap bad bots and protect your site from evil scripts, bandwidth thieves, content scrapers, spammers, and other malicious behavior. The Blackhole is built with PHP, and uses a bit of .htaccess to protect the blackhole directory. Installation Overview

Ripley’s reveal 'Top 10 strangest stories of 2010' We like to think we know a thing or two about weird news, but we're not the only ones. Ripley's Believe It or Not! have revealed their top 10 strange stories of 2010. The firm which publishes books on weirdness and runs odditoriums around the world say they've scoured headlines from 2010 to find the strangest. And it looks like 2010 was a bumper year for oddness with stories including a bearded woman finding her son and our very own spray on clothes and the invention of deep fried beer. Other odd tales making the list include a cat which can predict deaths and a woman bidding to become the world's fattest. Top 10 strangest stories of 2010 Bearded Woman Finds Son: Vivian Wheeler was born with hypertrichosis (werewolf syndrome) and as a hermaphrodite (both male and female reproductive organs) and was told she couldn’t have children. Ripley the Dog: The living, breathing big pile of fur found in a ditch in Houma, La., turned out to be a one-year-old poodle. LINKSRipley's

Google Acquires Email Startup reMail – Founder To Join Gmail 17 February '10, 11:09pm Follow Google has just picked up Y Combinator incubated startup reMail, bringing its talented founder Gabor Cselle on board the Gmail team. reMail was an excellent iPhone application that would download all your email to your phone, making searching your email wildly faster. The application could also save you money if you needed to roam outside of the United States where AT&T rates can be abusive. The application will be pulled (sadly) from the App store. The application retailed, before being removed, for $4.99. At the time of writing, no price is known for the transaction. reMail had raised money not just from Y Combinator but also Paul Buchheit and Sanjeev Singh (Friendfeed co-founders). Gabor Cselle had this to say on the acqusition and his future: While reMail is gone for now, Gmail has just picked up a very capable employee who they intend to use as a product manager. You can read Mr.

The top 10 weird news photographs of 2010 2010 has been a great year for weird news, from a psychic octopus to 7,500 people accidentally selling their souls to a computer game store.But it's some of the odd news images which we will remember the year for, so here are some of our most trafficked photo-based weird news articles of 2010. Amazingly, as they looked for whales, a massive 10 metre one leapt from the water off the coast of South Africa and headed straight for their diminutive yacht. A bizarre service has launched in Switzerland where people can hire an 'Evil Clown' to stalk (and presumably terrify) their friends and family. Dominic Deville says his Evil Clown service has been extremely popular as a birthday 'treat' since he launched it late last year. An airline has decorated one of its planes as an idiot's guide to aviation -- labelling things like the engines and where the pilot sits. A giant Japanese spider crab with limbs more than 5ft (1.5m) long has gone on show in Britian.

Google’s Buzz Draws Scrutiny From Privacy Watchdogs (Update2) - Tech in 2010: Samurai CEO Ellison, Apple's Antennagate and More | John Paczkowski | Digital Daily | AllThingsD According to 2009′s safely-looking-ahead-at-the-year-to-come articles, 2010 was to be “a year of social media convergence.” It was to be a year in which The Cloud “became part of the everyday lexicon of business” and “a year of invention and innovation.” 2010 was to be not just “the year of the tablet,” but also “the year of the smartphone,” “the year of the tweet” and “the year of location.” Above all, 2010 was to be “a year of significant developments” and generally “a busy year for technology.” And I suppose it was that. But for me, 2010 was a year like any of year–one not to be taken too seriously. It may be true, as my colleague Peter Kafka noted earlier this week, that there’s little point in pretending we know what’s going to happen in the year ahead, but the year about to pass remains good for a laugh.

Group Interview: Expert Advice For Students and Young Web Design Advertisement Our readers have requested that Smashing Magazine conduct an interview with industry leaders on issues that are relevant to students and those just starting off in their design career. With the help of our panel of 16 designers, we’ll dispense advice that should help new designers get their career off to a promising start. We’ve asked a few different questions to each of the designers; you’ll see all of their responses below. Henry Jones (Web Design Ledger)Wolfgang Bartelme (Bartelme.at)Chris Coyier (CSS-Tricks)Chris Spooner (SpoonGraphics, Line25)Soh TanakaJon Philips (Spyre Studios)Paul Boag (Boagworld, Headscape)David Leggett (Tutorial9, UX Booth)Jacob Gube (Six Revisions)Elliot Jay StocksBrian Hoff (The Design Cubicle)Darren HoytWalter Apai (Webdesigner Depot)Jacob Cass (Just Creative Design)Zach Dunn (One Mighty Roar and Build Internet)Paul Andrew (Speckyboy Design Magazine) You may be interested in the following related posts: 1. David Leggett Wolfgang Bartelme 2. 3. 4.

A Look at How Mobile, Local and Social Defined Retail in 2010 | Tricia Duryee | eMoney | AllThingsD Three trends accelerated in 2010 that may redefine the way we shop for good: Social, local and mobile. And, in case that’s hard to remember, for short we will refer to it as “so-lo-mo,” like do-re-mi from the “Sound of Music,” except without much “Glee” for retailers. That’s because other than the recession, this past year may represent the biggest challenge for the retail industry since the mid-’90s, when e-commerce was born. Here’s how this daunting, yet exciting and opportunistic, trifecta played out this year: Mobile: There’s definitely an app for that. Result: Retailers watch in horror as shoppers leave their stores empty-handed and drive across town to another store or go online to order a different or cheaper product. Social: Friends and social circles influence purchase decisions through the rise of Facebook and Twitter. Local: Advertising begins shifting to Groupon and LivingSocial, as group discounting and daily deals gain popularity. “There’s still a ton to be done.