The Evolution of Ecological Consciousness (2013) 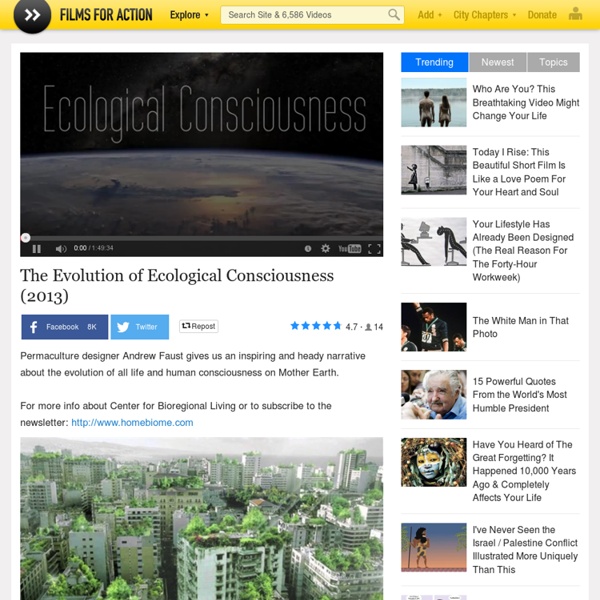 Hundreds Of 5.3 Million Year Old VEHICLE TRACKS Found In Turkey Hundreds of vehicle tracks in bedrock have been found recently in Turkey, the bedrock has been dated to 5.3 million years old. The stone was perhaps soft and mudlike millions of years ago before turning into a hard rock. Who made these tracks, and why are they not publicly discussed by mainstream archeologists? Because they don’t fit the current history of human kind, perhaps?

In Transition 2.0: A Story of Resilience & Hope in Extraordinary Times (2012) This film is an inspirational immersion in the Transition movement, gathering stories from around the world of ordinary people doing extraordinary things. There are stories of communities printing their own money, growing food, localising their economies and setting up community power stations. Transition is an idea that has gone viral, a social experiment that is about responding to uncertain times with solutions and optimism. In a world of increasing uncertainty, here is a story of hope, ingenuity and the power of growing vegetables in unexpected places. It features the following subtitles, all of which have been done by volunteers in their respective countries: Albanian, Croatian, Dutch, Finnish, French, German, Hebrew, Hungarian, Italian, Japanese, Portuguese, Romanian, Slovak, Spanish, Swedish, Turkish. Just click on the 'Captions' button on the video player and you'll find a wide choice of languages available there.

Music in the Brain: Scientists Finally Reveal the Parts of Our Brain That Are Dedicated to Music The late neurologist and writer Oliver Sacks had a big hit back in 2007 with his book Musicophilia: Tales of Music and the Brain, addressing as it did from Sacks’ unquenchably brain- and music-curious perspective a connection almost all of us feel instinctively. We know we love music, and we know that love must have something to do with how our brains work, but for most of human history we haven’t had many credible explanations for what’s going on. But science has discovered more about the relationship between music and the brain, and we’ve posted about some of those fascinating discoveries as they come out. (Have a look at all the related posts below.) But now, a study from MIT’s McGovern Institute for Brain Research has revealed exactly which parts of our brains respond specifically to music. “Why do we have music?”

A Virus Called Fear Very few people understand the programming of fear, and why it distorts our perceptions. While fear is a program used for our survival, fear also creates irrational beliefs that cause larger systems of fear like politics, religion and the media. “A Virus Called Fear” is a short film about the conditioning of fear, and what irrational fears can lead to. A Zaki Gordon Institute for Independent Filmmaking student documentary short. Written and directed by Ben Fama Jr. Are you on “Tsu” yet? This 2016 Resolution for Humanity Will Give You Chills and Light a Fire Under Your Feet For 2016, we need a resolution capable of confronting the crisis we face, and making a future worth fighting for. "A Resolution" looks back on the crisis and confusion of 2015: climate change-driven wildfires, droughts, and storms; ISIS and their attacks in Paris, Beirut, and Ankara; bankrupt political leaders at COP21 debating how fast to kill the world; and an ever growing number of people murdered by police across American cities. As times grow darker, as despair and hopelessness grow in tandem with stupidity and horror, people everywhere are searching for vision and direction. As people worldwide are taking stock, looking backwards to 2015 and forward to 2016, "A Resolution" shows that amidst growing catastrophe, the only real future is the one we’ll make. Woodbine is a hub for building autonomy in the Anthropocene.

Shots of Awe Ever ponder the miracle of life? Or perhaps wonder about the evolution of intelligence? In Shots of Awe, "Performance Philosopher" Jason Silva chases his inspiration addiction as he explores these topics and more. Every week Jason freestyles his way into the complex systems of society, technology and human existence and discusses the truth and beauty of science in a form of existential jazz.

From The Plantation To The Penitentiary (trailer) Slavery is alive and well in America today, even under the nose of the first black US president. Few realize that the US constitution still permits slavery: in prison. This hard-hitting landmark documentary, still in production, focuses on the connection between prisons and slavery, on profiteering in the social justice system of America and the disproportionate impact it has on African Americans communities. With 1 in 20 black people in prison, a proportion that many predict is likely to rise, and more black men currently in prison than ever were enslaved before abolition, how close is America to revealing itself as a slave state again?

Greece to receive 1000 Bitcoin ATMs AnonHQ Economy Bitcoin ATMs could spring up across Greece as soon as October, as citizens and businesses become increasingly desperate to move their money despite capital controls. BTCGreece, which bills itself as the country’s first bitcoin exchange, plans to eventually install 1,000 ATMs nationwide, in partnership with European bitcoin platform, Cubits: “We are creating the ecosystem of bitcoin and blockchain solutions in the Greek market,” BTC Greece founder, Thanos Marinos told CoinTelegraph. “That will include the rollout of 1,000 ATMs and solutions for the e-commerce and tourism industry.

Cultural Jambalaya "Windows & Mirrors: Latin America" DVD Windows & Mirrors: Latin America focuses on captivating people and the traditions, rituals and religions that enrich their fragile cultures. To begin to break down cultural barriers, the DVD asks students to admire and value each other’s similarities as well as our differences. 28 Months on Mars Precision Landing Sol 0·Aug. 6, 2012 The Curiosity rover touches down after an intricate, seven-minute landing sequence. The first images returned from the martian surface show the rover’s shadow stretching toward the bright slopes of Mount Sharp. Central Banks Nervous as Alternative Currency with David Bowie's Face Goes Viral John VibesSeptember 1, 2015 (ANTIMEDIA) Brixton, U.K. — One of the best ways for the general public to take power back is to develop alternative currencies — both local and global — that allow people to trade outside of the corporate-government banking systems and central bank notes. Many people in different areas of the world have been moderately successful at implementing local currencies, such as Mountain Hours or Ithaca Hours, which have gained traction in the U.S.