The Science of Changing Behavior 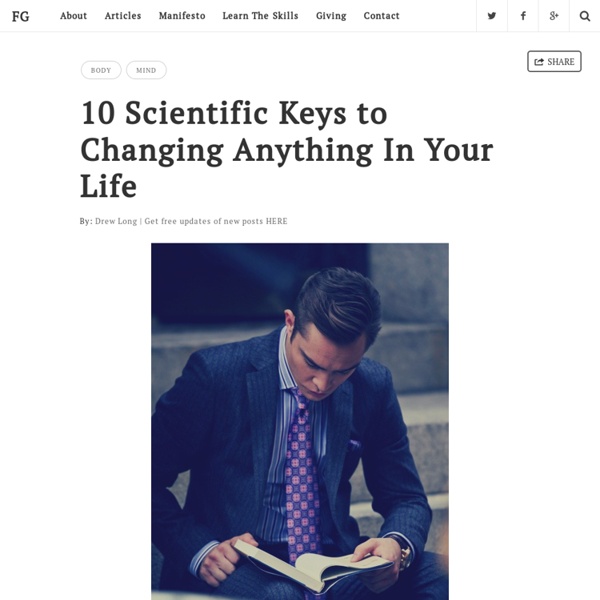 Changing your behavior is hard. Luckily, there is a scientifically proven way to do it that gives you the best chance of success. Anyone who is trying to change their behavior without understanding this science needs to stop, now. Read up on the science. Learn to do it the more effective way. Then, start again, with better strategies, and create the life you’ve always wanted. Here’s the other thing you should know: behavior change is hard. But that’s okay. It just so happens that here at Fierce Gentleman we believe that every man is destined for greatness. So, below we give you the keys to greatness: 10 scientific keys you need to change anything in your life. Of course, information alone does not lead to life change. But never before has so much high-quality, scientifically-validated information been available for free, to anyone, to get their path started: 10 Scientific Keys to Change Any Behavior Willpower is weak. Ready for more? Click here to get the full ebook with 23 principles

Life After College - Advice for 20-Somethings You've probably noticed by now that, in addition to being adorable, Zooey Deschanel is also really, really funny. So, it only makes sense that when she founded HelloGiggles, she enlisted the help of Sophia Rossi and Molly McAleer to create a hub for hilarity. Trust, the musings of HG — like this one authored by Gina Vaynshteyn — will have you laughing out loud. As soon as I graduated college, my life started to gradually shift and evolve, like a Pokémon or perhaps a Gremlin that has belly-flopped into a pool called adulthood.

How I Learned to Stop Procrastinating, & Love Letting Go ‘People have a hard time letting go of their suffering. Out of a fear of the unknown, they prefer suffering that is familiar.’ ~Thich Nhat Hanh By Leo Babauta The end of procrastination is the art of letting go. 37 Secrets Only Successful People Know The business of business isn't really all that complicated. While there is, of course, specific knowledge required for specific industries, this post encapsulates everything that you'll need to know to survive and thrive in the business world. The lists below are adapted and condensed from my recently published book, Business Without the Bullsh*t: 49 Secrets and Shortcuts You Need to Know. 1. How to Become More Optimistic How to Stop Worrying Effective Immediately - HavingTime Worry does not empty tomorrow of its sorrow. It empties today of its strength. – Corrie Ten Boom I’m sure that I’m not the only one who occupies herself with pointless worrying. When I’m in the middle of it, it seems impossible to get a handle of the situation and turn things around. It’s like going downstream in a roaring mountain river in a canoe without a paddle… and the stream of worries just takes you down with no way of stopping.

25 Psychological Life Hacks Social situations are among the most important in our lives. Yet, there is a huge chance that you are oblivious to the plethora of unwritten social rules that structure everybody’s behaviour. Failing to comply to these cultural imprints can cause irreversible damage. Just following them blindly will not get you ahead. Hacking them, however, will give you the best results possible. 6 Things People Who Are Crushing it DO Really Well “I crushed it all day today, and then I crushed it some more, and then it asked me what I was doing and I told it that I was crushing it. That’s what I do on a daily basis, Jess.” – Schmidt, New Girl When someone tells you they’re “crushing it”, have you ever NOT wanted to reply with a slap in the face? Or at least some sort of jugular chop, while taking their cup of coffee. Not to drink it. But just to slowly pour it out on the ground while they helplessly stand there holding their throat.

How the Brain Purges Bad Memories The brain is extraordinarily good at alerting us to threats. Loud noises, noxious smells, approaching predators: they all send electrical impulses buzzing down our sensory neurons, pinging our brain’s fear circuitry and, in some cases, causing us to fight or flee. The brain is also adept at knowing when an initially threatening or startling stimulus turns out to be harmless or resolved. But sometimes this system fails and unpleasant associations stick around, a malfunction thought to be at the root of post-traumatic stress disorder (PTSD). New research has identified a neuronal circuit responsible for the brain’s ability to purge bad memories, findings that could have implications for treating PTSD and other anxiety disorders.

How To Make Friends And Get A Social Life A fairly common social issue people have is that they're not sure how to make friends and put together a social life for themselves. There are quite a few ways someone can find themselves in this situation: They've moved to a new city and don't know very many people yet.They've been in a long-term relationship and have let their social life wither.Their old friends have slowly been dropping out of the picture (moving away, busy with work or a new family, etc.) and haven't been replaced by new ones. A large chunk of their social circle disappeared overnight, like everyone graduated from university and most of their friends moved out of the city.They feel like they've grown apart from their current friends and want to make entirely new ones.In the past they were happy being alone a lot of the time, but now they want to be around people more often.They never really knew how to make friends and have always wished their social lives were better. Below are my thoughts on how to make friends.

How to Build Unstoppable Confidence stumbleupon Article by Jae with contribution by guest contributor Tina Su If you had MASSIVE amounts of confidence in yourself, how would your life be different right now? Millennials Want to Be Coached at Work Imagine showing up to play an important college basketball game on a fabled rival’s home court, only to find you’ve forgotten your shoes. Now consider what to expect from your coach, after losing the game. A royal chewing out for not having your head in the game?

Which Character Strengths Are Most Predictive of Well-Being? - Beautiful Minds - Scientific American Blog Network In 2004, Christopher Peterson and Martin Seligman came out with Character Strengths and Virtues: A Handbook and Classification. This volume was a significant contribution to psychology, a sort of antidote to the DSM's focus on mental illness, and an important reminder to psychologists that humans aren't only full of illness. Humans also have a lot of character. The book laid out the following 24 character strengths: