These 8 Psychological Facts Will Help You Understand A Lot More About Life. #5 Is A Game Changer. 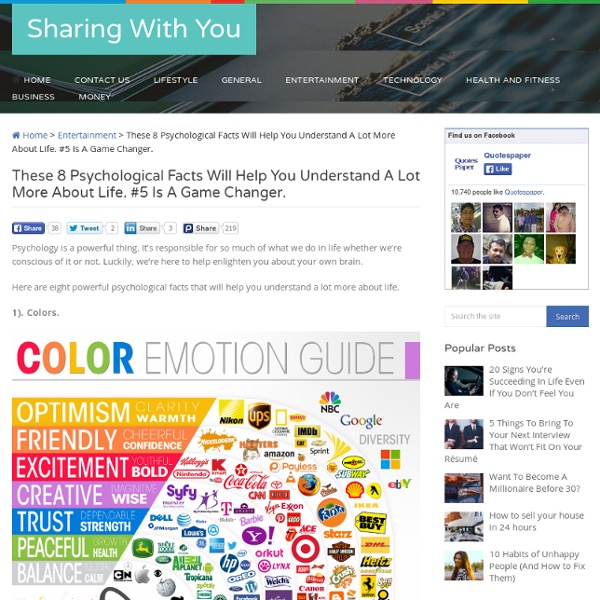 Psychology is a powerful thing. It’s responsible for so much of what we do in life whether we’re conscious of it or not. Luckily, we’re here to help enlighten you about your own brain. Here are eight powerful psychological facts that will help you understand a lot more about life. 1). Colors. Ever wondered why certains brands pick the colors they do for their logos? 2.) When complementing a child it’s better to focus on the hard work they put in to achieve the result rather than praising their intelligence. 3.) Video gamers are better at lucid dreaming than non-gamers. 4.) A pair of watching eyes whether real or not will make us all more honest, according to research from the University of New Castle. On the days when printed eyes were at the top of the price list rather than a picture of flowers the staff paid more for their coffee. 5.) When you’re in an argument be careful using the word “you”. 6.) Need a yes? When you’re asking someone for something make sure you nod your head. 7.) 8.)

The 8 Most Unexpected Advantages of Anxiety Anxiety can be crippling, but psychology studies find it does have some unexpected upsides. Anxiety can be crippling, but sometimes it is a crucial part of getting the best out of yourself. Artists, comedians, athletes and other performers often talk about the right amount of anxiety and how it can improve creativity and performance. But anxiety also has a number of lesser known upsides… 35 Ultimate Psychology Facts - PsychTronics 35 Ultimate Psychology Facts Amazing Psychology facts which you don’t even find in google search. These are psychology facts which are taken from the most experienced and top level psychologists. 1.When it comes to placebo, studies have found that a capsule works better than a tablet, and a syringe works better than a capsule (in terms of how successful the placebo effect is).

25 Acts of Body Language to Avoid Our body language exhibits far more information about how we feel than it is possible to articulate verbally. All of the physical gestures we make are subconsciously interpreted by others. This can work for or against us depending on the kind of body language we use. Some gestures project a very positive message, while others do nothing but set a negative tone. Most people are totally oblivious to their own body language, so the discipline of controlling these gestures can be quite challenging.

How Languages We Speak Affect The Way We Think Keith Chen (TED Talk: Could your language affect your ability to save money?) might be an economist, but he wants to talk about language. For instance, he points out, in Chinese, saying “this is my uncle” is not as straightforward as you might think. In Chinese, you have no choice but to encode more information about said uncle. The language requires that you denote the side the uncle is on, whether he’s related by marriage or birth and, if it’s your father’s brother, whether he’s older or younger. “All of this information is obligatory. 4 Surprising Advantages of Being Depressed Why being depressed can sometimes be necessary, even beneficial. Depression can be an adaptive way of dealing with certain problems in life, such as relationship breakdown and illness, say the authors of a new study. While clinical depression is a serious mental health issue, the researchers argue that by examining how depression might have originally arisen, we can better understand how to treat it. Dr. Paul Andrews, who led the study, published in the journal PLOS ONE, said: “Depression has long been seen as nothing but a problem.We are asking whether it may actually be a natural adaptation that the brain uses to tackle certain problems.We are seeing more evidence that depression can be a necessary and beneficial adaptation to dealing with major, complex issues that defy easy understanding.”

When You Start to Enjoy Being Alone, These 10 Things Will Happen Some people think of “being alone” as a bad thing. It either means you’re anti-social, or unwanted, neither of which are a good position to be in. But actually, being alone isn’t’ necessarily a bad thing, as there are a handful of benefits that emerge once you learn to embrace solitude. 40 Outrageous Facts Most People Don’t Know Once you go down the rabbit hole, you will discover things that most people don’t know. Here are 40 outrageous facts that most people are clueless about. 1. How the Brain Works by Maria Popova From the caves of memory to the castles of deception, by way of naughty neurotransmitters and giddy ganglia. Scientists are only just beginning to understand how the brain works — from what transpires in it while we sleep to how to optimize its memory to what love does to it to how music affects it — and the rest of us fall somewhere on the spectrum between fascinated and confused when it comes to the intricate inner workings of our master-controller. From British indie press Nobrow — who also brought us Freud’s graphic biography, those lovely illustrated chronicles of the Space Race and aviation, as well as Blexbolex’s magnificent No Man’s Land — comes Neurocomic (public library), a graphic novel about how the brain works.