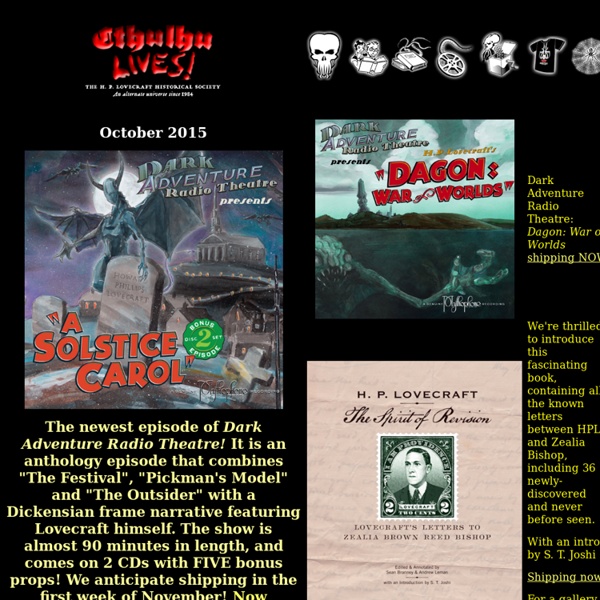 How 1930s Fascism Created Today's Trendiest Self-Defense In May 1940, 500 immigrants, many Jewish, boarded the last boat to escape the rapidly tightening Nazi death-grip on Europe. The ship, Pentcho, started in Bratislava, Slovakia, wended its way down the Danube, was quarantined in Romanian waters — its passengers purposefully brought to the brink of starvation — and at last scratched its way into the Aegean Sea. Then the cursed ship wrecked. Most passengers were interned at a concentration camp in Italy, but a few evaded capture. H. P. Lovecraft Howard Phillips "H. P." Lovecraft (August 20, 1890 – March 15, 1937) was an American author who achieved posthumous fame through his influential works of horror fiction. Virtually unknown and only published in pulp magazines before he died in poverty, he is now regarded as one of the most significant 20th-century authors in his genre. Lovecraft was born in Providence, Rhode Island, where he spent most of his life.

The Pulp Era Miniatures Showcase A time of brave explorers and daring adventurers Miniatures Showcase compiled by the White Knight In the first half of the 20th century, a period henceforth referred to as the Pulp Era, the world was different from today. The Colonial period had not quite ended yet and vast portions of the 4 hemispheres were still uncharted territories. It is in this atmosphere of exploration and discovery that many Western adventurers, historians and archeologists tried their luck and spread out towards the 4 corners of the world. But they were not the only ones and many nations sent out their agents and spies, in hope of gaining a foothold in these newly explored territories or discovering new sources to increases their power.

List of fictional elements, materials, isotopes and atomic particles This list contains chemical elements, materials, isotopes or (sub)atomic particles that exist primarily in works of fiction (usually fantasy or science fiction). No actual periodic elements end in "-ite", though many minerals have names with this suffix. Some of the materials listed as elements below may indeed be minerals, alloys, or other such combinations, but fictional works are often vague on such distinctions. 10 Elaborate Floor Plans from Pre-World War I New York City Apartments By the mid-1800s, most of New York City's upper and middle class still lived in private stand-alone homes while apartment life was a feature of the working and lower class. Inspired by multi-residence buildings that were all the rage in Paris, New York developers began introducing the idea of "French flats" to monied Manhattanites around 1870. The idea caught on, and by the turn of the 20th century, about half of the wealthy city residents had opted for apartment-style living. Eager to attract even more upper class families—especially as laws allowed buildings to grow taller and subways made them more accessible—real estate developers in the first few decades of the 1900s released a series of pamphlets advertising attractive options. The floor plans below are all taken from 1908 and 1910 brochures.

Guardian Druid Tank Macros and Addons (WoW MoP 5.0.5 General Information Macros and addons are an integral part of a raider's arsenal as they can make it easier to perform a variety of tasks, improving your overall game experience. On this page, we present macros and addons that can be useful to a Guardian Druid in World of Warcraft MoP 5.4. The other pages of our Guardian Druid guide can be accessed from the table of contents on the right. About Our Reviewer The Nazi Bell - Was it a wormhole machine? Nazi Germany was working on several top-secret projects during World War II, one in particular has been dubbed as the “Wunderwaffe” or the wonder weapon. The artifact is believed to have had several other names, among them, Nazi-Bell, the Bell and some referred to it as Die Glocke. The device the Nazi were building was supposedly aimed at testing the anti-gravity theories that were very popular at the time, they were hoping to create a “super weapon”. There have been several speculations about what the Bell actually was. It was believed to have been some sort of aircraft with such power that it would have allowed the Nazis to conquer the world. Other theorists believed that the Bell wasn’t an airplane, but a device that could literally open wormholes.

Spade's Desk Lighter in The Maltese Falcon: Ronson Touch Tip [Archive] - The Fedora Lounge View Full Version : Spade's Desk Lighter in The Maltese Falcon: Ronson Touch Tip Andykev Sam Spade had a TOUCH TIP lighter on his desk. Here is a link to one site that shows the many beautiful art deco lighters made by Ronson. A one-of-a-kind marketplace from Steven Soderbergh. - Extension 765 (Note: This posting is for educational purposes only.) I’m assuming the phrase “staging” came out of the theatre world, but it’s equally at home (and useful) in the movie world, since the term (roughly defined) refers to how all the various elements of a given scene or piece are aligned, arranged, and coordinated. In movies the role of editing adds something unique: the opportunity to extend and/or expand a visual (or narrative) idea to the limits of one’s imagination—a crazy idea that works today is tomorrow’s normal.