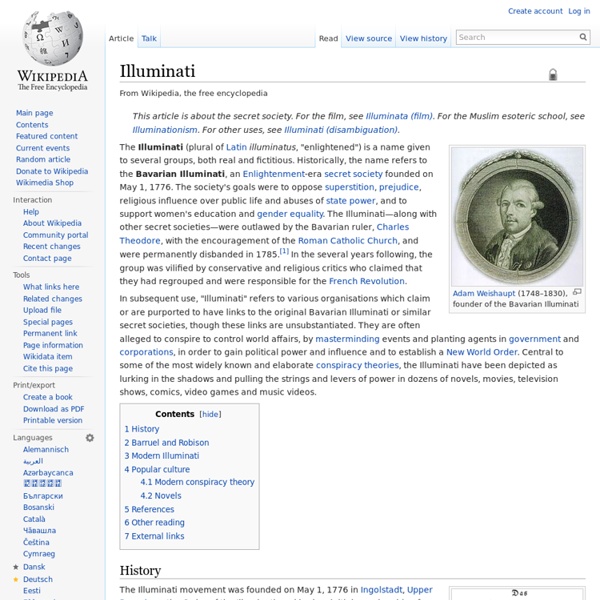 History The Owl of Minerva perched on a book was an emblem used by the Bavarian Illuminati in their "Minerval" degree. The Illuminati movement was founded on May 1, 1776 in Ingolstadt, Upper Bavaria as the Order of the Illuminati, and had an initial membership of five.[2] The founder was the Jesuit-taught Adam Weishaupt (d. 1830),[3] who was the first lay professor of canon law at the University of Ingolstadt.[1] The Order was made up of freethinkers as an offshoot of the Enlightenment and seems to have been modelled on the Freemasons.[4] Illuminati members took a vow of secrecy and pledged obedience to their superiors. Members were divided into three main classes, each with several degrees, and many Illuminati chapters drew membership from existing Masonic lodges. Fundamental changes occurred in the wake of the acceptance of Adolph Freiherr Knigge into the order. In 1777, Karl Theodor became ruler of Bavaria. Barruel and Robison Modern Illuminati Popular culture Modern conspiracy theory

Ordo Templi Orientis Ordo Templi Orientis (O.T.O.) ('Order of the Temple of the East' or 'Order of Oriental Templars') is an international fraternal and religious organization founded at the beginning of the 20th century. English author and occultist Aleister Crowley has become the best-known member of the order. Originally it was intended to be modelled after and associated with European Freemasonry,[1] such as Masonic Templar organizations, but under the leadership of Aleister Crowley, O.T.O. was reorganized around the Law of Thelema as its central religious principle. This Law—expressed as "Do what thou wilt shall be the whole of the Law"[2] and "Love is the law, love under will"[3]—was promulgated in 1904 with the writing of The Book of the Law. Similar to many secret societies, O.T.O. membership is based on an initiatory system with a series of degree ceremonies that use ritual drama to establish fraternal bonds and impart spiritual and philosophical teachings. History[edit] Origins[edit] Structure[edit]

How To Be Emotionally Stable: A Cosmic Melody donating = loving Brain Pickings remains ad-free and takes hundreds of hours a month to research and write, and thousands of dollars to sustain. If you find any joy and value in it, please consider becoming a Member and supporting with a recurring monthly donation of your choosing, between a cup of tea and a good dinner: (If you don't have a PayPal account, no need to sign up for one – you can just use any credit or debit card.) You can also become a one-time patron with a single donation in any amount: labors of love

Ritual A priest elevates the Host during a Catholic Mass, one of the mostly widely performed rituals in the world. A ritual "is a sequence of activities involving gestures, words, and objects, performed in a sequestered place, and performed according to set sequence."[1] Rituals may be prescribed by the traditions of a community, including a religious community. Rituals are characterized by formalism, traditionalism, invariance, rule-governance, sacral symbolism and performance.[2] Rituals of various kinds are a feature of almost all known human societies, past or present. The field of ritual studies has seen a number of conflicting definitions of the term. In psychology, the term ritual is sometimes used in a technical sense for a repetitive behavior systematically used by a person to neutralize or prevent anxiety; it is a symptom of obsessive–compulsive disorder. Etymology[edit] The English word "ritual" derives from the Latin ritualis, "that which pertains to rite (ritus)". Formalism[edit]

How to Dispel Your Illusions by Freeman Dyson Thinking, Fast and Slow by Daniel Kahneman Farrar, Straus and Giroux, 499 pp., $30.00 In 1955, when Daniel Kahneman was twenty-one years old, he was a lieutenant in the Israeli Defense Forces. Kahneman had a bachelor’s degree in psychology and had read a book, Clinical vs. A famous example confirming Meehl’s conclusion is the “Apgar score,” invented by the anesthesiologist Virginia Apgar in 1953 to guide the treatment of newborn babies. Having read the Meehl book, Kahneman knew how to improve the Israeli army interviewing system. Reflecting fifty years later on his experience in the Israeli army, Kahneman remarks in Thinking, Fast and Slow that it was not unusual in those days for young people to be given big responsibilities. Cognitive illusions are the main theme of his book. An episode from my own past is curiously similar to Kahneman’s experience in the Israeli army. System Two is the slow process of forming judgments based on conscious thinking and critical examination of evidence.

Activists Fight Green Projects, Seeing U.N. Plot Jared Soares for The New York Times At a Roanoke County, Va., meeting, dozens opposed the county's paying $1,200 to a nonprofit. They are showing up at planning meetings to denounce bike lanes on public streets and smart meters on home appliances — efforts they equate to a big-government blueprint against individual rights. “Down the road, this data will be used against you,” warned one speaker at a recent Roanoke County, Va., Board of Supervisors meeting who turned out with dozens of people opposed to the county’s paying $1,200 in dues to a nonprofit that consults on sustainability issues. Local officials say they would dismiss such notions except that the growing and often heated protests are having an effect. In Maine, the Tea Party-backed Republican governor canceled a project to ease congestion along the Route 1 corridor after protesters complained it was part of the United Nations plot. Tom DeWeese, the founder of the American Policy Center, a Warrenton, Va. Membership is rising, Mr.

Robert Green Ingersoll Official Website Anemia Anemia is the most common disorder of the blood. The several kinds of anemia are produced by a variety of underlying causes. It can be classified in a variety of ways, based on the morphology of RBCs, underlying etiologic mechanisms, and discernible clinical spectra, to mention a few. The three main classes include excessive blood loss (acutely such as a hemorrhage or chronically through low-volume loss), excessive blood cell destruction (hemolysis) or deficient red blood cell production (ineffective hematopoiesis). Of the two major approaches to diagnosis, the "kinetic" approach involves evaluating production, destruction and loss,[3] and the "morphologic" approach groups anemia by red blood cell size. Signs and symptoms[edit] Main symptoms that may appear in anemia[5] Anemia goes undetected in many people, and symptoms can be minor or vague. Most commonly, people with anemia report feelings of weakness, or fatigue, general malaise, and sometimes poor concentration. Causes[edit]