Why the Myers-Briggs test is totally meaningless 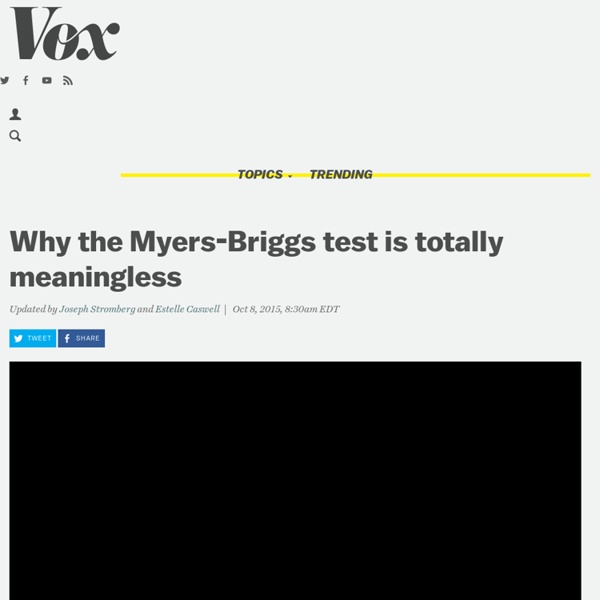 The Myers-Briggs Type Indicator is probably the most widely used personality test in the world. About 2 million people take it annually, at the behest of corporate HR departments, colleges, and even government agencies. The company that produces and markets the test makes around $20 million off it each year. The only problem? The test is completely meaningless. "There's just no evidence behind it," says Adam Grant, an organizational psychologist at the University of Pennsylvania who's written about the shortcomings of the Myers-Briggs previously. Analysis shows the test is totally ineffective at predicting people's success at various jobs The test claims that based on 93 questions, it can group all the people of the world into 16 different discrete "types" — and in doing so, serve as "a powerful framework for building better relationships, driving positive change, harnessing innovation, and achieving excellence." The Myers-Briggs rests on wholly unproven theories Carl Jung in 1960.

The Paradox of Flow It's a Sunday afternoon and I'm on my computer. I've spent and hour sketching things out and now I'm editing the drawings to create a video. The self-doubt that I felt in my first sketchy video is no longer there. I have a clear idea of what I'm doing and I'm having a blast doing it. The Family Relationship That Could Be Most Responsible For Your Emotional Life The ‘corticolimbic system’ plays an important role in mood disorders, such as depression. The brain system governing the emotional response is most heritable from mother to daughter, but less so from mother to son, a new study finds. Fathers, though, are less likely to pass on their emotional brain circuitry to either boys or girls. The corticolimbic system is made up of the amydala, hippocampus, anterior cingulate cortex and ventromedial prefrontal cortex. The research could explain why depression is strongly heritable from mother to daughter. Not that this means mothers are solely responsible for any depression which daughters develop, Dr Fumiko Hoeft explained:

The Alignment System A creature's general moral and personal attitudes are represented by its alignment: lawful good, neutral good, chaotic good, lawful neutral, neutral, chaotic neutral, lawful evil, neutral evil, or chaotic evil. Alignment is a tool for developing your character's identity. It is not a straitjacket for restricting your character. Each alignment represents a broad range of personality types or personal philosophies, so two characters of the same alignment can still be quite different from each other.

The new (and much improved) ‘Bluebook’ caught in the copyright cross-hairs War is brewing over the most boring piece of intellectual property imaginable: the “Bluebook,” the 580-page quasi-authoritative source of proper legal citation formats published by the Harvard Law Review, described by Adam Liptak of the New York Times a few months ago as “a comically elaborate thicket of random and counterintuitive rules about how to cite judicial decisions, law review articles and the like [that] is both grotesque and indispensable.” Today, a group of Yale Law students released a letter supporting #BabyBlue. The letter has almost 120 signatures, and more are being added as I type. It would be very helpful if you could make inquiries at your schools to see if your students would be interested in expressing their views publicly. I don’t presume to know what those views are.

lifehack Whether you look at it in the context of your career, personal life, or dating, first impressions are incredibly important. They set the stage for how people perceive you, which generally translates into how much leverage you’re able to obtain in a given situation. And while first impressions are certainly interesting, do you know what science says about these important social exchanges? Let’s take a look. Personality Types Members Login Log in to your account below: Enter your e-mail address to receive a reset link. Forgot password? theconversation Any adult who has attempted to learn a foreign language can attest to how difficult and confusing it can be. So when a three-year-old growing up in a bilingual household inserts Spanish words into his English sentences, conventional wisdom assumes that he is confusing the two languages. Research shows that this is not the case. In fact, early childhood is the best possible time to learn a second language. Children who experience two languages from birth typically become native speakers of both, while adults often struggle with second language learning and rarely attain native-like fluency. But the question remains: is it confusing for babies to learn two languages simultaneously?

How our sense of smell works as a mysterious sixth s... Noam Sobel can’t stop watching you sniff your hands. In public, he sees people doing it everywhere. Here a man is leaning on one elbow, his palm covering his nose. Color Survey Results Who in the rainbow can draw the line where the violet tint ends and the orange tint begins? Distinctly we see the difference of the colors, but where exactly does the one first blendingly enter into the other? So with sanity and insanity. —Herman Melville, Billy Budd Orange, red? 8 Psych Studies On How Women Can Get Hit On More...Which is Most Obvious? Could these be 8 of the most obvious findings about attraction ever? Women wearing high-heels are more attractive to men than those wearing flats, a recent study has found. Also, the higher the heels, the greater men’s helping behaviour and the more women are hit on. The French research is the first ever to look at the vexed question of how a woman’s high-heels affect the behaviour of men (Guéguen, 2014).

Mental Heuristics Page A heuristic is a "rule-of-thumb", advice that helps an AI program or human think and act more efficiently by directing thinking in an useful direction. Some of these heuristics are age-old wisdom, bordering on cliche, but most are actually helpful. If you want something done, do it yourself Comment: Obviously true, and doing it is usually very good for your self esteem.

Why Don’t Teachers Engage With Research? The Education Endowment Fund (EEF) recently found that teachers do not engage with research. The question is why? The EEF claim that a lack of time and and lack of support from senior leadership are the main culprits. But if we think about it a little that seems like a rather implausible explanation: if research can inform better teaching practice, then the EEF have concluded that teachers aren’t willing to invest the time to make themselves better teachers, and that senior teachers don’t want their more junior colleagues to become better teachers. That sounds absurd. I have met very few people who do not want to improve the way they do things in any job, and I would suggest that teachers, as a group, are more motivated to become better at their jobs than most.