Best places in the U.S. to survive the apocalypse: Silohome 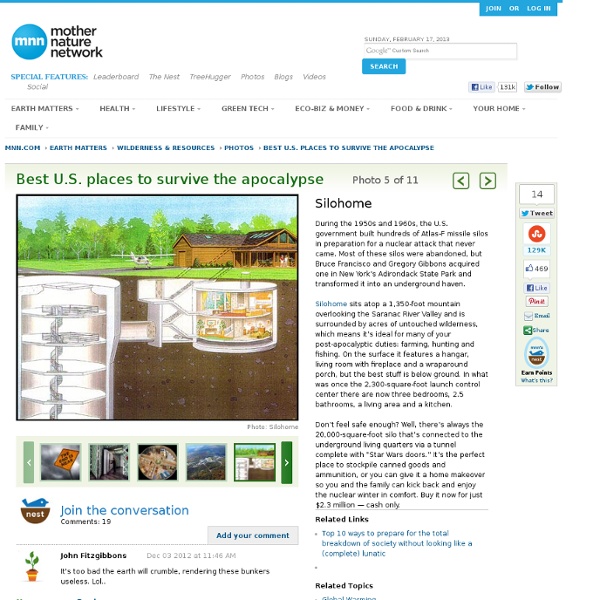 Interested in uplifting stories on the natural world, sustainable communities, simple food, and new thinking on how to live well? Please enter a valid email address and try again! No thanks

Storyboard: How to Survive the Next Disaster | Magazine (Build 20110318052756) Are you ready for the zombie apocalypse?Photo: pasukaru76/Flickr/Creative Commons Disaster will strike: It’s not a matter of if, it’s a matter of when — so you’d better get ready. “Being prepared is a civic duty,” he says. [dewplayer: Best communication device? You can bet Pred knows his stuff. He’s also got a book coming out in June called Show Me How to Survive, an illustrated guide to not dying. If the podcast just isn’t enough for you, check out these links to some of Pred’s favorite disaster-related sites: Plan your go-bag with tips from 72hours.org.Make a safety map to keep in touch with loved ones.Learn all you need to know about ham radio.Calm your radiation paranoia with xkcd‘s radiation dose chart and the banana equivalent dose. Photo: pasukaru76/Flickr

What to Put in a Doomsday (or Disaster) Survival Kit While 2012 is an excuse, there's nothing wrong with being prepared. Just look at Katrina, and the devastation it wrought. My personal wake up call was in 1999 when our city got hit with an October heavy wet snow that basically rendered the entire city without power, sub freezing temps, and obviously no grocery stores open. Everything was liveable after about 72 hours when power was somewhat restored to areas, but our house was without heat for a week. So now, in my pocket, I always carry: -A source of light (4Sevens Quark currently, or a Surefire E1e) -A blade (currently a Leatherman Squirt P4 and Skeletool) -A source of fire (Needs replaced - but a generic magnesium starter) With those three items, you might survive. -72 hours worth of (very) basic food (instant rice and packaged tun) -32oz of Water in a re-usable bottle -More blades and sources of light (all blades are multitools, in this case a Leatherman Surge) -Another cup -5 mylar blankets -Zip ties -Paracord -Tinder

SHTF Blog - a TEOTWAWKI Survival Blog — Are YOU ready? Self-Reliance Texts : Essays: First Series : SELF-RELIANCE from Essays: First Series (1841) Ralph Waldo Emerson "Ne te quaesiveris extra." "Man is his own star; and the soul that can Render an honest and a perfect man, Commands all light, all influence, all fate; Nothing to him falls early or too late. Cast the bantling on the rocks, Suckle him with the she-wolf's teat; Wintered with the hawk and fox, Power and speed be hands and feet. ESSAY II Self-Reliance I read the other day some verses written by an eminent painter which were original and not conventional. There is a time in every man's education when he arrives at the conviction that envy is ignorance; that imitation is suicide; that he must take himself for better, for worse, as his portion; that though the wide universe is full of good, no kernel of nourishing corn can come to him but through his toil bestowed on that plot of ground which is given to him to till. Trust thyself: every heart vibrates to that iron string. But now we are a mob. 1. 2.

Identifying Animal Tracks Identifying animal tracks & sign, as well as interpreting and trailing, are primary skills of the wildlife tracker. Historically, animal tracking skills helped people find food, avoid dangerous predators, and read the stories on the landscape. Wildlife tracking skills continue to be valuable today and are being employed in wildlife research, conservation, and outdoor education. Identifying animal tracks and sign can open up an unseen world, a window into the lives of shy and elusive animals. This section of the online library contains an expanding offering of animal tracking articles, as well as many pictures of animal tracks & sign. You can peruse the articles below and/or sign up to the Alderleaf eNewsletter to get updates on new articles. Wildlife Tracking Articles: How to Identify Deer Tracks from Similar Footprints Illustrations and track characteristics highlighting key features that can be used to identify deer tracks from other hoofed mammals within the same size range.

My Family Survival Plan — Keep Your Loved Ones Safe Real Self Reliance » The Top Battery Operated Items To Keep For An Emergency Bio: This article was written by Mark Solomon, who enjoys writing about financial self-reliance and survivalism. Mark is an outdoorsman who enjoys driving to the mountains, so he’s always on the prowl for the best deals on tires to the best discounts on electronics and gadgets. Battery power has provided many conveniences to our lives, many of which we have taken for granted. Below is a list of the most essential (and some less needed but still pretty damn cool) battery powered items you should keep handy in the case of an emergency. Non-essential but pretty awesome battery powered devices, could do without but would be nice to have: Portable Camping Shower ($25-$50) – If you happen to be nearby a clean water source (such as a river or a lake) and the water lines have been cut off to your home, a portable camping shower is useful when you need to get a stream of flowing water. The Essentials: Flashlight/Battery Powered Candles (Varies, inexpensive) – This is a given. And finally…

Fight Smart Fight Smart! Ancient Chinese Strategies Can Bring Victory In The Sparring Ring. By Stefan Verstappen Originally published in Black Belt Magazine Jan 2000 When martial artists train in sparring the emphasis is usually on how to become stronger and faster than your opponent but there are two drawbacks to relying on this type of training. To improve one's chances of success in any form of combat one would need some advantage other than force alone. The following three strategies come from The Thirty-Six Strategies. Create Something From Nothing Use the same feint twice. This is one of the first strategies fighters learn as they gain experience since it is easy to execute and often quite effective. The typical combo is front snap kick aimed mid-level, followed by a jab and reverse punch. Even if the opponent is able step out of range of the high attack he will almost always raise his hands in reaction to the initial attack leaving his midsection undefended against the follow-up leg attack.