Forget The Wisdom of Crowds; Neurobiologists Reveal The Wisdom Of The Confident 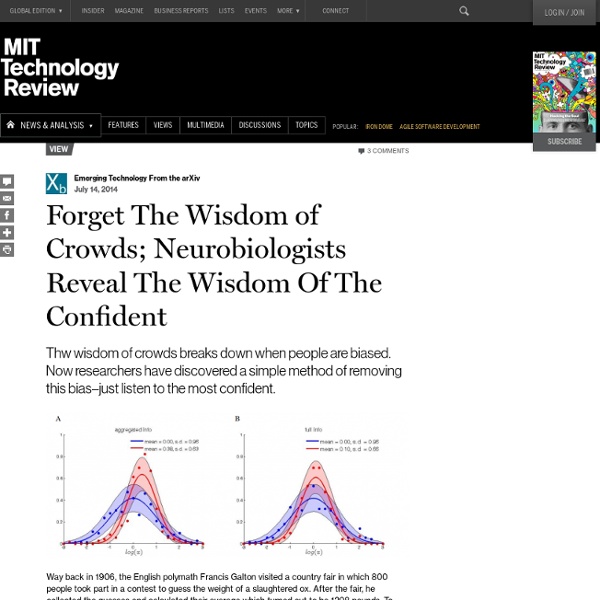 Way back in 1906, the English polymath Francis Galton visited a country fair in which 800 people took part in a contest to guess the weight of a slaughtered ox. After the fair, he collected the guesses and calculated their average which turned out to be 1208 pounds. To Galton’s surprise, this was within 1 per cent of the true weight of 1198 pounds. This is one of the earliest examples of a phenomenon that has come to be known as the wisdom of the crowd. This phenomenon is commonplace today on websites such as Reddit in which users vote on the importance of particular stories and the most popular are given greater prominence. However, anyone familiar with Reddit will know that the collective opinion isn’t always wise. It turns out that if a crowd offers a wide range of independent estimates, then it is more likely to be wise. The theory behind their work is straightforward. So how to identify confident thinkers. Related:  knowledge management

Cynefin for Devs Every now and then, someone comes up with a new way of looking at the world that becomes the next fashionable thing to do. Every time I’ve seen this, there’s usually a space of time in which a lot of people say, “Meh, it’s irrelevant”, or “Meh, consultants”, or “Meh, they’re only in it for the money.” After a while, things settle down and everyone is used to that new model or concept, and it’s no longer seen as edgy or strange. I’d like to shortcut some of that with Cynefin, because I think it’s kind of cool, I’ve found it useful, and it’s not actually that hard to get your head around once you make the small mindshift. Some of us went to the Calm Alpha meet up, created a list afterwards, and have been using it to discuss which kinds of software can be categorised by which domains. So here’s Dave’s Cynefin model. Dave Snowden, released under CC BY 3.0 – thank you! The Cynefin model consists of four domains – simple, complicated, complex and chaotic – with disorder in the middle. Simple

14 Things I’ve Learned About Content Curation In Social Media We recently published a post called “50 Random Things I Have Learned About Social Media Marketing” that quickly became one of our most viewed posts of all time. It was obvious that many people appreciate a clear and concise post that lists actionable items and truths about effective social media marketing. We decided to apply the same principle to a post about content curation. Content curation is something that has been written about quite extensively, however most people still don’t seem to understand what it is and how to be effective with it in social media. Let’s start off by assigning a definition to content curation that is easily understood. As the founder and CEO of Bundle Post, an experienced social media marketer and previously a social media agency founder, I have a lot of time and effort invested in understanding and effectively using social content curation. 1) Knowing your audience and what they’re interested in is imperative. Like this: Like Loading...

How do we transfer knowledge through everyday meeting talk? It's not too often I get the opportunity to help out someone who is doing some really fascinating research into Knowledge Management and conversation. So could anyone help out Lesley Crane please? Lesley is a final year PhD student investigating organizational knowledge work - knowledge transfer and sharing. Her study focuses on how such work is accomplished in everyday meeting talk. She is looking to engage with organizations who would be willing to take part in her study. If you would like to help please get in touch with Lesley via email @ l.crane1@unimail.derby.ac.uk. If this approach intrigues you as it does me then you will find two of her past papers here

Kurt Vonnegut Diagrams the Shape of All Stories in a Master’s Thesis Rejected by U. Chicago “What has been my prettiest contribution to the culture?” asked Kurt Vonnegut in his autobiography Palm Sunday. His answer? His master’s thesis in anthropology for the University of Chicago, “which was rejected because it was so simple and looked like too much fun.” The presenter who introduces Vonnegut's short lecture tells us that “his singular view of the world applies not just to his stories and characters but to some of his theories as well.” Though the design may be a little slick for Vonnegut's unapologetically industrial approach, he'd have appreciated the slightly corny, slightly macabre boilerplate iconography. Related Content: The Shape of A Story: Writing Tips from Kurt Vonnegut Kurt Vonnegut: Where Do I Get My Ideas From? Kurt Vonnegut’s Eight Tips on How to Write a Good Short Story Kurt Vonnegut Reads from Slaughterhouse-Five Josh Jones is a writer and musician based in Durham, NC.

Use PACMAN to beat information overload and fix filter failures! Dealing with information overload (Credits – Joy of Tech) So much information out there! How to keep up with it? Such filter failures (Clay Shirky would -allegedly- say) in the way we process information bubbles! So little time to do so much! People around me are constantly grappling with this: my researcher colleagues say they wouldn’t use new platforms and channels (they’re struggling with existing ones as is), my family wonders how I manage to engage on social media (beyond the obvious Friend&Family-focused Facebook), my friends mostly don’t really know about my info-flow-survival tricks… All of this led me recently to wonder if only dedicated knowledge workers are able to strike a balance with information flow, between fast pace and slow space. My mantra to keep the head above the info water is: PACMAN. What does PACMan entail? One of the main reasons why we don’t manage to find the time to read all the relevant information there is, is that we don’t plan for it properly. So what now?

Accuracy, resilience and denial ... three ways to deal with the future. Accuracy is the most rewarding way to deal with what will happen tomorrow--if you predict correctly. Accuracy rewards those that put all their bets on one possible outcome. The thing is, accuracy requires either a significant investment of time and money, or inside information (or luck, but that's a different game entirely). Resilience is the best strategy for those realistic enough to admit that they can't predict the future with more accuracy than others. And denial, of course, is the strategy of assuming that the future will be just like today. If you enter a winner-take-all competition against many other players, accuracy is generally the only rational play. Of course, and this is the huge of course, most competitions aren't winner take all. Unfortunately, partly due to our fear of losing as well as our mythologizing of the winner-take-all, we often make two mistakes.

Deadly conformity is killing our creativity. Let's mess about more | Henry Porter | Comment is free | The Observer I began to notice the creativity of the manager of the Pret a Manger coffee shop, close to where I live, after he showed extraordinary kindness to a woman with Down's syndrome in her 20s. Well, maybe it wasn't that remarkable, but it was certainly natural and spontaneous and beautifully done. Having been asked by her carer, the woman cleared their tray and tipped the rubbish into the bin. Then she spotted a chocolate energy bar and gave a pleading look to her carer, who shook her head gravely – probably the right decision because she was a little overweight. It was moving and she was evidently delighted, so I took a comment card from the holder on the wall and wrote a note to the CEO of Pret telling him he had a gem on his staff. The company told me that they would give the manager some kind of reward and since then I have taken a secret pleasure at being the unseen agency of a little good fortune. And what has the Pret man got to do with this trend? Play and lack of pressure are vital.

Two Years of Failure The story of the checklist: Anecdote Sometimes the simplest interventions can have the biggest impact. In October 1935, US Army Air Corps brass gathered at an airfield in Dayton, Ohio. They’d come to see two aircraft builders pit their planes against each other in a series of trials, with the best-performed aircraft getting its builder a lucrative contract for new long-range bombers. In theory, the two rivals, Boeing Corporation and Martin & Douglas, had an equal chance of winning the contract. The smaller Martin & Douglas plane just couldn’t compete with Boeing’s bigger, more powerful Model 299. The Model 299, carrying five crew members, made for an impressive sight as it taxied onto the runway and then roared off to rise gracefully into the sky. An investigation found that Major Hill had been preoccupied with the many procedures required to fly the complex new plane, from monitoring the variable oil–fuel mix in each engine to adjusting the pitch of the constant-speed propellers.

KM as market garden or wild garden? One of my favourite sayings is that if knowledge is organic, KM is gardening. And as all gardeners know, gardening is hard work! Even within the topic of gardening, there is a range of approaches, and we can see that also in KM terms when it comes to how we work with communities of practice. There really are two approaches to “community gardening”, which we can call "select and support" and "seed and promote". The first approach sets the conditions for community growth, lets communities emerge spontaneously, and then selects and supports the ones that are felt to be strategic. Its like preparing a flower bed, allowing flowers (weeds) to appear, then thinning out the ones you don’t want and watering the ones you do want. The second approach is to deliberately seed communities on key topics. Each approach has its merits and demerits The "select and support" approach makes use of existing networks and existing energy. But the results will almost certainly, in the long term, be more valuable.

The Usefulness of Useless Knowledge by Maria Popova “The real enemy is the man who tries to mold the human spirit so that it will not dare to spread its wings.” In an age obsessed with practicality, productivity, and efficiency, I frequently worry that we are leaving little room for abstract knowledge and for the kind of curiosity that invites just enough serendipity to allow for the discovery of ideas we didn’t know we were interested in until we are, ideas that we may later transform into new combinations with applications both practical and metaphysical. This concern, it turns out, is hardly new. We hear it said with tiresome iteration that ours is a materialistic age, the main concern of which should be the wider distribution of material goods and worldly opportunities. Mr. Flexner goes on to contend that the work of Hertz and Maxwell is exemplary of the motives underpinning all instances of monumental scientific discovery, bringing to mind Richard Feynman’s timeless wisdom. This lament, alas, is timelier than ever.