Blackest is the new black: Scientists have developed a material so dark that you can't see it... - Science - News 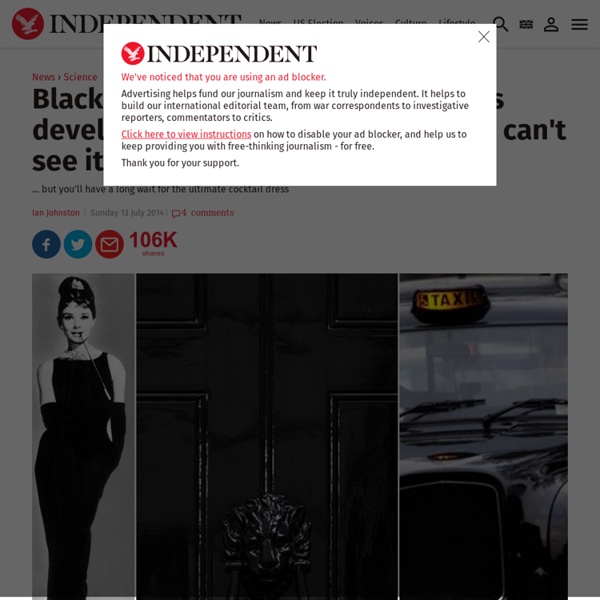 Puritans, Goths, avant-garde artists, hell-raising poets and fashion icon Coco Chanel all saw something special in it. Now black, that most enigmatic of colours, has become even darker and more mysterious. A British company has produced a "strange, alien" material so black that it absorbs all but 0.035 per cent of visual light, setting a new world record. If it was used to make one of Chanel's little black dresses, the wearer's head and limbs might appear to float incorporeally around a dress-shaped hole. Actual applications are more serious, enabling astronomical cameras, telescopes and infrared scanning systems to function more effectively. The nanotube material, named Vantablack, has been grown on sheets of aluminium foil by the Newhaven-based company. "You expect to see the hills and all you can see … it's like black, like a hole, like there's nothing there. A sample of the new material. "You would lose all features of the dress. "Many people think black is the absence of light.

The Most Astonishing Wave-Tracking Experiment Ever : Krulwich Wonders... Claude Monet /The Metropolitan Museum of Art I'm standing on a beach and I see, a few hundred yards out, a mound of water heading right at me. It's not a wave, not yet, but a swollen patch of ocean, like the top of a moving beach ball, what sailors call a "swell." As it gets closer, its bottom hits the rising shore below, forcing the water up, then over, sending it tumbling onto the beach, a tongue of foam coming right up to my toes — and that's when I look down, as the wave melts into the sand and I say, "Hi, I'm from New York. Yes, I'm asking a wave to tell me where it was born. His name is Walter Munk, now in his 90s and a professor emeritus at the Scripps Institution of Oceanography in La Jolla, Calif. His equations said that the swells hitting beaches in Mexico began some 9,000 miles away — somewhere in the southern reaches of the Indian Ocean, near Antarctica. "Could it be?" He decided to find out for himself. Professor Munk was not the first scientist to study swells. ...

Black Holes Feed On Quantum Foam, Says Cosmologist — The Physics arXiv Blog If Spaans is right, black holes grow by feeding on spacetime itself and their quantum feeding habits effectively solve the problem of how the biggest black holes become so massive, so quickly. “Supermassive black holes can acquire a lot of their mass through these quantum contributions over the life time of the universe,” he says. Here’s some useful background. Nobody has ever observed quantum foam but there is widespread agreement that the fabric of the universe must be made of something like it. In ordinary circumstances, quantum foam has little impact. Spaans’ approach is to ask what happens when a black hole meets quantum foam. He says this kind of growth can easily account for the observed size of relatively young supermassive black holes. That’s interesting stuff but new ideas are worth little unless they make experimentally testable predictions and Spaans does not disappoint in this respect. And that ought to be measurable.

AstraZeneca Careers | Pharmaceutical Job Search Why do we have blood types? When my parents informed me that my blood type was A+, I felt a strange sense of pride. If A+ was the top grade in school, then surely A+ was also the most excellent of blood types – a biological mark of distinction. It didn’t take long for me to recognise just how silly that feeling was and tamp it down. But I didn’t learn much more about what it really meant to have type A+ blood. By the time I was an adult, all I really knew was that if I should end up in a hospital in need of blood, the doctors there would need to make sure they transfused me with a suitable type. And yet there remained some nagging questions. In 1900 the Austrian physician Karl Landsteiner first discovered blood types, winning the Nobel Prize in Physiology or Medicine for his research in 1930. “Isn’t it amazing?” My knowledge that I’m type A comes to me thanks to one of the greatest discoveries in the history of medicine. Such calamities gave transfusions a bad reputation for 150 years.

Graphene-based mesh to stop bleeding and disinfect wounds - Graphene Tracker 32 Flares Filament.io 32 Flares × DETROIT, May 10, 2013 (GLOBE NEWSWIRE) — Nano Labs Corp. (OTCQB:CTLE) is pleased to announce today it has developed an innovative hemostatic material which it has filed for provisional patent and is currently presenting to the biomedical industry. The new innovation includes a nano biotechnology hemostatic mesh, which creates a mechanical barrier stopping blood flow in wounds and integrates both physical and chemical protection, and antibacterial properties. The proprietary nano material is made with polyvinyl nanofibers, graphene oxide sheets and plate nanoparticles which combine to produce a water-soluble synthetic polymer which has excellent film forming quality, a high tensile strength and flexibility, and allows for emulsifying of additional biomedical enhancing materials that would otherwise not be able to be blended together. “There have been a number of patented hemostatic materials that are based on the use of nanofibers. Source: Nano Labs

New Type of Star Emerges From Inside Black Holes — The Physics arXiv Blog Black holes have fascinated scientists and the public alike for decades. There is special appeal in the idea that the universe contains regions of space so dense that light itself cannot escape and so extreme that the laws of physics no longer apply. What secrets can these extraordinary objects hide? Today, we get an answer thanks to the work of Carlo Rovelli at the University of Toulon in France, and Francesca Vidotto at Radboud University in the Netherlands. Rovelli and Vidotto call these objects “Planck stars” and say they could solve one of the most important questions in astrophysics. Black holes arise naturally from Einstein’s theory of general relativity which predicts that gravity influences the trajectory of photons moving through space. Astrophysicists have long believed that black holes form when stars a little bigger than the Sun run out of fuel. But this has never been entirely satisfactory. Even worse, many physicists believe black holes slowly evaporate and disappear.