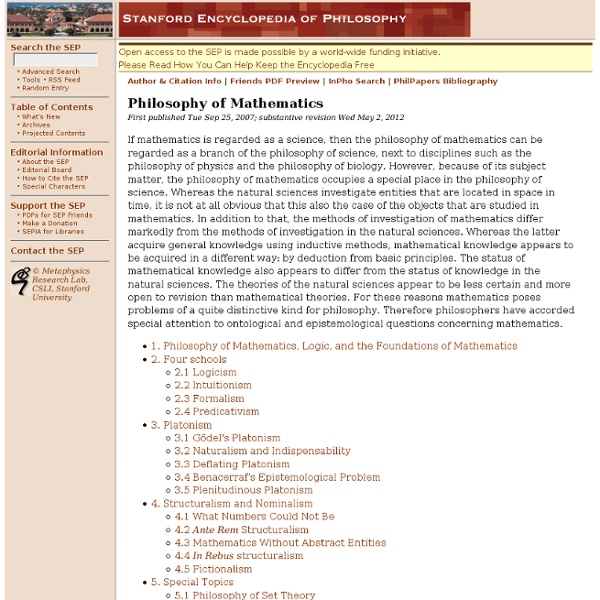 Frege's Theorem and Foundations for Arithmetic 1. The Second-Order Predicate Calculus and Theory of Concepts In this section, we describe the language and logic of the second-order predicate calculus. We then extend this calculus with the classical comprehension principle for concepts and we introduce and explain λ-notation, which allows one to turn open formulas into complex names of concepts. 1.1 The Language The language of the second-order predicate calculus starts with the following lists of simple terms: object names: a, b, …object variables: x, y, …n-place relation names: Pn, Qn, … (n ≥ 1)n-place relation variables: Fn, Gn, … (n ≥ 1) The object names and variables denote, or take values in, a domain of objects and the n-place relation names and variables denote, or take values in, a domain of n-place relations. From these simple terms, one can define the formulas of the language as follows: φ & ψ =df ¬(φ → ¬ψ) φ ∨ ψ =df ¬φ → ψ φ ≡ ψ =df (φ→ψ) & (ψ→φ) ∃αφ =df ¬∀α¬φ If ν1 and ν2 are any object terms, ν1 = ν2 is a formula. to

Aesthetic Judgment First published Fri Feb 28, 2003; substantive revision Thu Jul 22, 2010 Beauty is an important part of our lives. Ugliness too. It is no surprise then that philosophers since antiquity have been interested in our experiences of and judgments about beauty and ugliness. 1. What is a judgment of taste? 1.1 Subjectivity The first necessary condition of a judgment of taste is that it is essentially subjective. This subjectivist thesis would be over-strict if it were interpreted in an “atomistic” fashion, so that some subjective response corresponds to every judgment of taste, and vice versa. However, it is not obvious what to make of the subjectivity of the judgment of taste. Beyond a certain point, this issue cannot be pursued independently of metaphysical issues about realism, for the metaphysics we favor is bound to affect our view of the nature of the pleasure we take in beauty. This is all important as far as it goes, but it is all negative. 1.2 Normativity 1.3 Recasting Normativity 2.

Gottlob Frege First published Thu Sep 14, 1995; substantive revision Mon Oct 22, 2012 Friedrich Ludwig Gottlob Frege (b. 1848, d. 1925) was a German mathematician, logician, and philosopher who worked at the University of Jena. Frege essentially reconceived the discipline of logic by constructing a formal system which, in effect, constituted the first ‘predicate calculus’. In this formal system, Frege developed an analysis of quantified statements and formalized the notion of a ‘proof’ in terms that are still accepted today. Frege then demonstrated that one could use his system to resolve theoretical mathematical statements in terms of simpler logical and mathematical notions. 1. According to the curriculum vitae that the 26-year old Frege filed in 1874 with his Habilitationsschrift, he was born on November 8, 1848 in Wismar, a town then in Mecklenburg-Schwerin but now in Mecklenburg-Vorpommern. Frege never fully recovered from the fatal flaw discovered in the foundations of his Grundgesetze. 2.

Set Theory First published Thu Jul 11, 2002 Set Theory is the mathematical science of the infinite. It studies properties of sets, abstract objects that pervade the whole of modern mathematics. The language of set theory, in its simplicity, is sufficiently universal to formalize all mathematical concepts and thus set theory, along with Predicate Calculus, constitutes the true Foundations of Mathematics. 1. The objects of study of Set Theory are sets. The language of set theory is based on a single fundamental relation, called membership. Basic Set Theory for further discussion. When dealing with sets informally, such operations on sets are self-evident; with the axiomatic approach, it is postulated that such operations can be applied: for instance, one postulates that for any sets A and B, the set {A,B} exists. One of the basic principles of set theory is the existence of an infinite set. for further discussion. The fundamental concept in the theory of infinite sets is the cardinality of a set. 2.

Logicism and Neologicism 1. Historical background Kant had held that both arithmetic and (Euclidean) geometry were synthetic a priori, just as—for him—metaphysics was. Indeed, this was to explain the special status of both mathematics and metaphysics, so that the latter could enjoy the exalted status of the former. We might, indeed, at first suppose that the proposition 7 + 5 = 12 is a merely analytical proposition, and follows by the principle of contradiction from the concept of a sum of 7 and 5. Kant's search for conceptual containments is confined to those that he might be able to find among just the explicit constituents of the proposition concerned, unmediated by any connections with related concepts that do not themselves occur within the proposition. only the general features of succession and iteration in time can guarantee the existence and uniqueness of the sum of 7 and 5 …; only the unboundedness of temporal succession can guarantee the infinity of the number series, and so on ….[4] 1.1 Dedekind ν γ γ′

Definitions First published Thu Apr 10, 2008 Definitions have interested philosophers since ancient times. Plato's early dialogues portray Socrates raising questions about definitions (e.g., in the Euthyphro, “What is piety?”)—questions that seem at once profound and elusive. 1. Ordinary discourse recognizes several different kinds of things as possible objects of definition, and it recognizes several kinds of activity as defining a thing. In philosophy, too, several different kinds of definitions are often in play, and definitions can serve a variety of different functions (e.g., to enhance precision and clarity). 1.1 Real and nominal definitions John Locke distinguished, in his Essay, “real essence” from “nominal essence.” This characterization of the distinction is rough because a zoologist's definition of “tiger” should count as a real definition, even though it may fail to provide “the constitution of the insensible parts” of the tiger. 1.2 Dictionary definitions and ostensive definitions 2.

Cusanus, Nicolaus [Nicolas of Cusa] 1. Biography Nicholas of Cusa (Nikolaus Cryfftz or Krebs in German, then Nicolaus Cusanus in Latin) was born in 1401 in Kues (now Bernkastel-Kues) on the Moselle River between Koblenz and Trier. He was one of four children in a bourgeois family. His father, Johan Cryfftz, was a prosperous merchant who became one of the landed gentry in Trier. The first record we have of Nicholas' early education comes from his study of the liberal arts at University of Heidelburg in 1416–17. In 1425 he entered the service of the archbishop of Trier and, as his secretary, received income from several benefices. Ordained a priest sometime during the 1430s, Nicholas first gained wider notice for his work as a conciliarist at the Council of Basel. Nicholas' most important philosophical works were written in the twenty-four years between the appearance of De docta ignorantia and his death. In 1450 he was named bishop of Brixen in the Tirol. 2. 2.1 Metaphysics and ontology 2.2 The Mind and Human Knowing

Parmenides First published Fri Feb 8, 2008; substantive revision Sun Jun 3, 2012 Parmenides of Elea, active in the earlier part of the 5th c. BCE, authored a difficult metaphysical poem that has earned him a reputation as early Greek philosophy's most profound and challenging thinker. His philosophical stance has typically been understood as at once extremely paradoxical and yet crucial for the broader development of Greek natural philosophy and metaphysics. He has been seen as a metaphysical monist (of one stripe or another) who so challenged the naïve cosmological theories of his predecessors that his major successors among the Presocratics were all driven to develop more sophisticated physical theories in response to his arguments. 1. The dramatic occasion of Plato's dialogue, Parmenides, is a fictionalized visit to Athens by the eminent Parmenides and his younger associate, Zeno, to attend the festival of the Great Panathenaea. 2. 2.1 The Proem 2.2 The Ways of Inquiry 2.3 The Way of Conviction

Zeno of Elea First published Wed Jan 9, 2008; substantive revision Wed Jan 11, 2012 Zeno of Elea, 5th c. B.C.E. thinker, is known exclusively for propounding a number of ingenious paradoxes. 1. The dramatic occasion of Plato's dialogue, Parmenides, is a visit to Athens by the eminent philosopher Parmenides and Zeno, his younger associate, to attend the festival of the Great Panathenaea. Plato's Parmenides depicts Socrates going as a young man to hear Zeno reading from the famous book he has brought to Athens for the first time. Once Socrates had heard it, he asked Zeno to read the first hypothesis of the first argument again, and, after it was read, he said: “What do you mean by this, Zeno? While the later tradition unreliably ascribes other works to Zeno, there is some interesting evidence in the commentary on the Parmenides by the Athenian Neoplatonist Proclus (5th c. 2. 2.1 The Arguments Against Plurality 2.1.1 The Antinomy of Limited and Unlimited 2.1.2 The Antinomy of Large and Small