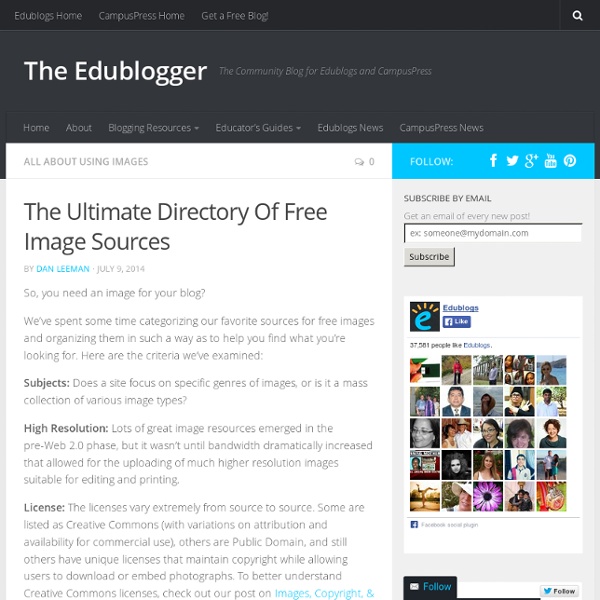 So, you need an image for your blog? We’ve spent some time categorizing our favorite sources for free images and organizing them in such a way as to help you find what you’re looking for. Here are the criteria we’ve examined: Subjects: Does a site focus on specific genres of images, or is it a mass collection of various image types? High Resolution: Lots of great image resources emerged in the pre-Web 2.0 phase, but it wasn’t until bandwidth dramatically increased that allowed for the uploading of much higher resolution images suitable for editing and printing. License: The licenses vary extremely from source to source. Safety: Government sites and many specific subject collections are extremely safe for students to use. Search Engines While these websites do not actually contribute image content themselves, they’re able to index images in a way that makes it easier to search for free content. Category Favorite: Bing Images Bing Images Compfight Creative Commons Search Everystockphoto HiveStock

The Travelling Teachers Are you planning a trip abroad? Do you need English to communicate? Let's revise some vocabulary! For many of us it's time for travelling, some are going abroad and need to revise some vocabulary and expressions... In this post I have just put together some resources about the basic English vocabulary for travelling. The British Library Puts 1,000,000 Images into the Public Domain, Making Them Free to Reuse & Remix Earlier this week, Oxford's Bodleian Library announced that it had digitized a 550 year old copy of the Gutenberg Bible along with a number of other ancient bibles, some of them quite beautiful. Not to be outdone, the British Library came out with its own announcement on Thursday: We have released over a million images onto Flickr Commons for anyone to use, remix and repurpose. These images were taken from the pages of 17th, 18th and 19th century books digitised by Microsoft who then generously gifted the scanned images to us, allowing us to release them back into the Public Domain. The images themselves cover a startling mix of subjects: There are maps, geological diagrams, beautiful illustrations, comical satire, illuminated and decorative letters, colourful illustrations, landscapes, wall-paintings and so much more that even we are not aware of. The librarians behind the project freely admit that they don't exactly have a great handle on the images in the collection.

12 best places to get free images for your site Adding a few high quality photos is a great way to improve a website, article or presentation - but be careful. A search engine like Google Images will quickly locate just about any shot you could ever want, but using them will almost certainly violate someone's copyright. What's more, search tools like TinEye mean there's a very real chance that the original photographer will find out what you've done. #5 Mr. X's Amazing Day (Low) 5 - Mr. X's Amazing Day. This truly is a Canned lesson. About daily routines and basic verbs expressing daily habits. The goal is for students to create a minibook at the end. Colour and show some self expression and "product pride" in their own learning.

Tim Roda’s Hidden Father: A father draws from his past to create images with his family (PHOTOS). Tim Roda, courtesy DanielCooneyFine Art, New York The black-and-white family photos that make up Tim Roda’s series “Hidden Father” were, for the most part, taken with an old Minolta 35mm camera, the same model Roda’s father had used. It might not seem to be an important detail, but it is significant since Roda’s work is often rooted in family history and domestic life coupled with his attraction to more traditional forms of photography, specifically the film negative. Like Roda’s other work, “Hidden Father” explores the role of the father and the son’s relationship within the family. The title of the work is a reference to the “Hidden Mother” portraits of the Victorian age when mothers would disguise themselves as props within the portraits so only their baby would appear in the final image. Roda said that when he was a child his introduction to making art began with his imagination and creating things with whatever happened to be around.

#77 Culturally Specific Content / Teaching ( Int.) I used to teach Adult ESL for the Canadian government. Besides lots of functional language, my curriculum had to also teach about Canada. One of the best/most interesting lessons was to make an acrostic poem about Canada. First, I'd prepare/engage by having the students watch the Canadian anthem video. These are readily available and contain lots of great images of the country.

theconversation Kim Kardashian has made headlines again for a selfie. And this time it’s not in the Daily Mail – no, instead it’s Jonathan Jones, the Guardian’s art critic, whose recent piece celebrates Kardashian and “the power of the nude”. This “selfie would turn Titian on”, gawks the headline. Meanwhile an unpeeled Kim stands pregnant and pouting in the halflight, trapped forever in a smudgy kaleidoscope of sloping lines and smartphone angles, peering into a tiny digital reflection. “Ours is the most misogynistic age in history,” decries Jones: Only in our time does every image of beauty tell women to get thin, thin, thin … Rich, ample, curvy, rampant flesh is, for Rubens, simply and obviously sexy. How you can use TV series, trailers and films in language class How many ways are there to use moving images in the classroom? English language teacher Svetlana Urisman, who won last month’s British Council Teaching English blog award, shares her advice. Comment below this post if you have further tips. Why TV series are sometimes better than films

Originality in photographs according to US Court of Appeals What is original (and is thus protectable) and what is not in a photograph? Questions like these have troubled copyright lawyers (and possibly courts, too) since the invention of photography itself. As this blogger learnt from The Hollywood Reporter, the First Circuit Court of Appeals has just delivered a decision addressing this Hamlet's dilemma, in little more than 6,000 words. The case is Donald A Harney v Sony Pictures Television, Inc, and A&E Television Networks, LLC, a fascinating appeal from the US District Court for the District of Massachusetts with an even more intriguing factual background. Learn English Video – Lesson 02 In this video lesson we will learn some advanced vocabulary. The video was produced by VOA (Voice of English), which has many great lessons and activities for English learners. This video tells us about Nathan Sawaya, a Lego artist! Watch the video carefully, and do the practice.

The Top 100 ‘Pictures of the Day’ for 2012 Dec 11, 2012 After the positive reception from last year’s Top 50 ‘Pictures of the Day’ for 2011, the Sifter promised to highlight the top 25 ‘Pictures of the Day‘ at the end of every quarter, eventually culminating in an epic Top 100 for 2012. That time has come! Below are the top 100 POTDs for 2012. Journeys - Yosemite National Park - What Adams Saw Through His Lens - Travel And then you’re there. Pale, curvaceous granite rocks dance in the skyline. Dozens of people stand along the edge of the pull-off, called Tunnel View, trying to capture the scene. Some snap two quick shots with disposable yellow cameras, and others set up their tripods for hours, watching the light strike Yosemite’s monoliths.