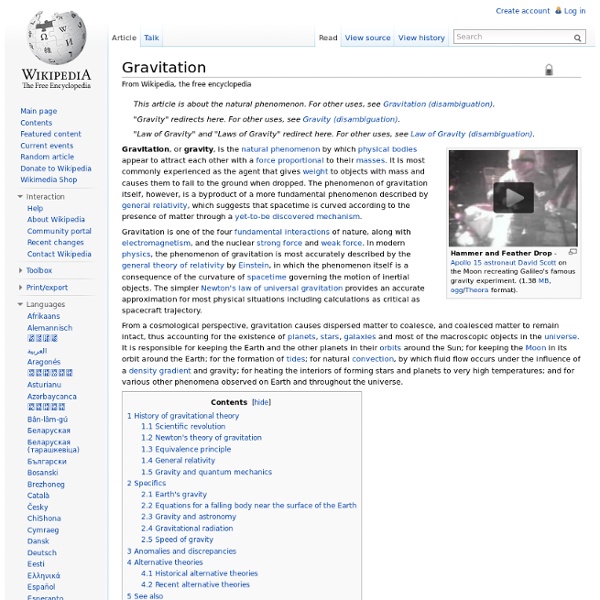 Gravitation, or gravity, is a natural phenomenon by which all physical bodies attract each other. It is most commonly recognized and experienced as the agent that gives weight to physical objects, and causes physical objects to fall toward the ground when dropped from a height. During the grand unification epoch, gravity separated from the electronuclear force. Gravity is the weakest of the four fundamental forces, and appears to have unlimited range (unlike the strong or weak force). The gravitational force is approximately 10-38 times the strength of the strong force (i.e., gravity is 38 orders of magnitude weaker), 10-36 times the strength of the electromagnetic force, and 10-29 times the strength of the weak force. As a consequence, gravity has a negligible influence on the behavior of sub-atomic particles, and plays no role in determining the internal properties of everyday matter. History of gravitational theory Scientific revolution Newton's theory of gravitation General relativity

Figure of the Earth The expression figure of the Earth has various meanings in geodesy according to the way it is used and the precision with which the Earth's size and shape is to be defined. The actual topographic surface is most apparent with its variety of land forms and water areas. This is, in fact, the surface on which actual Earth measurements are made. It is not suitable, however, for exact mathematical computations, because the formulas which would be required to take the irregularities into account would necessitate a prohibitive amount of computations. The topographic surface is generally the concern of topographers and hydrographers.

Einstein for Everyone Einstein for Everyone Nullarbor Press 2007revisions 2008, 2010, 2011, 2012, 2013 Copyright 2007, 2008, 2010, 2011, 2012, 2013 John D. Norton Published by Nullarbor Press, 500 Fifth Avenue, Pittsburgh, Pennsylvania 15260 with offices in Liberty Ave., Pittsburgh, Pennsylvania, 15222 Diamagnetic Gravity Vortexes Diamagnetic Gravity Vortexes by Richard LeFors Clark Waves of gravity pour from an extraordinary (and imaginary) cosmic accident —a head-on collision Universe There are many competing theories about the ultimate fate of the universe. Physicists remain unsure about what, if anything, preceded the Big Bang. Many refuse to speculate, doubting that any information from any such prior state could ever be accessible.

Solar and Terrestrial Radiation Equation (1) Problem Set (#7)Opaque materials transmit no incident radiationTransparent material have little or no absorption and scattering E.g.,clear glass - high transmission, low reflection and absorptionfresh snow - high reflectance, low transmission and absorptionfresh asphalt - high absorption, minimum transmission and reflection Structure of the Earth Structure of the Earth Assumptions[edit] The force exerted by Earth's gravity can be used to calculate its mass, and by estimating the volume of the Earth, its average density can be calculated. Astronomers can also calculate Earth's mass from its orbit and effects on nearby planetary bodies. Structure[edit] Earth's radial density distribution according to the preliminary reference earth model (PREM).[1]

Einstein field equations The Einstein field equations (EFE) or Einstein - Hilbert equations are a set of 10 equations in Albert Einstein's general theory of relativity which describe the fundamental interaction of gravitation as a result of spacetime being curved by matter and energy.[1] First published by Einstein in 1915[2] as a tensor equation, the EFE equate local spacetime curvature (expressed by the Einstein tensor) with the local energy and momentum within that spacetime (expressed by the stress–energy tensor).[3] As well as obeying local energy-momentum conservation, the EFE reduce to Newton's law of gravitation where the gravitational field is weak and velocities are much less than the speed of light.[4] Exact solutions for the EFE can only be found under simplifying assumptions such as symmetry. Special classes of exact solutions are most often studied as they model many gravitational phenomena, such as rotating black holes and the expanding universe.

Cosmos Cosmos is the Universe regarded as an ordered system.[1] The philosopher Pythagoras is regarded as the first person to apply the term cosmos (Greek κόσμος) to the order of the Universe.[2] Cosmology[edit] Cosmology is the study of the cosmos in several of the above meanings, depending on context.

Wormholes I was at a talk the other night listening to a nervous grad student present a paper about knots when, for whatever reason – I was thinking about Michael Heizer – wham!An idea came to me: The eccentric son of a billionaire takes his share of the family fortune and moves to Utah. He buys loads and loads of land, tens of thousands of acres – and, with it, huge digging machines. VY Canis Majoris VY Canis Majoris (VY CMa) is a red hypergiant in the constellation Canis Major. It is one of the largest known stars by radius and also one of the most luminous of its type. It is approximately 1,420 ± 120 solar radii[8] (equal to 6.6 astronomical units, thus a diameter about 1,975,000,000 kilometres (1.227×109 mi)), and about 1.2 kiloparsecs (3,900 light-years) distant from Earth. VY CMa is a single star categorized as a semiregular variable and has an estimated period of 2,000 days.

Earth Earth is the third planet from the Sun. It is the densest and fifth-largest of the eight planets in the Solar System. It is also the largest of the Solar System's four terrestrial planets. It is sometimes referred to as "the World" or the "Blue Planet".[23] Earth formed approximately 4.54 billion years ago, and life appeared on its surface within its first billion years.[24] Earth's biosphere then significantly altered the atmospheric and other basic physical conditions, which enabled the proliferation of organisms as well as the formation of the ozone layer, which together with Earth's magnetic field blocked harmful solar radiation, and permitted formerly ocean-confined life to move safely to land.[25] The physical properties of the Earth, as well as its geological history and orbit, have allowed life to persist.

Friedmann equations and pressure . The equations for negative spatial curvature were given by Friedmann in 1924.[2] Assumptions[edit] Classical element Segment of the macrocosm showing the elemental spheres of terra (earth), aqua (water), aer (air), and ignis (fire). Robert Fludd. 1617. Many philosophies and worldviews have a set of classical elements believed to reflect the simplest essential parts and principles of which anything can consist or upon which the constitution and fundamental powers of everything are based. Most frequently, classical elements refer to ancient concepts which some science writers compare to the modern states of matter, relating earth to the solid state, water to liquid, air to gaseous and fire to plasma.[1][2] Historians trace the evolution of modern theory pertaining to the chemical elements, as well as chemical compounds and mixtures of chemical substances to medieval, and Greek models. Many concepts once thought to be analogous, such as the Chinese Wu Xing, are now understood more figuratively. Ancient[edit]

Stellar classification Spectral type Most stars are currently classified under the Morgan–Keenan (MKK) system using the letters O, B, A, F, G, K, M, L, T and Y a sequence from the hottest (O type) to the coolest (Y type). The types R and N are carbon-based stars, the type S is zirconium-monoxide-based stars. Each letter class is then subdivided using a numeric digit with 0 being hottest and 9 being coolest (e.g. A8, A9, F0, F1) form a sequence from hotter to cooler.