Why so many kids can’t sit still in school today 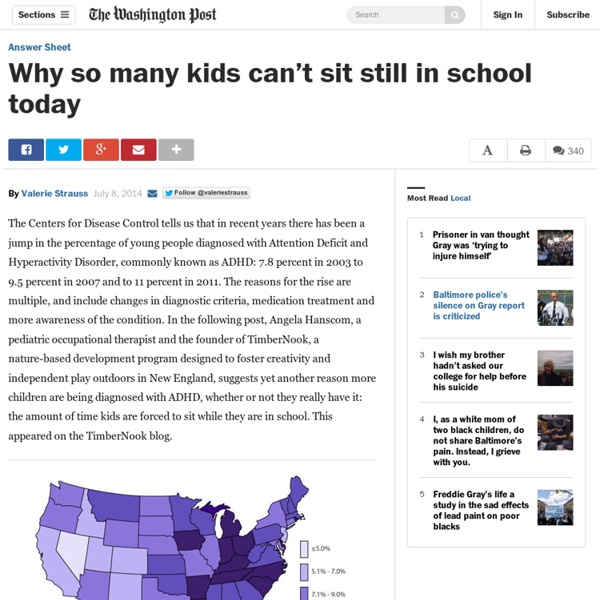 The Centers for Disease Control tells us that in recent years there has been a jump in the percentage of young people diagnosed with Attention Deficit and Hyperactivity Disorder, commonly known as ADHD: 7.8 percent in 2003 to 9.5 percent in 2007 and to 11 percent in 2011. The reasons for the rise are multiple, and include changes in diagnostic criteria, medication treatment and more awareness of the condition. In the following post, Angela Hanscom, a pediatric occupational therapist and the founder of TimberNook, a nature-based development program designed to foster creativity and independent play outdoors in New England, suggests yet another reason more children are being diagnosed with ADHD, whether or not they really have it: the amount of time kids are forced to sit while they are in school. This appeared on the TimberNook blog. State-based Prevalence Data of ADHD Diagnosis (2011-2012): Children CURRENTLY diagnosed with ADHD (Centers for Disease Control) By Angela Hanscom

City ends reserved soccer at Mission Playground after Dropbox flap The San Francisco Recreation and Park Department has decided to end reserved adult play at Mission Playground — the site of a video-recorded confrontation between tech workers and locals that went viral — after meeting with a group of neighborhood kids on Wednesday, according to department director Phil Ginsburg. Ginsburg said park officials met with a combination of kids and youth soccer advocates and came to the conclusion that, in this instance, the need for unstructured play on weekday evenings outweighed the desire to accommodate adults. “The most compelling suggestions came from the kids who said, ‘This is a safe place we can come and play and we feel like we need more time,’” said Ginsburg. “Our first priority is kids.

8 Tips and Tricks to Redesign Your Classroom Editor's Note: Author David Bill is a designer and educator who consulted with The Third Teacher+ on the Remake Your Class project highlighted in the videos below. The tips in this post go along with the companion video. We are excited by the simplicity (and low price tag!) The right — and surprisingly wrong — ways to get kids to sit still in class Robbi Giuliano teaches fifth-graders as they sit on yoga balls at Westtown-Thornbury Elementary School Monday on Feb. 4, 2013, in West Chester, Pa. (AP Photo/Matt Rourke) A post I published in July titled “Why so many kids can’t sit still in school today” seems to have struck a nerve with readers, who continue to read it in big numbers.

School starting age: the evidence In England children now start formal schooling, and the formal teaching of literacy and numeracy at the age of four. A recent letter signed by around 130 early childhood education experts, including myself, published in the Daily Telegraph (11 Sept 2013) advocated an extension of informal, play-based pre-school provision and a delay to the start of formal ‘schooling’ in England from the current effective start until the age of seven (in line with a number of other European countries who currently have higher levels of academic achievement and child well-being). This is a brief review of the relevant research evidence which overwhelmingly supports a later start to formal education. This evidence relates to the contribution of playful experiences to children’s development as learners, and the consequences of starting formal learning at the age of four to five years of age Studies have compared groups of children in New Zealand who started formal literacy lessons at ages 5 and 7.

The Literary United States: A Map of the Best Book for Every State Two weeks ago, we published a literary map of Brooklyn, highlighting the books we felt best represented the neighborhoods in which they were set. Compiling the list of books for that map had us thinking about what it means for a story to not just be from a place, but also of it, and why it is that some places have an abundance of literary riches (we’re looking at you, American South), while others, well, don’t. And we had seen other maps pairing books with states, but those maps tend to signify the fame level of the books rather than their literary merit; they also tend to be dominated by white men, most of them dead. And Margaret Mitchell. What do I do on the FIRST day? Whether you've been teaching 1 year or 20 years, we all ask ourselves the same question leading up to Back to School... At the end of the school year when you have independent little workers, readers, writers, and direction followers...it can be hard (or painful) to remember what it was like waaaay back when, in the beginning of the year, your little honeys could not do ANY of that. I think many of us (or maybe I am speaking for myself here) block it out and forget about what it was like on Day 1, until it's go time! But... your room is ready! Now what?! After many years of tweaking my own first day plans, I have put together this easy-to-use pack of detailed, (and more importantly) realistic lesson plans and activities for the first day of K.

Having a ball in the classroom Students in Robbi Giuliano's fifth-grade class sit on yoga balls as they complete their assignments at Westtown-Thornbury Elementary School in West Chester, Pa. (MATT ROURKE/ASSOCIATED PRESS) By — Kathy Matheson, Associated Press March 12, 2013 Teacher Robbi Giuliano thinks she has found a solution to fidgety fifth-graders: Get rid of traditional desk chairs and have the kids sit on yoga balls. Wait a minute: How could big, bright, rolly balls help kids be less wiggly? Giuliano says the inflatable bouncers have made her students at Pennsylvania’s Westtown-Thornbury Elementary School better able to focus on lessons while improving their balance and core strength. How Finland Keeps Kids Focused Through Free Play - Tim Walker Like a zombie, Sami—one of my fifth graders—lumbered over to me and hissed, “I think I’m going to explode! I’m not used to this schedule.” And I believed him.

The only guide to Gamergate you will ever need to read Anita Sarkeesian, the feminist writer and media critic who has been attacked in “Gamergate.” (Feminist Frequency/Flickr) Gamergate, the freewheeling catastrophe/social movement/misdirected lynchmob that has, since August, trapped wide swaths of the Internet in its clutches, has still — inexplicably! — not burned itself out. Señora Speedy: Whole Brain Teaching - Part One My second year teaching Spanish has already been exponentially better than my first. For one, the students know me better so there is slightly less limit testing than last year. Second, we switched from 55 minutes once every six days to 25 minutes twice every six days.

Does Your Classroom Cultivate Student Resilience? Over 100 years ago, the great African American educator Booker T. Washington spoke about resilience: I have learned that success is to be measured not so much by the position that one has reached in life as by the obstacles overcome while trying to succeed. Research has since established resilience as essential for human thriving, and an ability necessary for the development of healthy, adaptable young people. It's what enables children to emerge from challenging experiences with a positive sense of themselves and their futures.