This Kid Made an App That Exposes Sellout Politicians 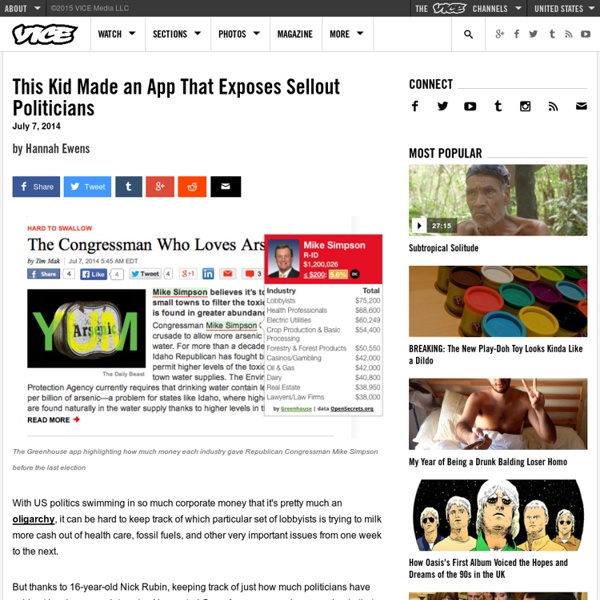 The Greenhouse app highlighting how much money each industry gave Republican Congressman Mike Simpson before the last election With US politics swimming in so much corporate money that it's pretty much an oligarchy, it can be hard to keep track of which particular set of lobbyists is trying to milk more cash out of health care, fossil fuels, and other very important issues from one week to the next. But thanks to 16-year-old Nick Rubin, keeping track of just how much politicians have sold out has become a lot easier. He created Greenhouse, a new browser plug-in that operates under the motto "Some are red. Some are blue. All are green." I spoke to Nick Rubin about the plugin, politics, and what he calls the "money stories" behind what you read in the news. VICE: Hi, Nick. Why the name? Where did you get the information on the politician’s donations? Nick Rubin What are your political views, and how are they relevant to the tool? How does Greenhouse work? What do you hope from Greenhouse?

Related:  e-Democratie • Science and Technology • CITOYEN • Worth a Read/Watch

Groundbreaking Technology Transforms Greenhouse Gases Into Furniture, Phone Cases, and Plastic Bags If there’s a symbol of the environmental destructiveness of our consumer culture, it’s plastic, made from carbon-spewing petroleum products. But what if bags, bottles, and other plastics could help save the environment, not destroy it? What if your laptop computer, smartphone case, and office furniture, rather than emitting planet-warming greenhouse gases, stored them instead? The 21 greatest graduation speeches of the last 50 years Graduation speeches are the last opportunity for a high school or college to educate its students. It's unsurprising, then, that these institutions often pull in some of the world's most powerful people to leave an equally powerful impression on their students. Here are the best of those speeches and some of the sections that resonate the most. David Foster Wallace at Kenyon College, 2005 Jamie Sullivan David Foster Wallace at Kenyon College, 2005“There are these two young fish swimming along and they happen to meet an older fish swimming the other way, who nods at them and says, 'Morning, boys.

Reinventing The Internet With MaidSafe - I Have Bitcoins The rise and rise of Bitcoin has eased society into the idea of a decentralized, unregulated monetary system. But are we ready for a decentralized internet? What looks to be one of the most interesting tech developments since the Bitcoin protocol, with development having started at around about the same time; is a company called MaidSafe. MaidSafe is an acronym for Massive Array of Internet Discs – Secure Access For Everyone. Developed by a chap called David Irvine, this project aims to replace the internet with a more secure, efficient, user-driven alternative. MaidSafe replaces servers with home computers Find Your Passion With These 8 Thought-Provoking Questions In a previous post, I shared questions that can help in overcoming fear of failure. But sometimes, there’s an even more basic problem that can stop us from pursuing bold challenges and ambitious goals: not knowing which challenges or goals to pursue. These days, you're urged to “follow your passions” and “lean in”--but what if you’re not sure where your particular passion lies? What if you don’t know which way to lean? This can be an issue not only for those starting out in a career, but also for some who are established, even highly-successful, yet unfulfilled. It’s easy to find oneself on a path determined by others, or by circumstance (i.e., the job offer or project that comes along unexpectedly and is too good to turn down, then becomes a career).

Out in the Open: An Open Source Website That Gives Voters a Platform to Influence Politicians This is the decade of the protest. The Arab Spring. The Occupy Movement. And now the student demonstrations in Taiwan. Google boss warns of 'forgotten century' with email and photos at risk Piles of digitised material – from blogs, tweets, pictures and videos, to official documents such as court rulings and emails – may be lost forever because the programs needed to view them will become defunct, Google’s vice-president has warned. Humanity’s first steps into the digital world could be lost to future historians, Vint Cerf told the American Association for the Advancement of Science’s annual meeting in San Jose, California, warning that we faced a “forgotten generation, or even a forgotten century” through what he called “bit rot”, where old computer files become useless junk. Cerf called for the development of “digital vellum” to preserve old software and hardware so that out-of-date files could be recovered no matter how old they are. “We don’t want our digital lives to fade away.

The 6 types of Questions your Students Need to Know about Learning is all about asking questions and finding answers to them. An inquisitive mind is one that goes beyond the status quo and probes deep below surface meanings. To foster such kind of thinking inside our classroom requires some hard work and a serious investment in time and efforts. We, as teachers and educators, need to prepare the right environment where inquisitive minds can nourish and grow. We need to water this environment with a culture of asking questions.

New device allows brain to bypass spinal cord, move paralyzed limbs For the first time ever, a paralyzed man can move his fingers and hand with his own thoughts thanks to an innovative partnership between The Ohio State University Wexner Medical Center and Battelle. Ian Burkhart, a 23-year-old quadriplegic from Dublin, Ohio, is the first patient to use Neurobridge, an electronic neural bypass for spinal cord injuries that reconnects the brain directly to muscles, allowing voluntary and functional control of a paralyzed limb. Burkhart is the first of a potential five participants in a clinical study. "It's much like a heart bypass, but instead of bypassing blood, we're actually bypassing electrical signals," said Chad Bouton, research leader at Battelle. "We're taking those signals from the brain, going around the injury, and actually going directly to the muscles." "Initially, it piqued my interested because I like science, and it's pretty interesting," Burkhart said.