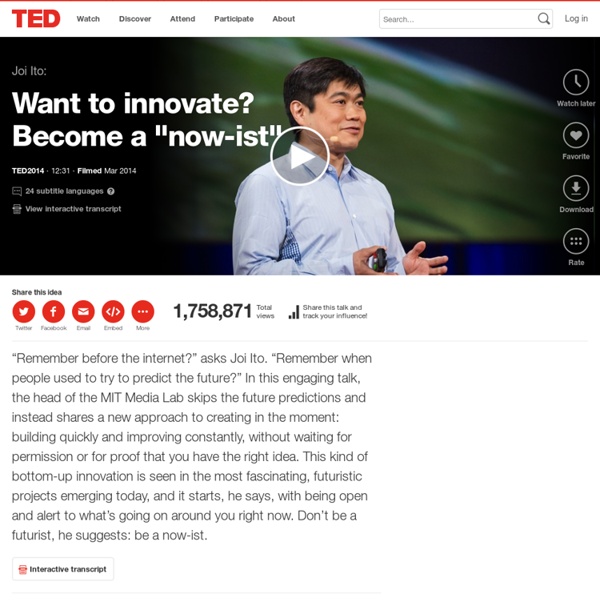 Breakthrough Thinking from Inside the Box Imagine that we asked you to invent an idea for a new business in the next 20 minutes. The task is so broad and vague that you would probably think you couldn’t do it. We have often seen people give up without really trying when confronted with such an amorphous challenge. Instead, let us pose a narrower question: What do Rollerblades, Häagen-Dazs ice cream, and Spider-Man movies have in common? The answer is they are all based on the same business concept. What did we just do, and why did it work? Most managers and professionals are quite capable of thinking effectively inside a box. Ten years ago, as part of a larger project for McKinsey’s strategy practice, we led a team of consultants who developed such an approach to brainstorming. Now that it has been road tested, we’d like to share our approach. Why Brainstorming Doesn’t Work The problem with the first method is that most people are not very good at unstructured, abstract brainstorming.

The Art of Self-Renewal: A Timeless 1964 Field Guide to Keeping Your Company and Your Soul Vibrantly Alive by Maria Popova “The self-renewing man … looks forward to an endless and unpredictable dialogue between his potentialities and the claims of life — not only the claims he encounters but the claims he invents.” In 1964, the prolific social science writer John W. Gardner published Self-Renewal: The Individual and the Innovative Society (public library) — a forgotten book of extraordinary prescience and warm wisdom, which rings even timelier today. It’s a must-read as much for entrepreneurs and leaders seeking to infuse their organizations with ongoing vitality as it is for all of us as individuals, on our private trajectories of self-transcendence and personal growth. Gardner explores what it takes for us — as individuals, as a society, even as a civilization — to cultivate the capacity for self-renewal so vital to countering “the dry rot produced by apathy, by rigidity and by moral emptiness,” which often comes with attaining a certain level of complacent comfort or success. He later adds:

Automatic dependent surveillance-broadcast Automatic dependent surveillance-broadcast (ADS-B) is a cooperative surveillance technology for tracking aircraft. The aircraft determines its own position via GNSS and periodically broadcasts this via a radio frequency. ADS-B is one of the technologies selected as part of the Next Generation Air Transportation System (NextGen)[1] and the Single European Sky ATM Research (SESAR).[2] The United States will require the majority of aircraft operating within its airspace to be equipped with some form of ADS-B by 1 January 2020.[3] In the EU airspace planes with a weight above 5,700 kilograms (12,600 lb) or a max cruise of over 250 knots will be required to carry ADS-B from 2017 (new planes from 2015).[4][5] Description[edit] ADS-B, which consists of two different services, "ADS-B Out" and "ADS-B In", could be replacing radar as the primary surveillance method for controlling aircraft worldwide. Benefits[edit] Safety[edit] Situational awareness Improved visibility Efficiency[edit] ADS-B System

Complexity Thinking How to Get Out of Your Own Way and Unblock the “Spiritual Electricity” of Creative Flow by Maria Popova “No matter what your age or your life path … it is not too late or too egotistical or too selfish or too silly to work on your creativity.” “Art is not a thing — it is a way,” Elbert Hubbard wrote in 1908. But the question of what that way is, where exactly it leads, and how to best follow it is something artists have been grappling with since the dawn of recorded time and psychologists have spent decades trying to decode, outlining the stages of creativity, its essential conditions, and the best technique for producing ideas. In 1978, a few months after she stopped drinking, artist, poet, playwright, novelist, filmmaker, composer, and journalist Julia Cameron began teaching artists — by the broadest possible definition — how to overcome creative block and get back on their feet after a “creative injury.” Art by Sydney Pink from 'Overcoming Creative Block.' Writing in the introduction to the 10th anniversary edition, Cameron adds to the most beautiful definitions of art:

The Mind of the Entrepreneur | One Magazine When Reed Hastings went to return a movie to his local video store in 1997, he met with a rude awakening: a late fee of $40, more than the cost of purchasing the movie itself. What’s worse, he had to pay it before he could rent another movie. Embarrassed and not a little annoyed, he ponied up the cash. But where most of us might have licked our wounds and let it go, he continued to stew over the incident. The head of a struggling software company at the time, Hastings mulled over ideas to make the video rental business better. With just $2 million in startup cash to launch their new DVD-by-mail business, Hastings and a few colleagues started small in San Francisco, working out the kinks as they went. Entrepreneurs are more likely to generalize larger patterns from small, random bits of information. As Hastings’ story—and stories of hundreds of other entrepreneurs—shows, however, nearly all of these myths are just that: myths. Take Hastings. The results were dramatic.

Transition design Transition design is design led societal transition to a more sustainable future. It applies an understanding of the interconnectedness of social, economic, political and natural systems to address problems that exist at all levels of scale in ways that improve quality of life. Such problems can include poverty and economic inequality, biodiversity loss, decline of community, resource depletion, pollution and climate change. Transition design leverages the power of interdependency and symbiosis with the aim of transforming entire lifestyles, making these more convivial and participatory, and harmonising them with the natural environment. Transition designers[edit] Designers assume a similar role in transition design as they do in service design or design for social innovation: the designer is a facilitator of emergent solutions to problems rather than an expert who conceives and delivers blueprints and finished solutions. Cosmopolitan localism[edit] Origin[edit] Initial development[edit]

The Power of Process: What Young Mozart Teaches Us About the Secret of Cultivating Genius by Maria Popova On the “powerful blend of instruction, encouragement, and constant practice.” “The trick to creativity … is to identify your own peculiar talent and then to settle down to work with it for a good long time,” observed Denise Shekerjian in reflecting on her insightful interviews with MacArthur “genius” grantees. “Success is the product of the severest kind of mental and physical application,” attested Thomas Edison. In The Genius in All of Us: New Insights into Genetics, Talent, and IQ (public library), David Shenk presents a rigorously researched blend of historical evidence and scientific data to debunk the myth that genius is a special gift serendipitously bestowed upon the chosen few and shows, instead, that it is the product of consistent, concentrated effort, applied in the direction of one’s natural inclination. Anonymous portrait of the child Mozart, possibly by Pietro Antonio Lorenzoni; painted in 1763 on commission from Leopold Mozart (public domain)

Office of the CTO | Why Financial and Business Knowledge Matters in IT Frank Wegner is a Physicist and IT industry veteran with over 18 years of experience in software development, IT architecture, project management, and consulting, and mentoring. He joined VMware in 2006 as Technical Account Manager helping large customers transforming their IT into a more agile and cost efficient IT service delivery. A key element of this work is to link business needs to IT architectures, and helping customers using advanced concepts like software defined datacenter elements to drive the business value. In this blog I explore ways to make IT more relevant for business. I have spent many years in IT working on lots of customer projects. Why technical KPIs can be dangerous A CTO once wanted to drive his companies’ business forward. When things go the wrong way – coping with 3rd-party providers Other examples of disconnects between business and IT surface when the business circumvents their own companies’ IT offerings. Lower your IT Service costs Achieving cost transparency

Legendary Songwriter Carole King on Inspiration vs. Perspiration and How to Overcome Creative Block by Maria Popova “Once the inspiration comes, that directs where the perspiration goes.” To call Carole King one of the most successful female songwriters of all time, while correct, would be a disservice to the fact that she is one of the most successful, innovative, creatively courageous any songwriters of all time — something her four Grammy Awards and induction into the Rock and Roll Hall of Fame can only begin to reflect. As a songwriter, she has written cultural classics like “(You Make Me Feel Like) A Natural Woman,” popularized by Aretha Franklin, and the contagiously catchy “The Loco-Motion.” In 2013, King became the first woman to receive the Library of Congress Gershwin Prize for Popular Song — and yet the sweeping popularity of her songs has been not a goal but a byproduct of her singular creative vision. That song was as close to pure inspiration as I’ve ever experienced. I almost never have worried about it. Devour some of King’s timelessly enchanting music below:

Start-Up Titles are Dangerous | Tech Entrepreneurship I got a few questions about titles after my last post on hiring. Titles are always tricky, but particularly dangerous in the startup environment. I am not just talking about the rapidly de-valuing titles such as “Founder” (you aren’t one until you have actually created an entity and business), “CEO” (you aren’t one until you actually have responsible for employees and shareholders in a legal entity), and “Entrepreneur” (you aren’t one until you have taken substantial personal risk in the context of a business). It’s the much more pedestrian titles that create equal if not bigger problems (e.g. “Engineer”, “Manager”, “Director”, Vice President”, “CxO”, etc.). Titles become Entitlement Like salary, titles are extremely hard to adjust downward. Titles create Expectations With the exception of the odd walk-in star, most hires start within the company as a vision of a role to be filled. I have made pretty much all of these mistakes at some point or another in the past. Like this:

List of thought processes Nature of thought[edit] Thought (or thinking) can be described as all of the following: An activity taking place in a: brain – organ that serves as the center of the nervous system in all vertebrate and most invertebrate animals (only a few invertebrates such as sponges, jellyfish, adult sea squirts and starfish do not have a brain). Types of thoughts[edit] Content of thoughts[edit] Types of thought (thinking)[edit] Listed below are types of thought, also known as thinking processes. Animal thought[edit] See Animal cognition Human thought[edit] Human thought Classifications of thought[edit] Williams' Taxonomy Creative processes[edit] Creative processes – Decision-making[edit] Decision-making Erroneous thinking[edit] see Error for some examples, see also Human error) Emotional intelligence (emotionally based thinking)[edit] Emotional intelligence – Problem solving[edit] Problem solving Reasoning[edit] Reasoning – Machine thought[edit] Machine thought (outline) Organizational thought[edit] Organizations[edit] Lists