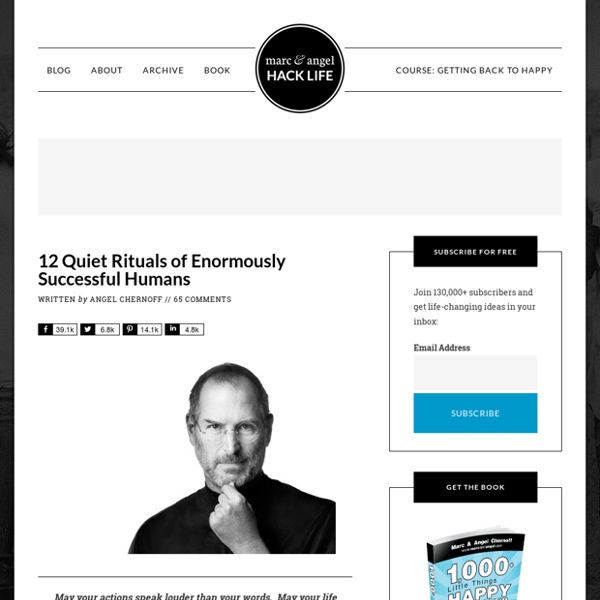 May your actions speak louder than your words. May your life preach louder than your lips. May your success be your noise in the end. The result of enormous success is often pretty noisy – lots of people talking, writing and sharing stories about it. The actual process of achieving enormous success, on the other hand, is far more discreet. But it’s this process that happens quietly, behind-the-scenes, that makes all the difference in the world. Marc and I are fortunate enough to know a number of enormously successful human beings. Building upon our recent video blog post on success, here are twelve things the most successful people we know do quietly and diligently: 1. Too many books and courses on personal success act like we’re robots, and completely overlook the enormous power of our emotions. But when we wake up and stress is already upon us – phones ringing, emails and texts dinging, fire alarms going off – you spend the whole day reacting, instead of being proactive. 2. 3. 4. 5. 6.

10 Rules for Writing About Cops by Joe McKinney « Backspace: The Writers Place Here are some rules that I’ve figured out along the way to help me write about cops. Now I am a cop, so some of these are based on my own experience. Others are based on what I’ve seen work well on the page. The Neuroscience of the Gut People may advise you to listen to your gut instincts: now research suggests that your gut may have more impact on your thoughts than you ever realized. Scientists from the Karolinska Institute in Sweden and the Genome Institute of Singapore led by Sven Pettersson recently reported in the Proceedings of the National Academy of Sciences that normal gut flora, the bacteria that inhabit our intestines, have a significant impact on brain development and subsequent adult behavior. We human beings may think of ourselves as a highly evolved species of conscious individuals, but we are all far less human than most of us appreciate. Scientists have long recognized that the bacterial cells inhabiting our skin and gut outnumber human cells by ten-to-one.

The irrational side of change management Most change programs fail, but the odds of success can be greatly improved by taking into account these counterintuitive insights about how employees interpret their environment and choose to act. In 1996, John Kotter published Leading Change. Considered by many to be the seminal work in the field of change management, Kotter’s research revealed that only 30 percent of change programs succeed. Since the book’s release, literally thousands of books and journal articles have been published on the topic, and courses dedicated to managing change are now part of many major MBA programs. Yet in 2008, a McKinsey survey of 3,199 executives around the world found, as Kotter did, that only one transformation in three succeeds. Other studies over the past ten years reveal remarkably similar results.

5 Ways Movies Get Gunfights Wrong (Based on Experience) Everybody knows action movies are fake, but that doesn't change the fact that they're responsible for approximately 100 percent of our education on the subject of guns and combat. That's why the average person's knowledge of those things is hilariously, sometimes fatally, wrong. To sort out fact from fiction, we interviewed two decorated combat veterans who also have experience working in Hollywood. re:Work - Guide: Understand team effectiveness Much of the work done at Google, and in many organizations, is done collaboratively by teams. The team is the molecular unit where real production happens, where innovative ideas are conceived and tested, and where employees experience most of their work. But it’s also where interpersonal issues, ill-suited skill sets, and unclear group goals can hinder productivity and cause friction. Following the success of Google’s Project Oxygen research where the People Analytics team studied what makes a great manager, Google researchers applied a similar method to discover the secrets of effective teams at Google.

Are You Ignoring The Elephant In The (Change) Room? - Change! - Change Management News & Tips Purging the meeting of the Pesky Pachyderm There’s an elephant lurking in our office. Some say it’s pink and others claim they’ve seen it parading in the corridor wearing a top-hat. What is certain is that this big grey idea invading our comfort zones is very real. In every company there is that topic that, once mentioned, is followed by an uncomfortable silence. When brought up, your team may even develop a sudden interest in whatever happens to be in their laps at the time in order to avoid making eye contact with one another.

W.L. Ripley: How To Create a Series Character - Brash Books W.L. Ripley is the author of two critically-acclaimed series of crime novels — four books featuring ex-professional football player Wyatt Storme and four books about ex-Secret Service agent Cole Springer. His latest novel is Storme Warning, a stunning new mystery/thriller that we’re publishing in February. We will also be re-releasing Ripley’s other books through 2015 and early 2016. Wyatt Storme evolved from a love of mystery characters like Travis McGee, Spenser, and the protagonists of Elmore Leonard’s many novels.

Suggestions for Managing Disruptive Students :Educational Strategies Regardless of whether you're a veteran teacher or just starting down your career path as an educator, it's critical that you constantly improve your classroom management techniques. As you'll come to realize quite quickly, a classroom is an extremely dynamic environment with constantly changing needs. With this in mind, you're bound to experience new challenges posed to your learning environment and teaching style by some of the students in your class. While this can be daunting, developing steadfast, proven methods for dealing with disruptions can help you neutralize problems before they get out of hand. Take a look at these suggestions for managing disruptive students and consider putting them into practice in your own classroom. Acknowledge the Behavior It's natural enough to think that ignoring a given behavior from a disruptive student is a good move, but it isn't going to rectify the situation.