30 Beautiful Doors That Seem To Lead To Other Worlds 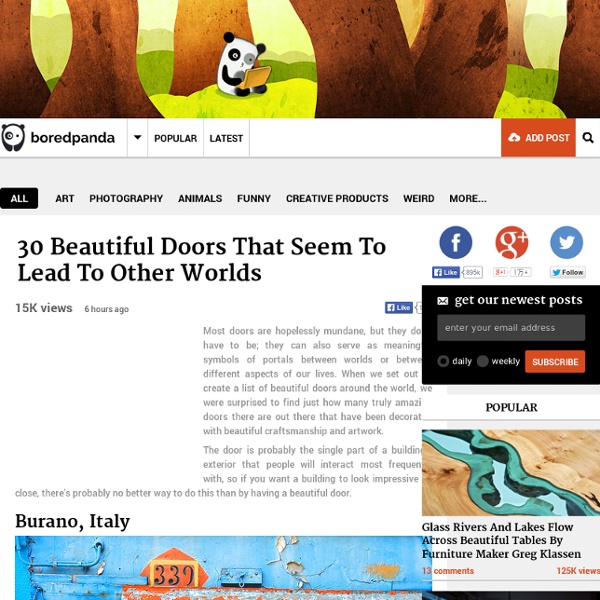 Most doors are hopelessly mundane, but they don’t have to be; they can also serve as meaningful symbols of portals between worlds or between different aspects of our lives. When we set out to create a list of beautiful doors around the world, we were surprised to find just how many truly amazing doors there are out there that have been decorated with beautiful craftsmanship and artwork. The door is probably the single part of a building’s exterior that people will interact most frequently with, so if you want a building to look impressive up close, there’s probably no better way to do this than by having a beautiful door. Burano, Italy Image credits: John C. Hutchins Santa Fe, New Mexico, USA Image credits: Ken Piorkowski Copenhagen, Denmark Image credits: Ingeborg van Leeuwen Valloria, Italy Image credits: socket974 Montmartre, Paris, France Image credits: John Kroll Rabat, Morocco Image credits: David&Bonnie Valparaiso, Chile Image credits: Byron Ellis Garden Door by Kazuyuki Ishihara in Japan

21 Roads to Drive Before you Die There’s nothing like a road trip to really experience a country. From coastal highways and dizzying mountain passes, to scenic routes through national parks and bridges over great spans of water; roads are the circulatory system that connects a country. After an extensive search online, the Sifter has compiled a list of some of the most beautiful, challenging and unforgettable roads in the world. Lego and Gender Issues Article from BBC News Magazine Tom De Castella has written for BBC News Magazine a story about Lego’s moves on gender stereotypes. Three new Lego figures – all female scientists – have been unveiled. But why does the toy maker’s portrayal of women provoke such controversy? A paleontologist, an astronomer, a chemist – into the pantheon of children’s toys stride three new Lego characters. Not so surprising. Except the scientists are all female.

Star Wars: Episode III, redubbed using the English subtitles from a pirated Chinese edition / Boing Boing This is apparently a Chinese pirated edition of Star Wars: Episode III, but dubbed using the English subtitles offered on that disc. It's amazing, not least because the voice actors are so good I thought for a moment it might have been a TV segment with Ewan, Hayden, Samuel and co. [via] The 15 Most Beautiful Flowers In The World Canna Cannas not only feature pretty blossoms, but also beautiful leaves (often likened to that of the banana plant) that come in a variety of stunning colors. Popularized in Victorian times, Cannas are popular garden plants. Cherry Blossom The unofficial flower of Japan, the spectacular display of blossoms that arrive in the spring are celebrated by festivals both in Japan and the U.S. The most popular colors are white and pink.

Tinkers Bubble an Off-Grid community in Somerset, England. The name Tinkers Bubble comes from the spring that flows through the woodland ending in a small waterfall by the road. This is where gypsies brought their horses to water them at the bubble, the gypsy name for waterfall. They manage around 28 acres of douglas fir, larch, and mixed broadleaf woodland using horses, two person saws and a wood-fired steam-powered sawmill. Their pastures, orchards and gardens are organically certified. They press apple juice for sale, grow most of their own vegetables, keep chickens and honey bees selling their produce (jam, chutney, pickles, cider and wine) at local farmers markets. 13 Butt-Clenching Spots to Visit in Europe If you’ve ever felt a touch uneasy wandering through your local cemetery the places featured in this article should provide some much needed perspective. The Catacombs of Palermo, Sicily, Italy About 400 years ago, the monks of the Capuchin monastery in Palermo, Sicily, ran out of space in their cemetery, so decided to excavate the crypts below their church. The first person interred in the newly created catacombs was a monk called Silvestro, who for reasons not entirely clear was mummified. This sparked a tradition and over the next 300 years up to 8,000 people were entombed in a similar manner. Most corpses were dressed in their Sunday best and wired upright against the walls, a position they remain in to this day.

Inshallah - Cullen Murphy Tuning Up - Autumn 2007 Print The war in Iraq might leave us a new word to match a new sense of our own limitations Videos by WatchMojo.com (2 clicks) in: Politics and History, 21st centurySeptember 17, 2015Top 5 Beer Factshosted by Chris MassonBeer is one of the world's oldest and most popular beverages, so of course it stands to reason that it is also one of its most fascinating. Crack open a cold one and join us for this instalment, in which we're looking at the most interesting facts about b PLAY VIDEO

Rain Storm over Tulip Field Random photo Submit your photo Stumble Thru landscape photography, nature photography Tags: field Charming Portable Home With Little to No Maintenance by Kelly Davis Architect Kelly Davis incorporated 21 years of design experience at Midwest resort Canoe Bay as well as inspiration from Frank Lloyd Wright to the immaculate and beautiful design of ESCAPE. Made of all natural materials, ESCAPE is an environmentally sustainable and energy conscious portable home that can be ready for purchase in as little as 90 days. A solution for those who want the freedom to pick up and move, this modern take on simplistic living can be delivered and travel virtually anywhere since it is on wheels.

The world's best secret islands - travel tips and articles Looking for a romantic spot that's (almost) all yours? Here’s a list from our brand new Best in Travel 2011 guide to reignite your love affair with desert islands, with picks from across the globe. 1.