30 Magical Photos Of Children Playing Around The World 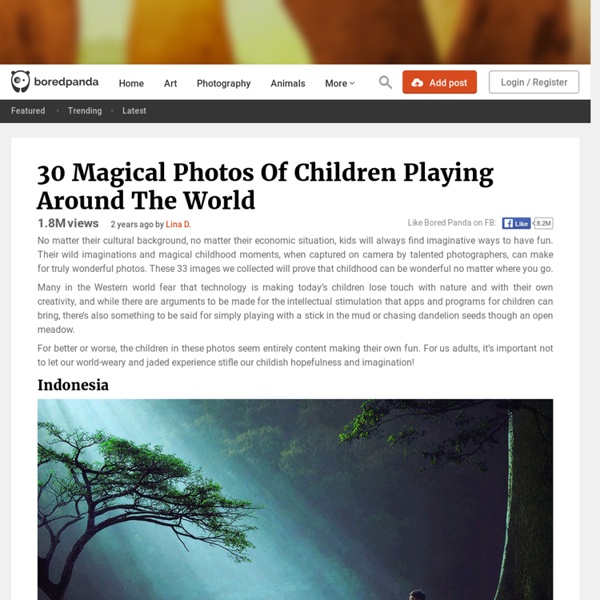 No matter their cultural background, no matter their economic situation, kids will always find imaginative ways to have fun. Their wild imaginations and magical childhood moments, when captured on camera by talented photographers, can make for truly wonderful photos. These 33 images we collected will prove that childhood can be wonderful no matter where you go. Show Full Text Many in the Western world fear that technology is making today’s children lose touch with nature and with their own creativity, and while there are arguments to be made for the intellectual stimulation that apps and programs for children can bring, there’s also something to be said for simply playing with a stick in the mud or chasing dandelion seeds though an open meadow. For better or worse, the children in these photos seem entirely content making their own fun. Indonesia Thanks for sharing! 3x per week 30,000,000+ monthly readers Error sending email Image credits: Ipoenk Graphic Image credits: Agoes Antara Russia Peru

Teaching strategies Global education covers complex and controversial issues. This is a selection of teaching and learning approaches that develop knowledge and skills to respond to global issues. Freedom fighter or terrorist? Passionate or one-eyed? Passive resistance or civil uprising? Illegal arrival or asylum seeker? A Guide to Student-Led Conferences Parent-teacher conferences provide parents with updates on their child’s progress and opportunities to see their student’s work. They also open communication between school and home. However, students often are passive, or even absent, during traditional parent-teacher conferences. One way to fix this is to put students at the helm, as they are the ones who are responsible for their work and progress. Here, we detail a few ways to hold effective student-led conferences and we offer a guide for each conference participant.

25 Of The Most Dangerous And Unusual Journeys To School In The World To the delight (or dismay) of millions, the school season is beginning in many countries throughout the world. But it’s important not to forget that, in some parts of the world, school can be a hard-won luxury. Many children throughout the world have to take the most incredible and unimaginable routes in order to receive the education that some of us may take for granted. 5 Ways to Inspire Students Through Global Collaboration Culture Teaching Strategies Flickr:rwkvisual The Internet has made the world smaller. Teachers can now collaborate with classrooms around the world to expose different culture to students. Two educators listed just a few of the advantages of investing in a globally connected classroom during a recent webinar hosted by EdWeb. Working with students from a different culture motivates students.

Favourite infographic for July: New detailed taxonomy wheel for teachers It was round about this time in March that I reflected on how much time I spend these days digesting information through infographics. I’m a firm believer in their value: while they should not be seen as a replacement for reading, they are a very useful tool when it comes to getting key ideas across quickly and in a visually stimulating way. With this in mind, I decided, starting in March, to post an ‘infographic of the month’.

Where Children Sleep photographs from around the world Photographer James Mollison travelled around the world to capture children's bedrooms The project, Where Children Sleep is set to highlight children's rights across the globeChildren, and their bedrooms, come from all over the world, from China to the U.S. to Brazil By Sara Malm Published: 10:30 GMT, 3 April 2014 | Updated: 14:43 GMT, 3 April 2014 The difference between east and west, rich and poor becomes stark when looking at how our children sleep at night. Where Children Sleep, a project by photographer James Mollison, is set to highlight children’s rights by contrasting the different living situations for young people across the globe. We meet nine-year-old Dong from China who sleeps underneath a poster of Chairman Mao with his parents and sister; Roathy, eight, from Cambodia who lives on a rubbish tip; Kaya, four, from Tokyo, whose mother makes her at least three new dresses a month; and Indira from Nepal who has worked in the local granite quarry since the age of three.

21 Images of Where Children Sleep Around the World Paints a Powerful Picture of Inequality "As a child, that's your little space within the house," said James Mollison, a Kenyan-born, England-raised, Venice-based photographer whose 2011 photo book, Where Children Sleep draws attention to a child's "material and cultural circumstances" and offers a remarkable view on class, poverty, and the diversity of children around the world. After spending more than three years traveling the world from Senegal to Tokyo, Mollison's series include portraits of children in front of a white background accompanied by a single snapshot of their bedrooms, leaving the later to speak volumes about their the social and cultural circumstances that contribute to their lifestyle. "I hope the book gives a a glimpse into the lives some children are living in very diverse situations around the world; a chance to reflect on the inequality that exists, and realize just how lucky most of us in the developed world are," said Mollison. Ryuta is a champion sumo wrestler and has been competing for seven years.

ChicagoNow Do you want to know how I usually start my day? I travel around the world. Thanks to this fantastic group of bloggers from around the world, I can catch real-time images of daily life as it unfolds in countries across the globe – all from the comfort of my own home. One of the most recent photos I posted to Instagram - my "boys" racing through an apple orchard. Differences Between American and British English By Kenneth Beare While there are certainly many more varieties of English, American English and British English are the two varieties that are taught in most ESL/EFL programs. Generally, it is agreed that no one version is "correct" however, there are certainly preferences in use. The three major differences between between American and British English are:

Two Ways to Explore the News Through Maps When teaching students about current events I have always tried to incorporate maps so that students can make a connection to the places that they are reading about. I do this if the story is about something happening in Africa or something happening twenty miles down the road from our community. Newspaper Map and the Breaking News map are both helpful in showing students the connections between story subjects and their corresponding locations. Newspaper Map is a neat tool for locating and reading newspapers from locations all around the world. Newspaper Map claims to have geolocated 10,000 newspapers. To find a newspaper you can browse the map then click on a placemark to open the link within to read a newspaper.

Travel Around the World on Instagram I spent last week and will be spending this upcoming week at blogging conferences. Just like all professions, yes we bloggers do have conventions and conferences. One major topic lately has been the new(er) social media networks of Instagram and Pinterest (yes of course those link to my profiles!), they also happen to be my favorite social networks. Five Fantastic Film sites for ELT Using video in the classroom is a great way to engage learners in the material, either from a topic perspective or with a particular language point. Young learners in particular seem to love the moving image and it can be a great way of providing a change of focus or as a visually supported alternative to a standard listening activity. These sites all do a great job of making film the focus.

State of play: school playgrounds from Kenya to Japan Paso Payita schoolAramasi, Chuquisaca, Bolivia, photographed 9 August 2011 Situated in a remote area on rough terrain 3,000m above sea level, the school has two teachers and 31 students aged from six to 12 years. Many students have to walk several miles to school.