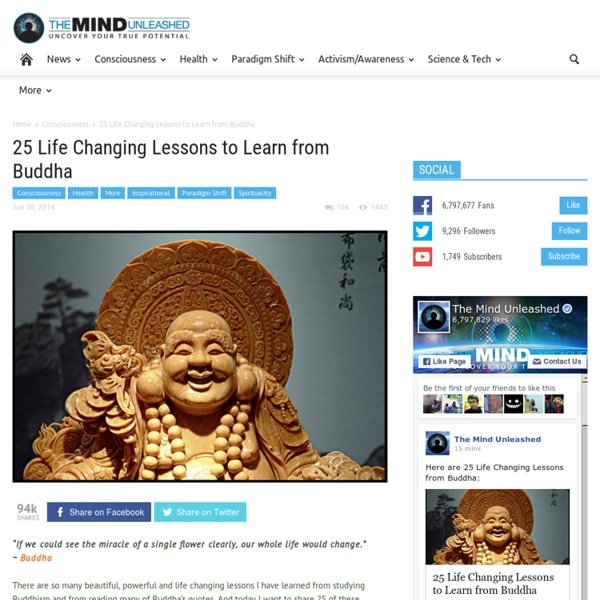 “If we could see the miracle of a single flower clearly, our whole life would change.” ~ Buddha There are so many beautiful, powerful and life changing lessons I have learned from studying Buddhism and from reading many of Buddha’s quotes. And today I want to share 25 of these beautiful lessons with you. Here are 25 Life Changing Lessons from Buddha: 1. “Hatred does not cease by hatred, but only by love; this is the eternal rule.” 2. “A man is not called wise because he talks and talks again; but if he is peaceful, loving and fearless then he is in truth called wise.” “A dog is not considered a good dog because he is a good barker. 3. “Do not dwell in the past, do not dream of the future, concentrate the mind on the present moment.” “The secret of health for both mind and body is not to mourn for the past, nor to worry about the future, but to live the present moment wisely and earnestly.” 4. “The way is not in the sky. 5. “Words have the power to both destroy and heal. 6. 7. 8. 9. 10. 11.

4 bits of Lao Tzu Wisdom that will Change Your Life Ancient Chinese Philosophy is often separated into three categories; Confucianism, Buddhism and Taoism. It is often said that these methods of thought are complementary and can be used to see life from different angles and can be used in different circumstances in life. In Chinese culture there is a saying that says ‘every Chinese man wears a Confucian cap, a Taoist robe, and Buddhist sandals’. The Tao Teh Ching is a collection of insights about life and nature written by the ancient Chinese philosopher Lao Tzu. It is argued which came first, the writings of Confucius or the writings of Lao Tzu. Regardless of when they were written these timeless and often poetic words with shift your perspective and help bring peace into your life. Slow down while reading these ancient insights and see if you can find meaning for them in your present situation. If you want to be able to give and help others, then you must first master being frugal and saving what you do have. Sources-

7 Morning Hacks to Jumpstart Your Day I’ll be the first to admit that I’m really not a morning person. I’ve tried to get myself going in the early hours of the morning, but I’ve always been more of a night owl – my creative juices seem to flow better in the later hours. So I’d be the last person to suggest that you need to force yourself out of bed before your body and mind are really ready to do so. But when you do get up, you may find that you’re pressed for time and have fallen behind the rest of the crowd in what you need to get done during the day. Just because you’re not up as the sun rises doesn’t mean that you can’t put yourself in a position to make sure that the day ahead will be a productive one. On that note, here are 10 “morning hacks” to jumpstart your day: 1. Rather than make your way to the kitchen for that cup of coffee, head to the bathroom and splash some cold water on your face. 2. 3. I keep my alarm clock across the room so that I have to actually get out of bed to turn it off. 4. 5. 6. 7.

12 Ways To Calm The Overactive Mind Have you ever laid in bed trying to sleep while a constant stream of thoughts flow through your mind? Do you perpetually think about random thoughts throughout the day? Law of Attraction According to the Law of Attraction, you will receive whatever is predominantly on your mind. If your mind is producing chaotic, non-random thoughts, then this is what you will attract in your life. Even in the dream world, your predominate thoughts and worries will be reflected. Hijacking the introverted mind We have been indoctrinated into a society that places ego and materialism above everything else, so many people will end up thinking about these things and how they are being perceived by others. It is estimated that approximately 75% of the population are extroverts and virtually all television programming is geared to reinforce the “all-about-me” persona while deterring people to look within for answers, which is they key trait of an introvert. Reinforced irrational thoughts Social anxiety disorders

Charles Bukowski’s Top 10 Tips For Living A Kick-Ass Life Looking for some pointers on how to live an awesome life? Take it from Charles Bukowski, an American author, poet, short story writer, and novelist who shared his unfiltered views and opinions with the world on everything from art to death. He was a renowned and prolific writer, often depicting the experiences of the downtrodden and depraved people of American urban life, and he provided plenty of great tips on how to spend your days. 1. “I wanted the whole world or nothing.” You shouldn’t settle for anything less than what you absolutely deserve or desire. 2. “I never met another man I’d rather be. 3. “What is terrible is not death but the lives people live or don’t live up until their death.” “Some people never go crazy, What truly horrible lives they must live.” Want to go skydiving but have never done it? 4. “You have to die a few times before you can really live.” 5. “It’s better to do a dull thing with style than a dangerous thing without it.” 6. 7. “I carry death in my left pocket.

15 Plants & Herbs That Can Boost Lung Health, Heal Respiratory Infections & R... When it comes to taking herbs for medicinal purposes, it seems the mainstream belief is that they are not as effective and not worth taking. While the effectiveness of herbs has not been studied deeply to determine how well they work across the entire population, the same could be said for most pharmaceutical drugs. Much of the time, pharmaceutical drugs attempt to mimic a compound that occurs in nature (herbs), but often bring the risk of side effects in the process. Safety is one of the most critical areas of review amongst herbs and drugs. According to stats released by the American Association of Poison Control Centers, no deaths have been reported due to the use and consumption of herbs.[4] However, pharmaceutical drugs and physician prescribed medications kill approximately one million Americans each year. While it is important to note that herbal medicines can be lethal in extreme doses, it appears their safety is much greater than that of pharmaceutical drugs. [2] 1. 2. 3. 4. 5.

Creative Problem Solving with SCAMPER SCAMPER is a technique you can use to spark your creativity and help you overcome any challenge you may be facing. In essence, SCAMPER is a general-purpose checklist with idea-spurring questions — which is both easy to use and surprisingly powerful. It was created by Bob Eberle in the early 70s, and it definitely stood the test of time. In this posting, I present a complete SCAMPER primer, along with two free creativity-boosting resources: a downloadable reference mind map and an online tool that generates random questions to get you out of a rut whenever you need. SCAMPER Primer SCAMPER is based on the notion that everything new is a modification of something that already exists. S = SubstituteC = CombineA = AdaptM = MagnifyP = Put to Other UsesE = Eliminate (or Minify)R = Rearrange (or Reverse) To use the SCAMPER technique, first state the problem you’d like to solve or the idea you’d like to develop. Consider, for instance, the problem "How can I increase sales in my business?" Combine

Explosive Dance Portraits By Alexander Yakovlev | Bored Panda Studio-dance photographer Alexander Yakovlev makes his images of professional dancers come alive by adding dynamic elements like exploding flour. The Moscow resident is a graduate from the faculty of law at the Russian State University For the Humanities, but it’s clear from his work here that rhetoric isn’t his only specialty. Yakovlev’s photos span a wide spectrum of dance styles, from ballet to break-dancing, but it was his flour-filled photo “Big bang theory” that has garnered the most recent attention. More info: ayakovlev.com | Facebook | Instagram | 500px (h/t: demilked)