Ultra-rich man's letter: "To My Fellow Filthy Rich Americans: The Pitchforks Are Coming" 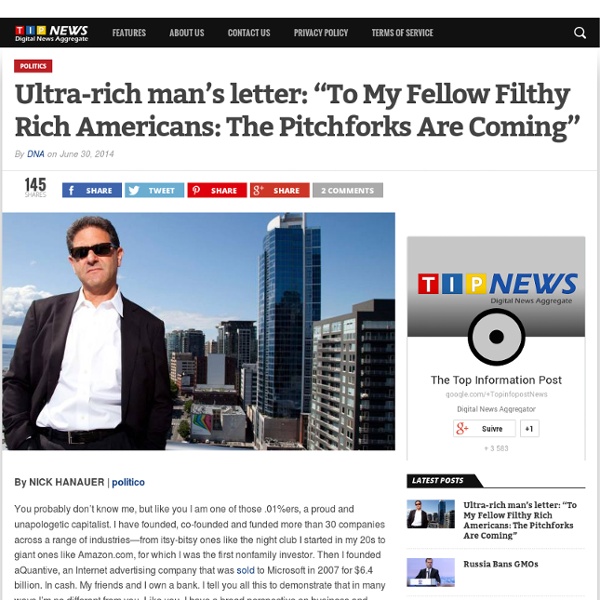 You probably don’t know me, but like you I am one of those .01%ers, a proud and unapologetic capitalist. I have founded, co-founded and funded more than 30 companies across a range of industries—from itsy-bitsy ones like the night club I started in my 20s to giant ones like Amazon.com, for which I was the first nonfamily investor. Then I founded aQuantive, an Internet advertising company that was sold to Microsoft in 2007 for $6.4 billion. In cash. My friends and I own a bank. I tell you all this to demonstrate that in many ways I’m no different from you. Realizing that, seeing over the horizon a little faster than the next guy, was the strategic part of my success. But let’s speak frankly to each other. I see pitchforks. At the same time that people like you and me are thriving beyond the dreams of any plutocrats in history, the rest of the country—the 99.99 percent—is lagging far behind. But the problem isn’t that we have inequality. What a great idea. Because here’s an odd thing. Related:  New Economic system/trends and new paradigms

The Future Is Now: Zapatista Memories of the Future Zapatistas (Photo: aeneastudio / Flickr)The question as to how we can imagine a future that isn't "disposable," where the violence of neoliberal market forces does not reduce life to a mere object in service to the greed of a select few and where violence (both psychic and actual) is no longer the principle force driving how we understand ourselves, has become the principle concern of the left from Slavoj Zizek, Alan Badiou, Peter Hallward and Jodi Dean (among others) looking to new forms of communism in order to (paraphrasing Frederick Jameson) escape from the situation where it is easier to imagine the end of the world than it is to imagine the end of capitalism to the #Accelerationism's attempts to push through capitalism and win back the future. The EZLN seized several towns in the southern Mexican state of Chiapas, including the state's capital, San Cristóbal de las Casas. Reading memory into history gives the Zapatista narration of time a topological character.

Bubble Finance At Work: How The Share Repurchase Mania Is Gutting Growth And Leaving Financial Wrecks Like Radio Shack | David Stockman's Contra Corner Janet Yellen is a chatterbox of numbers, but most of them are “noise”. And that’s her term. Yet here is a profoundly important set of numbers that you haven’t heard boo about from Yellen and her mad money printers. Self-evidently, the corporate form of business organization is designed such that some considerable portion of net earnings should be returned to their owners each year. Needless to say, that is the opposite of the “growth” and “escape velocity” story that currently excites stock market punters, and is wildly inconsistent with present capitalization rates in the stock market. So the $3.8 trillion of dividends and buybacks since Q1 2008 reflects not the natural economics of the market at work, but the artificial regime of monetary central planning and the tax-advantaged treatment of corporate debt. By now this syndrome has become so completely entrenched that the big cap corporate universe functions as an integral component of the Fed’s serial bubble finance cycle.

Inclusive capitalism: searching for a purpose beyond profit | Guardian Sustainable Business It is hard to say if capitalism has ever been less popular than it is this decade. Banker-bashing remains fashionable and politicians vie to decry big business as a way of scoring points. One might be tempted to think that capitalism was hopeless. And maybe the predatory, profit maximising capitalism that was evident in some financial institutions in the mid-2000s is hopeless. But this is not, and has never been, the heart of capitalism – and thinking of it as such is to take a reductive view of capitalism's rich and varied history. These various approaches fall loosely under the banner of inclusive capitalism, which is the idea that those with the power and the means have a responsibility to help make society stronger and more inclusive for those who don't. The City's involvement in philanthropy has a long history stretching all the way back to Dick Whittington and beyond. However, a focus on CSR is not enough in itself. The finance hub is funded by EY.

Marc Andreessen: In 20 years, we’ll talk about Bitcoin like we talk about the Internet today (Joi Ito) The investor and Web browser pioneer Marc Andreessen thinks we'll all look back in 20 years and conclude that Bitcoin was as influential a platform for innovation as the Internet itself was. He says that tech companies think their meetings with President Obama on privacy are a waste of time. And he calls net neutrality a "lose-lose." Is there anything that Washington has built a wall against in terms of progress? Well, the big thing right now for the tech industry is the Snowden revelations, and the consequences of that for the American tech industry. And then, two is this balkanization of the Internet that's happening now. That brings us to, "Okay, how is the American government getting in front of this?" There isn't? No. Those meetings that occurred, that's just for show? Yeah, people come back, and they're like, "Nothing happened." Is there anything tech companies can do, whether on the Snowden stuff, or culturally? Any thoughts on all these mergers that are being announced?

The Economist explains: Thomas Piketty’s “Capital”, summarised in four paragraphs It is the economics book that took the world by storm. Capital in the Twenty-First Century, written by the French economist Thomas Piketty, was published in French in 2013 and in English in March 2014. The English version quickly became an unlikely bestseller, and it prompted a broad and energetic debate on the book’s subject: the outlook for global inequality. Some reckon it heralds or may itself cause a pronounced shift in the focus of economic policy, toward distributional questions. The Economist hailed Professor Piketty as "the modern Marx" (Karl, that is). Capital draws on more than a decade of research by Piketty and a handful of other economists, detailing historical changes in the concentration of income and wealth. From this history, Piketty derives a grand theory of capital and inequality. The book has unsurprisingly attracted plenty of criticism. Update: This blog post has been amended to remove the news peg.

The 4 Transportation Systems You'll Meet in the Future We tend to think of transportation networks as the result of large public works projects—hello, Interstate Highway System—but lately, private hands have been tinkering at the edges of urban mobility. App-based e-hail car services like Uber and Lyft are disrupting traditional city taxi programs. Smartphones are changing the way we wait for and pay for public transportation. It's time to get the public sector talking again, says Anthony Townsend of New York University's Rudin Center for Transportation Policy & Management. "Really, what we're trying to do is provoke a far-ranging discussion that's much less one-dimensional than the kinds of futures we're hearing coming out of a lot of these companies trying to disrupt the marketplace," says Townsend. Re-Programming Mobility conceives four fictional-but-fact-based urban-mobility scenarios set in roughly 2030. The whole report worth a read, but brief summaries of each scenario will follow here. Atlanta, 2028 Los Angeles, 2030 New Jersey, 2029

Africa’s Tech Edge How the continent's many obstacles, from widespread poverty to failed states, allowed African entrepreneurs to beat the West at reinventing money for the mobile age Mike McQuade It’s a painfully First World problem: Splitting dinner with friends, we do the dance of the seven credit cards. No one, it seems, carries cash anymore, so we blunder through the inconvenience that comes with our dependence on plastic. Just as often, I encounter a street vendor or taxi driver who can’t handle my proffered card and am left shaking out my pockets and purse. When I returned to the United States after living in Nairobi on and off for two years, these antiquated payment ordeals were especially frustrating. Every few weeks, I’d pull cash out of my American bank account and hand it to a contemplative young man stationed outside my local greengrocer. Africa’s lack of infrastructure investment during the 20th century created all sorts of vacuums to be filled by the 21st-century digital economy.