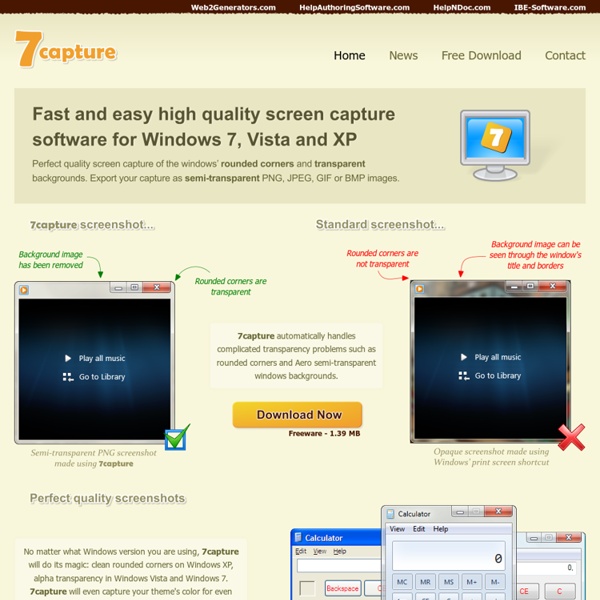 The gzip home page Realtime screen recording and compression for your Mac: iShowU | shinywhitebox - great software for mac Where did the old apps go? iShowU, iShowU HD/HD Pro and Stomp were retired early 2018. Looking back over the old ‘family' album, iShowU was born in 2006 and it developed quickly over the next year. After that came Stomp and then iShowU HD. These were my first “real” products on the Mac. It was an amazing time. They’re now like some of our dear grandparents: showing some weird quirks (when on modern mac’s), and becoming increasingly difficult to keep up to date. the new apps are ready to rock! Not sure which to choose? iShowU Instant The closest match to iShowU and iShowU HD. iShowU Instant + Advanced Features The closest match to iShowU HD Pro. iShowU Studio 2 A different kind of app to the previous (none of the previous apps let you edit). Thank you for using our products and I hope I have provided enough detail below to help you make a decision!

rpm - Trac RecordMyDesktop Full Software Downloads - Download For All Group : Screenflick - Fast Screen Recording for Mac OS X I don't have Mac OS X 10.6 or later. Can I still buy Screenflick 1.6? Sure. Although 1.6 is no longer under development, if you need Screenflick 1.6 to run on Tiger (10.4) or Leopard (10.5), you can find the download link at the bottom of this page. Try it out and make sure it does what you need it to do. To purchase a license for it, go ahead and buy Screenflick 2 and then email us to retrieve your license for 1.6. Why is the video dark when I record a game like "Amnesia"? It's darker because the gamma alters the display's gamma. Why do I see a white and grey checkerboard when recording DVDs? This is OS X's DRM at work. Why isn't audio from this application being recorded? When you start a recording with system audio turned on, Screenflick switches the system-wide default audio output device to the "Soundflower" virtual audio device, which Screenflick then uses as an input to record audio from. Launch the program which plays the audio after you start a Screenflick recording.

Screen Recorder, Desktop Recorder to Capture Screen to Video | Screen Recording Software DemoCreator Why Choose Wondershare DemoCreator DemoCreator is a powerful yet simple screen recorder program which allows you to capture desktop activities and create video tutorials, demonstrations and presentations without any programming skills. After recording every mouse movement, click and keystrokes, you can easily enhance the videos with notes, callouts and effects such as pan-zoom and animations, and then publish as video, flash-based demos, or LMS compatible packages. It's a must for technical support & marketing staff, educator and e-learning creator. Note: The current version is not fully compatible with Windows 7. Flexible Recording Settings Record any area of desktop: Custom size, Application & Full screen. Record your screen in your way: Take screen shot recording, full motion recording, additional recording and multiple projects integration. Record with sound: Record what you say (microphone) or what you hear from your computer, and edit with built-in editor. Rich Illustration Objects

Zebra Screen Recorder Zebra-Media 2005-2012 © All Rights Reserved. You pay for the program only the first time and get all new versions of this program for FREE and for lifetime! Zebra Screen Recorder captures your PC desktop activity into standard MPEG or AVI video files. It records everything you see on the computer screen, including the entire desktop, windows, menus, cursors - even video with sound. Screen ruler allows you to accurately capture anything on your screen. You can use Zebra Screen Recorder to demonstrate features of a web site or program, make tutorials, presentations, or any other task that requires showing screen activity. After completion of payment, you will receive detailed information on the Product Activation in a separate e-mail, which will contain a attached universal key-file. Zebra Screen Recorder v.1.3 Powered by Translate