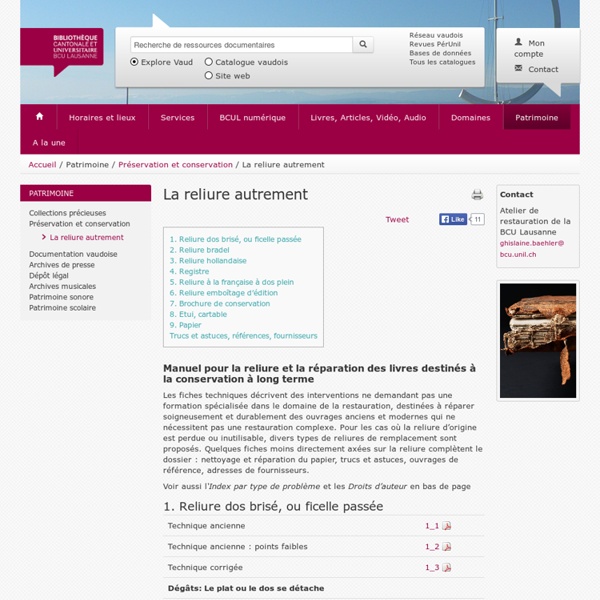 Bookbinder of the Month: Mark Cockram – Flash of the Hand Bound in 2010, this is just one binding of Lysistrata that Mark Cockram has bound. Grabbing illustrations from the text for both the cover design, doublures and endpapers; Mark transforms them into a visual experience rarely seen on a book. The cover mimics that of a fresco painting. The book was bound in fair goat which was hand-dyed and the design was initially blind tooled onto the leather. This binding is by far my most favorite from your portfolio. Though gold leaf and other metals are used in bookbinding, gold leaf and the like tend to be used in a static manner. With the 2010 Lysistrata I wanted to echo the illustrations in the text block. I do not think that I have to say that in some of my work I am spontaneous with the 2010 Lysistrata captureing some of that working style.

Tutorial: Top Secret Belgian Binding – Flash of the Hand The Secret Belgian binding is just one of many structures on my long list models to make. With the aid of a tutorial posted on the BookArtsWeb tutorial and references page, I was on my way to checking this structure off my list. Unfortunately the link seems to be broken now. *This tutorial is for a modified version I’m calling the Top Secret Belgian. MATERIALS: – binder’s board for 2 covers and 1 spine piece– decorative paper– paper to line covers and spine piece (aka paste downs)– colored thread– text block (3-5 signatures, about 3-4 folios each)– PVA– wax TOOLS: – needle– bone folder– glue brush– scalpel (preferably with curved blade)– x-acto– scissors– pencil– triangle– awl– dividers (optional) STEP ONE: For this tutorial I bound a copy of The Yellow Wallpaper by Charlotte Perkins Gilman. From the text block, measure the height of the signature and add about 5-7mm. The height of the spine piece will be the same as the covers. cover height: 208mmcover width: 125mm Ta-da!

Here’s looking at you kid: Under the microscope with leather - Collection Care blog We recently posted about parchment and how our conservators treat parchment collection items, but what is the difference between leather and parchment? Parchment and leather are both made from animal pelts, but parchment does not undergo tanning as leather does. The process of tanning traditionally used tannin which is an acidic chemical compound making material less prone to decomposition - including molting and holding odours. Good leather is waterproof and more durable than parchment. These properties have led to leather being used for clothing, footwear, upholstery, armour, and as a writing material. Due to the variety of material in our collections, we have samples of different animal leathers in our conservation studios. Calf The most frequently used tanned skin for binding was calfskin. Figure 1: Calf leather at 100x magnification Goat Microscopy of goat leather shows two rows of follicles of different sizes indicative of a two-coated fleece. Kid Sheep Bookbinding leather Red rot

Bookbinding Technique of the Month | The American Bookbinders Museum It seems to me an interest in bookbinding is an interest that goes beyond the love of books and the act of reading: it’s really a preoccupation with how things come to be, an origin story for an object so ubiquitous we forget it had to be sewn and stitched together in the first place. It’s a desire to know where this amazing thing comes from. For me, it’s not only an aesthetic interest in the formal object but one that I know stems from wanting desperately to understand how those written words or printed images came into existence, in all senses, how they got on that page, how the ideas of another ended up in front of me. Big statement: Bookbinding (with a capital B) is an attempt to apprehend the genius of art through the mechanics of its physical production. Like if I break it down enough—if I can identify the correct execution of a Coptic stitch—all will become clear. We began, as all books do, with the page(s). This—compact, exposed 72-page assemblage—is the book block.

Making an Islamic Binding | Current Projects Making an Islamic Binding Posted by hjones78 on September 25, 2014 · 3 Comments By Hillary Jones From the earliest surviving examples in the 9th century, Islamic binding represents not only the incredibly varied talents of centuries of artists, but also the historical influences of the Islamic culture, and the mixing of Islamic artistic traditions across both kingdoms and continents. In May 2014, the book conservation postgraduates faced the task of condensing this long-standing and rich tradition into three intensive but rewarding days. Under the leadership of Kristine Rose, Conservator of Manuscripts and Printed Books at the Fitzwilliam museum, we completed our own generalised Type-II Islamic binding models. A Bit of History: The Islamic codex was developed in part due to a need for a complete and tangible recording of the Qur’an that could be easily transported as Islam spread. So you want to make a model? One quire—made up of 2 folded sheets of A4 printer paper. To Create the Textblock:

Thoughts About Board Shears | jeff peachey Depictions of standing and lying presses tend to be very popular logos for bookbinders and conservators, but an image of a board shear might more accurately symbolize current hand bookbinding practice. More than any other tool or machine in a bindery, the board shear demarcates the difference between in-boards binding and case binding, it highlights the difference between the late 18th and early 19th centuries binding styles, it marks a major shift in the role of bookbinders from artisan to worker, and often today it reflects difference between an amateur and professional binder. A board shear does one thing, it cuts a piece of cloth, board or paper at 90 degrees quickly and accurately. Physically, the board shear is often the largest machine in a hand bindery. My relatively small 19th C. 30″ Jacques takes up about 20 square feet. It quite heavy and expensive as well. The earliest publishers case bindings appear around 1810, and the board shear around 1840. Click here Click here

Badger and Chirp: Bookbinding 101: Decorative Paper There are thousands of options for using decorative paper in your handmade books. Links at the bottom of this post are places where the papers discussed below can be found. Following are seven short HD videos showing several popular types of bookbinding papers. Although video isn't quite the same as holding a paper in hand, it's actually does a decent job of giving a sense of what a paper is like, much better than a still photo can do. Hopefully these can help you, whether a new or experienced bookbinder, gain a sense of papers you may not have handled before. We'll be going over papers from around the world (Thailand, India, Nepal, Japan, Mexico, Canada, Italy, France and the U.S.) The papers we will be showing you are made with projects like bookbinding in mind. A few words about scrapbook paper: Scrapbook paper is meant to be cut, stamped, written on and glued onto. Part 1: Unryu and papers from Thailand: Part 2: Lokta paper from Nepal Part 3: Papers from India Part 4: Japanese Papers

Save America's Treasures - Michigan State University Libraries After the photodocumentation was complete, the triage operation began. With a database to produce lists and totals, books could be categorized according to broad complexity of treatment. Almost all of the books would benefit from deacidification, but beyond that, they were divided according to what other treatments they needed: minor repairs, major repairs, or housing. Those needing major repairs were sent to the conservation lab.